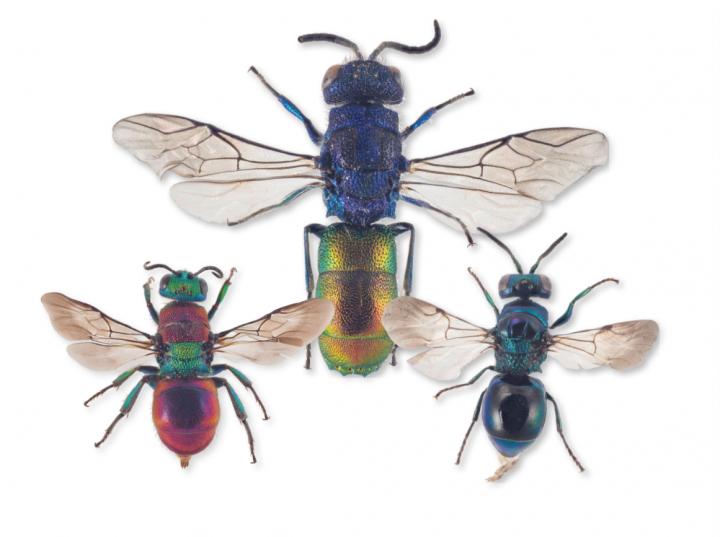 IMAGE: There are a total of over 2,500 described golden wasp species, with 40 recorded in Norway.

Cuckoo wasps - also called emerald wasps - are some of the most beautiful insects we have, with colourful exteriors that shine like jewels. However, these beauties have also created a lot of headaches.

"Normally we distinguish insects from each other by their appearance, but cuckoo wasps are so similar to each other that it makes it difficult," says Frode Ødegaard.

Ødegaard is an insect researcher at the NTNU (Norwegian University of Science and Technology) University Museum and belongs to the European research group that has now described thia recent contribution to species diversity. The new species is very rare, and is only a single specimen has been found on the Lista peninsula in Agder county in Norway.

For more than 200 years, insect researchers have struggled to sort cuckoo wasps into the right "species boxes," and to determine which characteristics are variations within a species and which are species-specific differences.

In the last 10 years, DNA barcoding has brought about a major breakthrough by making it possible to distinguish different species of cuckoo wasps from each other by looking at the differences in their genetic material.

"But it's not always that easy, either. In this case, we had two cuckoo wasps with microscopic differences in appearance and very small differences in DNA," Ødegaard says.

"The next step was to look at the language of each of the wasps to find out if they belonged to different species," he says.

Insects communicate with each other through pheromones - in other words, they have a chemical language. Very closely related species often have completely different languages to prevent them from interbreeding.

The cuckoo wasp is an insect with above-average linguistic abilities. They are parasites, which means that they behave like cuckoos and lay their eggs in the nests of other bees and wasps. The larvae grow quickly and hatch before the host's eggs. Then they eat the eggs, the larvae and the food supply that the host has arranged in the nest.

"When you live as a parasite, it's important not to be discovered, and therefore the cuckoo wasp has also learned the language of its host," says Ødegaard.

By conducting an ever-so-small language study, the researchers were able to discover that the two almost identical cuckoo wasps did indeed belong to different species. They use different hosts - and that means that they also speak completely different languages.

"The evolutionary development associated with sponging off another species happens very fast. That's why you can have two species that are really similar genetically but still belong to different species," says Ødegaard.

When a new species is described it has to be given a name, and Frode Ødegaard had the good fortune to receive the honour of naming the newcomer.

"A naming competition was announced among researchers in Europe who work with cuckoo wasps, and then the proposals that came in were voted on. It turned out my proposal actually got the most votes!" Ødegaard says.

"As mentioned, the new wasp is very similar to another species called Chrysis brevitarsis, so the new species was named Chrysis parabrevitarsis, which means 'the one standing next to brevitarsis'."

Ødegaard was also responsible for giving the species its slightly simpler Norwegian name of sporegullveps. He makes no secret of the fact that he found it great to be able to name a new species.

"In a way, you place yourself in the perspective of eternity, because that species will always have that name. There's something very fundamental about it."

The only known specimen of this cuckoo wasp has been captured and pinned in an insect collection. So it may seem both morally reprehensible and unnecessary that this one lone individual was stuck onto a needle.

"Even with today's advanced methods, using live animals for studies like this isn't possible, but collecting individual specimens fortunately has no impact on the population," Ødegaard says.

"The insects have enormous reproductive potential, and the size and quality of the habitats are what determine the viability of the population, not whether any specimens are eaten by birds or collected by an insect researcher."

He adds that the collected insects are absolutely crucial for researchers to be able to map and describe their diversity and thus take care of viable populations for posterity.