A new twist on quantum communication in fiber 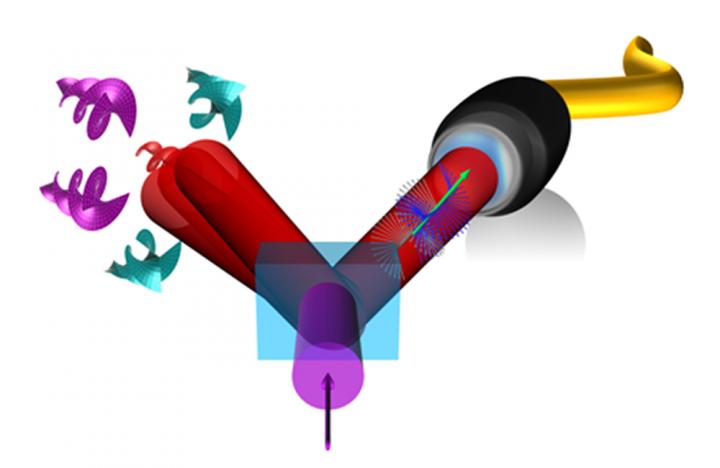 New research done at the University of the Witwatersrand in Johannesburg, South Africa, and Huazhang University of Science and Technology in Wuhan, China, has exciting implications for secure data transfer across optical fibre networks. The team have demonstrated that multiple quantum patterns of twisted light can be transmitted across a conventional fibre link that, paradoxically, supports only one pattern. The implication is a new approach to realising a future quantum network, harnessing multiple dimensions of entangled quantum light.

Science Advances today, published online the research by a team led by Professor Andrew Forbes from the School of Physics at Wits University in collaboration with a team lead by Professor Jian Wang at HUST. In their paper titled: Multi-dimensional entanglement transport through single mode fiber, the researchers demonstrate a new paradigm for realising a future quantum network. The team showed that multiple patterns of light are accessible after a communication link of conventional optical fibre, that paradoxically can only support a single pattern. The team achieved this quantum trick by engineering entanglement in two degrees of freedom of light, polarisation and pattern, passing the polarised photon down the fibre and accessing the many patterns with the other photon.

"In essence, the research introduces the concept of communicating across legacy fibre networks with multi-dimensional entangled states, bringing together the benefits of existing quantum communication with polarised photons with that of high-dimension communication using patterns of light," says Forbes.

A new twist, a new paradigm

Present communication systems are very fast, but not fundamentally secure. To make them secure researchers use the laws of Nature for encoding by exploiting the quirky properties of the quantum world, such as in the case of the use of Quantum Key Distribution (QKD) for secure communication.

"Quantum" here refers to the spooky action at a distance so abhorred by Einstein: quantum entanglement. In the last few decades, quantum entanglement has been extensively explored for a variety of quantum information protocols, notably making communication more secure through QKD. Using so-called "qubits" (2D quantum states) the information capacity is limited but it is easy to get such states across fibre links using polarisation as a degree of freedom for the encoding. The spatial pattern of light, its pattern, is another degree of freedom that has the benefit of high-dimensional encoding. There are many patterns to use, but unfortunately this requires custom fibre optical cable and so unsuitable to already existing networks. In the present work, the team have found a new way to balance these two extremes, by combining polarisation qubits with high-dimensional spatial modes to create multi-dimensional hybrid quantum states.

"The trick was to twist the one photon in polarisation and twist the other in pattern, forming "spirally light" that is entangled in two degrees of freedom," says Forbes. "Since the polarisation entangled photon has only one pattern it could be sent down the long-distance single-mode fibre (SMF), while the twisted light photon could be measured without the fibre, accessing multi-dimensional twisted patterns in the free-space. These twists carry orbital angular momentum (OAM), a promising candidate for encoding information."

Quantum communication with high-dimensional spatial modes (for example OAM modes) is promising but only possible in specially designed multi-mode fibre, which however, is greatly limited by mode (pattern) coupling noise. Single-mode fibre is free of this "pattern coupling" (which degrades entanglement) but can only be used for two-dimensional polarisation entanglement.

"The novelty in the published work is the demonstration of multi-dimensional entanglement transport in conventional single-mode fibre. The light is twisted in two degrees of freedom: the polarisation is twisted to form spirally light, and so is the pattern. This is referred to as spin-orbit coupling, here exploited for quantum communication," says Forbes. "Each transmission is still only a qubit (2D) but there are an infinite number of them because of the infinite number of twisted patterns we could entangle in the other photon."

The team demonstrated transfer of multi-dimensional entanglement states over 250 m of single-mode fibre, showing that an infinite number of two-dimensional subspaces could be realised. Each subspace could be used for sending information, or multiplexing information to multiple receivers.

Credit:
University of the Witwatersrand
January 24, 2020