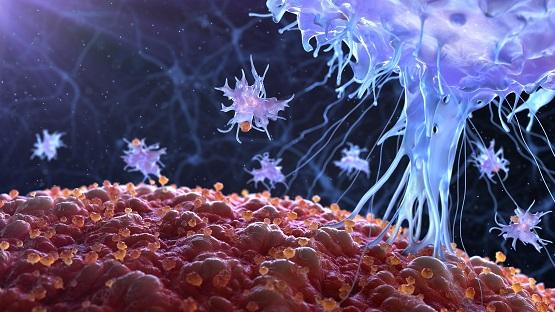 A collaborative study led by Monash University's Biomedicine Discovery Institute and the Olivia Newton-John Cancer Research Institute (ONJCRI) has uncovered new markers (HLA-associated peptides) that are uniquely present on melanoma tumours and could pave the way for therapeutic vaccines to be developed in the fight against melanoma.

Despite all improvements in melanoma treatment, every five hours one Australian dies because of the lack of effective treatment. A promising new approach harnesses the body's own immune system to detect and kill tumour cells, through recognition of small tumour specific protein fragments (peptides) that decorate the surface of the tumour cells. The study, published in Cancer Immunology Research, a journal of the American Association for Cancer Research, has successfully identified thousands of peptides uniquely present on melanoma tumours that can be recognised by the immune system.

These observations have had an immediate clinical application, with the first clinical study on vaccination of melanoma patients using spliced peptides underway with collaborators at the Parker Institute for Cancer Immunotherapy, USA.

"We considered how a melanoma tumour might 'look' to the human immune system, under different growth conditions. The sheer scope of melanoma peptides that we identified in this study, many of which have never been reported before, was both surprising and inspiring," said Dr Woods.

Findings have shown that some of these melanoma peptide markers are generated from a process called splicing. In splicing, a protein is first cut into small pieces (peptides) and then two of these pieces are pasted together to make a "spliced peptide". By identifying the exact spliced peptides, they can be synthesised outside of the body, then administered to patients to trigger the immune system into recognising and targeting tumours.

"The general goal of our study was to find new targets for melanoma treatment. We were unaware of the existence, prevalence and importance of these unique spliced peptides or if they could be recognised by the immune system. Now that we know they can, these peptides can be used as bait for the immune system to take action," Dr Faridi said.

Dr Andreas Behren, Head Tumour Immunology Laboratory at ONJCRI said: "Our finding, that we can successfully identify spliced melanoma peptides that are immunogenic across different patients, is very exciting."

Professor Purcell notes: "Based on these studies, spliced peptide antigens have moved from an immunological curiosity to a whole new class of actionable targets not just in melanoma but other cancers as well. Using Dr Faridi's new workflow we have been able to shine a spotlight on this previously ignored class of peptides opening up a previously untapped resource for immunotherapy and cancer vaccination. Indeed, the ubiquitous nature of this splicing process point towards this class of antigens playing roles in infectious disease, autoimmunity and allergy.