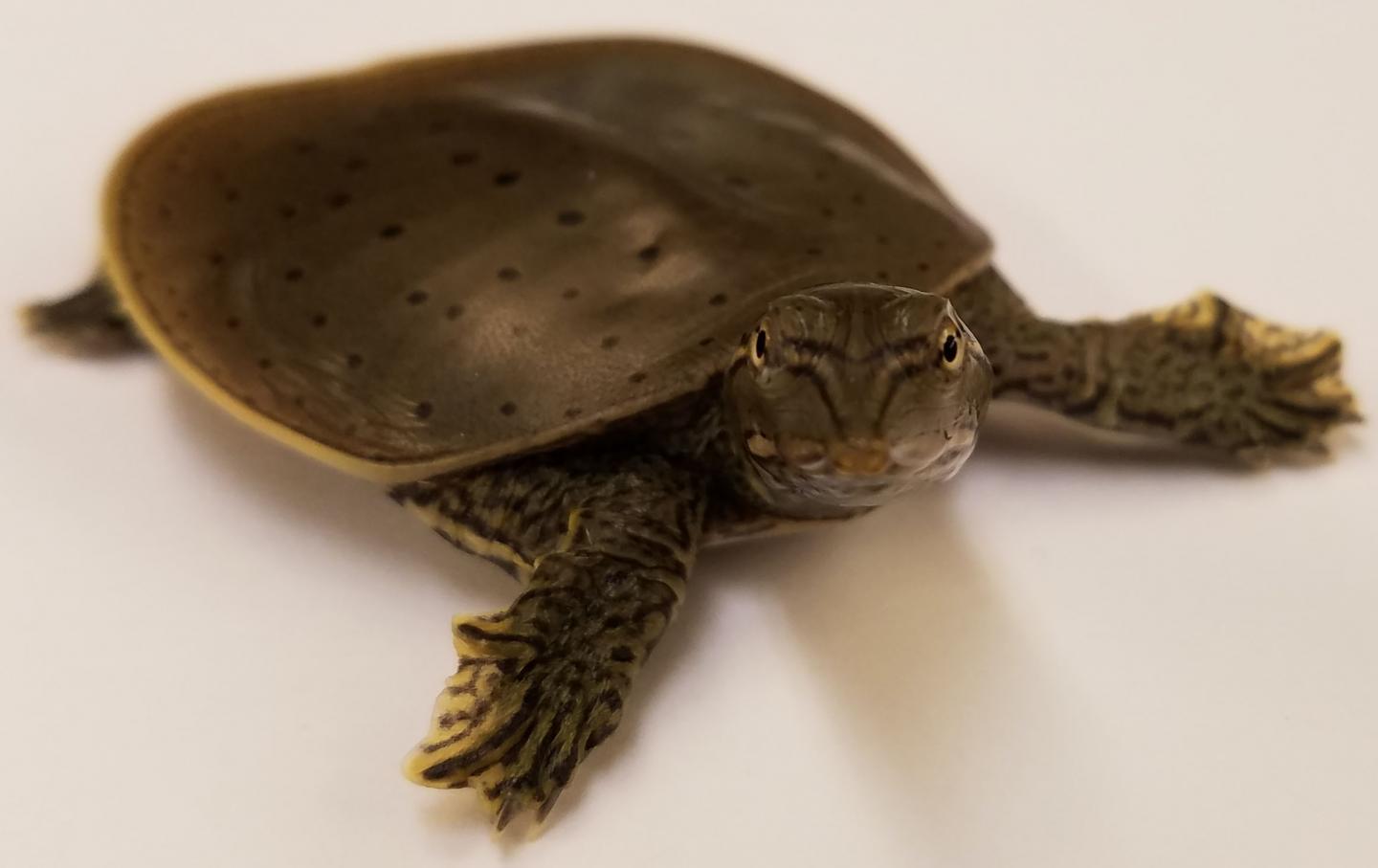 image: The species of turtle involved in the study is Apalone spinifera, a species of freshwater turtles native to North America. But the researchers say their findings shed light on the evolutionary role of sex chromosome dosage compensation in many species.

AMES, Iowa - A new study led by an Iowa State University scientist sheds light on how organisms have evolved to address imbalances in sex chromosomes.

The study looks at a species of softshell turtle, but the results could help to illuminate an important evolutionary process in many species, said Nicole Valenzuela, professor of ecology, evolution and organismal biology and lead author of the study.

The study focused on a species of softshell turtle known as Apalone spinifera, which are among the largest of freshwater turtles and inhabit a large portion of North America, including Iowa. But the research could help scientists understand the process in other organisms as well. The study also could generate better understanding of how disease can arise if the SCDC process doesn't function correctly.

"Understanding the diversity of SCDC mechanisms in nature, how they happen and evolve, informs more broadly on how animals and humans compensate for gene dose imbalance, and why the failure to properly compensate for these differences leads to disease states," Valenzuela said.

The study was published this week in the peer-reviewed scientific journal Philosophical Transactions of the Royal Society B.

What is sex chromosome dosage compensation?

The Z chromosomes contain instructions for some of the proteins normally functioning cells should produce, and having only a single copy of a chromosome can result in a reduced amount of proteins produced, because protein production is often affected by the number of gene copies. More copies means more protein production. Thus, unevenness in the number of copies of genes that work together can lead to developmental, physiological or other disorders. But SCDC mechanisms work to upregulate, or increase the level, of protein production from genes in the single Z (or X) chromosomes. The importance of maintaining a proper balance is made evident by diseases caused by abnormal numbers of sex chromosomes, including Klinefelter syndrome and Turner syndrome in humans, and Valenzuela said these processes have evolutionary and health implications in many other organisms as well.

Valenzuela and her co-authors sampled softshell turtles at various stages of development, including embryos, young hatchlings and adults, and analyzed various tissues to determine which genes were activated. The researchers then compared the activity of genes from sex chromosomes and from autosomes, broken down by male and female turtles.

The study represents not only the first such study to analyze sex chromosome dosage compensation in turtles, but the findings also show that remarkably, temperature appears to affect the SCDC process in the turtles. Valenzuela has studied temperature-dependent sex determination (TSD), or the way environmental temperatures influence whether a turtle embryo develops into a male or female in species that lack sex chromosomes, in previous research. But because softshell turtles lost this ancestral TSD system, this thermal sensitivity in the SCDC came as a surprise, she said. And the way in which softshell turtles carry out SCDC is also unusual and complex.

The study found that both sexes of softshell turtles double the activity of the Zs in early embryonic development, which fixes the expression imbalance in ZW females (twice Z expression now matches autosomal expression). But this same response creates an imbalance in males (Z expression now doubles autosomal expression). At later embryonic stages, male Z expression decreases, and this effect is more pronounced at cooler than at warmer incubation temperatures, according to the study. Valenzuela said the new study is likely the first to show that temperature can impact SCDC not just in turtles, or in animals, but as broadly as in eukaryotes, or organisms in which genetic material is contained in a cell nucleus. Eukaryotic species include a huge range of organisms, including animals, plants and fungi.