A new role for a tiny linker in transmembrane ion channels 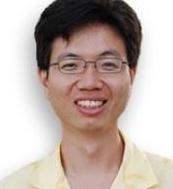 IMAGE: Jianhan Chen at UMass Amherst reports new results on calcium-gated ion channels. Besides advancing knowledge, an important part of the discovery relates to the many other domain-to-domain linkers in membrane...

AMHERST, Mass. - In the molecular-level world of ion channels - passageways through membranes that carry signals in a cell's environment and allow it to respond - researchers have debated about the role of a small piece of the channel called a linker, says computational biophysicist Jianhan Chen at the University of Massachusetts Amherst.

The linker communicates between the pore and its environment-sensing apparatus, and knowing its function - whether it's inert or plays an active sensing role - has been unclear. But it might lead to a new target for drugs and treatment in conditions such as hypertension, autism, epilepsy, stroke and asthma, he adds. Now, Chen and colleagues at Washington University report in eLife that their experiments have revealed "the first direct example of how non-specific membrane interactions of a covalent linker can regulate the activation of a biological ion channel."

Specifically, Chen and co-first authors Mahdieh Yazdani and Zhiguang Jia at UMass Amherst, with co-first author Guohui Zhang, Jingyi Shi and Jianmin Cui at Washington University, studied a pore called the large-conductance potassium (BK) channel. It is important in muscle and neuron function and is controlled by calcium concentration via a calcium-sensing domain. It is also controlled by electrical potential through a voltage-sensing domain. Either way, it opens and closes like a gate - "a really common architecture in transmembrane receptors and channels," Chen says.

A single, tiny "C-linker" connects the BK calcium sensor and pore and until now was believed to be largely an inert connection. To study it, Chen says, "The traditional approach, if you suspect a specific position of the protein is important, is to mutate it and see what happens. You replace one amino acid with another. But with this method, you could end up perturbing many things; it's hard to tell what you've done."

Instead, the researchers scrambled the C-linker amino acid sequence many times. "If you do enough scrambles, you create so many different effects that you can average them. If the function isn't changed and all the repetitions look basically the same, nothing will stand out," Chen notes. "This will also give you a clean background so that next you can test some specific force or type of interaction that the linker might be involved in."

They discovered that scrambling the linker dramatically affected BK activation, supporting the notion that the linker is more than an inert connection, he adds. Surprisingly, computational analysis predicted that it was nonspecific linker-membrane interactions, not the sensor or pore, that led to different channel properties.

To test this new mode of channel regulation, Zhang at Washington University conducted "two really elegant experiments," Chen says. He built a shorter version of the channel without the calcium sensor but leaving its voltage-sensing function intact. "If our hypothesis is correct, in this construct the linker scramble would affect this truncated channel in a similar fashion as in the full-length channel. And if the linker does react without the calcium domain there, the linker is interacting with something else," he adds.

That proved to be the case. Further, they took one of the scrambling mutants and removed the "membrane-anchoring" segment that interacted with the membrane, he says. "We show that this single change completely reverses the linker scrambling effect. This one particular anchoring piece is responsible for the functional differences we observed."

Besides advancing knowledge, Chen explains, an important part of the discovery relates to the many other domain-to-domain linkers in membrane proteins. "Now we must really consider that the linker itself is part of the sensing apparatus, rather than just a connection. It's a new way to think about it. Our study is a really strong argument that the linker is a lot more important than some people thought."

He adds, "We don't discuss a direct application to disease, but this paper offers an important insight. We think it's going to spark others to do more. It could offer a new way to design drugs because now you can also think about also targeting the linker, not only the sensing domain or the pore itself. It gives you one more possibility."