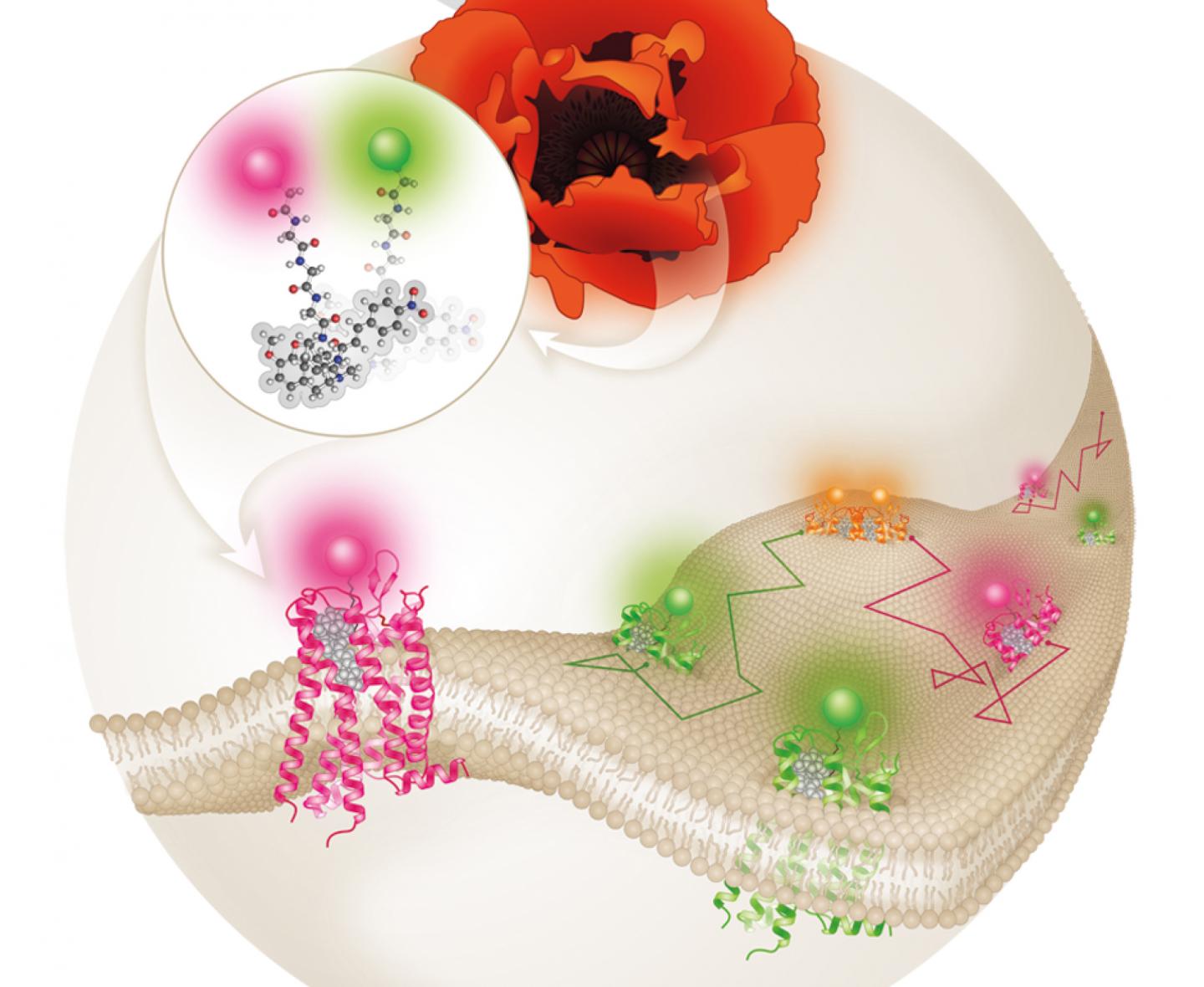 IMAGE: Using special ligands, it was possible to prove that opioid receptors are also present as pairs of two in the cell membrane.

Strong painkillers are very important in the management of patients with cancer and heart attack or requiring surgery. They extert their effect by binding to so-called opioid receptors in the body.

These painkillers have excellent efficacy, but also severe side effects. On the one hand, there is the danger of dependency, on the other hand, patients may become tolerant - i.e. the effectiveness of the drugs decreases with repeated use. This means that the dose must be increased over time to achieve the same effect.

Painkillers with less drastic undesirable effects and equally good efficacy would therefore be highly desirable. Michael Decker, Professor of Pharmaceutical and Medicinal Chemistry at Julius-Maximilians-Universität (JMU) Würzburg, in Bavaria, Germany, is pursuing research in this field. Among other things, his team wants to expand the basic knowledge about opioid receptors.

Decker now presents new findings in this field in the journal "Angewandte Chemie" together with Sébastien Granier from the Institut de Génomique Fonctionelle in Montpellier, Peter Gmeiner from the University of Erlangen-Nuremberg, and as main collaborator Professor Davide Calebiro from the University of Birmingham, UK. The JMU PhD students Christian Gentzsch, Kerstin Seier, and Antonios Drakopoulos were also involved in the work.

The team dealt with a question that has been highly debated in the field so far. "It is still unclear whether the analgesic effect of opioids is mediated by individual receptors or whether it is necessary for the receptors to aggregate into pairs or larger molecular complexes," said Decker. Evidence has already been found for all these possibilities.

"Our results help reconciling some of the previously contradictory observations," says Davide Calebiro, who until recently was a researcher at JMU. "We found that most opioid receptors exist as individual entities in the cell membrane. However, a small proportion forms pairs of two. Although the lifespan of these pairs is short, they might contribute to the function of this important family of receptors."

This finding might be very important: "There is evidence that the receptor pairs have different pharmacological effects than individual receptors," said Decker. Therefore, it might be possible to develop new painkillers with a more favourable effect profile on the basis of this knowledge.

Due to the importance of these new findings, "Angewandte Chemie" has classified the publication of the JMU researchers as "highly important". It is freely available on the Web. In addition, the work was selected for one of the journal covers.

The research team came to its conclusion because it had previously developed highly selective fluorescent ligands for a subtype of the receptors, the so-called mu opioid receptor (MOR). This is the most important of the three receptor subtypes and is responsible for the desired pain-relieving but also for the addictive effect. The new ligands can be used as molecular probes to label the receptor highly specifically and to observe its behaviour in living cells using single-molecule fluorescence microscopy.