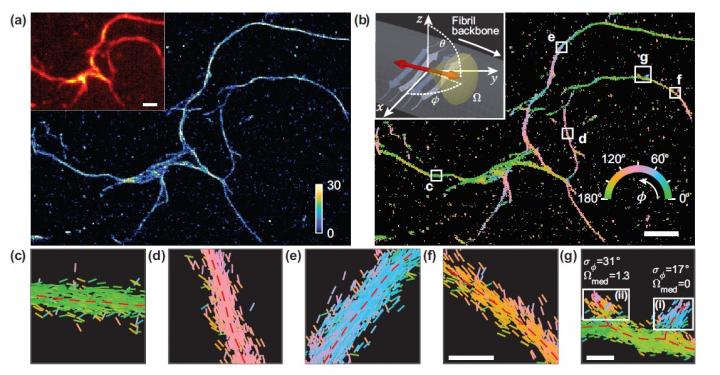 IMAGE: Researchers developed a microscopy technique that measures the location and orientation of single molecules and used it to study the structural details of amyloid protein aggregates. (a) Single-molecule...

WASHINGTON -- Neurodegenerative diseases such as Alzheimer's and Parkinson's are often accompanied by amyloid proteins in the brain that have become clumped or misfolded. A newly developed technique that measures the orientation of single molecules is enabling optical microscopy to be used, for the first time, to reveal nanoscale details about the structures of these problematic proteins.

"Neurodegenerative disorders such as Alzheimer's and Parkinson's diseases are leading causes of death all over the world," said Tianben Ding, co-first author of the new paper. "We hope our single-molecule orientation imaging approach can provide new insights into amyloid structure and possibly contribute to the future development of effective therapeutics against these diseases."

Biological and chemical processes in the brain are driven by complicated movements and interactions between molecules. Although most amyloid proteins may be non-toxic, the misfolding of even a few could eventually kill many neurons.

"We need imaging technologies that can watch these molecular movements in living systems to understand the fundamental biological mechanisms of disease," explained Matthew D. Lew, leader of the research team. "Amyloid and prion-type diseases like Alzheimer's, Parkinson's and diabetes are our first targets for this technology, but we see it being applied in many other areas too."

Lew's lab has developed several single-molecule super-resolution microscopy methods that measure the orientation and location of fluorescent molecules attached to single proteins. The orientation information is obtained by measuring not only the location of fluorescence in the sample but also characteristics of that light, such as polarization, which are typically ignored in most other microscopy approaches.

In their Optica article, the researchers described a performance metric they designed to characterize how sensitively various microscopes can measure orientations of fluorescent molecules. Using the new performance indicator, the researchers found that a microscope that splits fluorescence light into two polarization channels (x and y) provides superior and practical orientation measurements.

"The metric we developed calculates the performance of a particular microscope design 1,000 times faster than before," said Tingting Wu, co-first author of the work. "By measuring the orientations of single molecules bound to amyloid aggregates, the selected microscope enabled us to map differences in amyloid structure organization that cannot be detected by standard localization microscopes."

Since there is no artificial link between the fluorescent probes and amyloid surfaces, the probes' binding orientation to the amyloid surfaces conveys information about how the amyloid protein itself is organized. The researchers quantified how the orientations of fluorescent molecules varied each time one attached to an amyloid protein. Differences in these binding behaviors can be attributed to structure differences between amyloid aggregates. Because the method provides single-molecule information, the researchers could observe nanoscale differences between amyloid structures without averaging out details of local features.

"We plan to extend the method to monitor nanoscale changes within and between amyloid structures as they organize over hours to days," said Ding. "Long-term studies of amyloid aggregates may reveal new correlations between how amyloid proteins are organized and how quickly they grow or spontaneously dissolve."

The researchers note that the set-up they used for orientation-localization microscopy consisted of commercially available parts that are accessible to anyone performing single-molecule super-resolution microscopy. Their analysis code is available at https://github.com/Lew-Lab/RoSE-O.

"In optical microscopy and imaging, scientists and engineers have been pushing the boundaries of imaging to be faster, probe deeper and have higher resolution," said Lew. "Our work shows that one can shed light on fundamental processes in biology by, instead, focusing on molecular orientation, which can reveal details about the inner workings of biology that cannot be visualized by traditional microscopy."