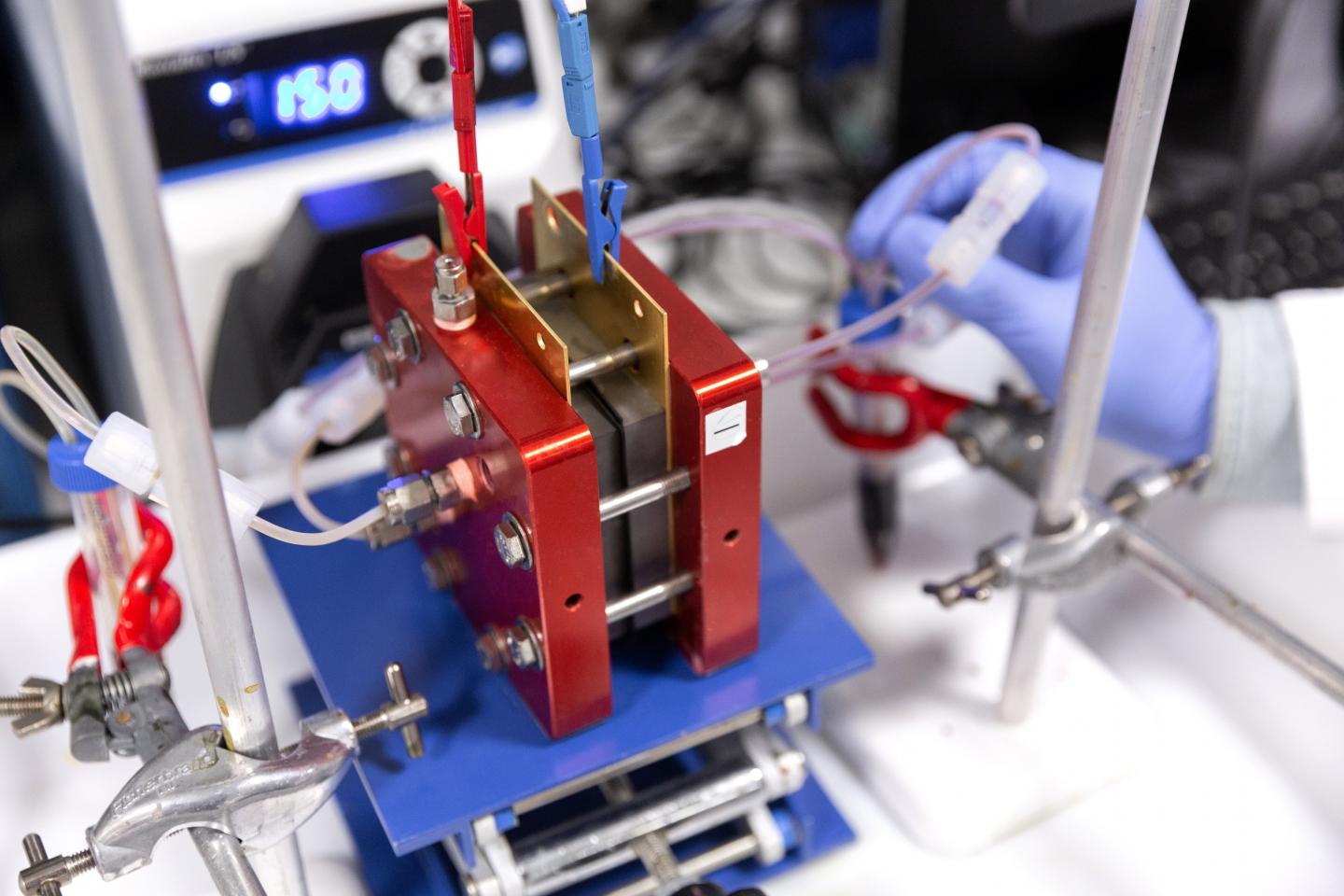 IMAGE: A redox flow battery which could be scaled up for grid scale energy storage.

The new approach to ion exchange membrane design, which is published today in Nature Materials, uses low-cost plastic membranes with many tiny hydrophilic ('water attracting') pores. They improve on current technology that is more expensive and difficult to apply practically.

Current ion exchange membranes, known as Nafion, are used to purify water and store renewable energy output in fuel cells and batteries. However, the ion transport channels in Nafion membranes are not well defined and the membranes are very expensive.

In contrast, low-cost polymer membranes have been widely used in the membrane industry in various contexts, from removal of salt and pollutants from water, to natural gas purification - but these membranes are usually not conductive or selective enough for ion transport.

Now, a multi-institutional team led by Imperial's Dr Qilei Song and Professor Neil McKeown at the University of Edinburgh has developed a new ion-transport membrane technology that could reduce the cost of storing energy in batteries and of purifying water.

They developed the new membranes using computer simulations to build a class of microporous polymers, known as polymers of intrinsic microporosity (PIMs), and alter their building blocks for varying properties.

Their invention could contribute to the use and storage of renewable energy, and boost the availability of clean drinking water in developing nations.

Lead author Dr Song, of Imperial's Department of Chemical Engineering, said: "Our design hails a new generation of membranes for a variety of uses - both improving lives and boosting storage of renewable energy such as solar and wind power, which will help combat climate change."

The polymers are made of rigid and twisted backbones, like fusilli pasta. They contain tiny pores known as 'micropores' that provide rigid, ordered channels through which molecules and ions travel selectively based on their physical sizes.

The polymers are also soluble in common solvents so they can be cast into super-thin films, which further speeds up ion transport. These factors mean the new membranes could be used in a wide range of separation process and electrochemical devices that require fast and selective ion transport.

The team demonstrated that their membranes were highly selective when filtering small salt ions from water, and when removing organic molecules and organic micropollutants for municipal water treatment. Dr Song said: "Such membranes could be used in water nanofiltration systems and produced at a much larger scale to provide drinking water in developing countries."

They are also specific enough to filter out lithium ions from magnesium in salt water - a technique that could reduce the need for expensive mined lithium, which is the major source for lithium ion batteries.

Dr Song said: "Perhaps now we can get sustainable lithium from seawater or brine reservoirs instead of mining under the ground, which would be less expensive, more environmentally friendly, and help the development of electric vehicles and large-scale renewable energy storage."

Batteries store and convert energy made by renewable sources like wind and solar, before the energy feeds into the grid and powers homes. The grid can tap into these batteries when renewable sources run low, such as when solar panels are not collecting energy at night.

Using their new-generation PIMs, the researchers designed cheaper, easily processed membranes with well-defined pores that let specific ions through and keep others out. They demonstrated the applications of their membranes in organic redox flow batteries using low-cost organic redox-active species such as quinones and potassium ferrocyanide. Their PIM membranes showed higher molecular selectivity towards ferrocyanide anions, and hence low 'crossover' of redox species in the battery, which could lead to longer lifetime of the battery.

Co-first author Rui Tan, a PhD researcher at the Department of Chemical Engineering, said: "We are looking into a wide range of battery chemistries that can be improved with our new generation of ion-transport membranes, from solid-state lithium-ion batteries to low-cost flow batteries."

The design principles of these ion-selective membranes are generic enough that they can be extended to membranes for industrial separation processes, separators for future generations of batteries such as sodium and potassium ion batteries, and many other electrochemical devices for energy conversion and storage including fuel cells and electrochemical reactors.

Co-first author Anqi Wang, also a PhD researcher at the Department of Chemical Engineering, said: "The combination of fast ion transport and selectivity of these new ion-selective membrane makes them attractive for a wide range of industrial applications."

Next, the researchers will scale up this type of membrane to make filtration membranes. They will also look into commercialising their products in collaboration with industry, and are working with RFC power, a spin-out flow-battery company founded by Imperial co-author Professor Nigel Brandon.