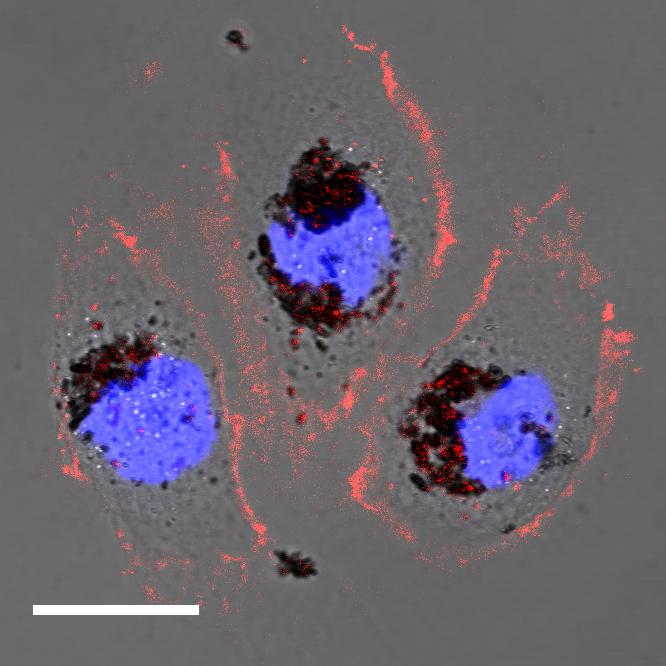 Northwestern University researchers have synthesized a new form of melanin enriched with selenium. Called selenomelanin, this new biomaterial shows extraordinary promise as a shield for human tissue against harmful radiation.

"Given the increased interest in space travel, and the general need for lightweight, multifunctional and radioprotective biomaterials, we've become excited about the potential of melanin," said Northwestern's Nathan Gianneschi, who led the research. "It occurred to our postdoctoral fellow Wei Cao that melanin containing selenium would offer better protection than other forms of melanin. That brought up the intriguing possibility that this as-yet undiscovered melanin may very well exist in nature, being used in this way. So we skipped the discovery part and decided to make it ourselves."

The research will be published online on Wednesday, July 8 in the Journal of the American Chemical Society, ahead of publication in the July print edition.

Gianneschi is the Jacob and Rosalind Cohn Professor of Chemistry in Northwestern's Weinberg College of Arts and Sciences and associate director of the International Institute for Nanotechnology. Cao is the paper's first author.

Melanin is found in most organisms across the plant and animal kingdoms, as well as in bacteria and fungi. Though best known for pigmentation, melanin also provides valuable protection from radiation. Five kinds of melanin have been observed in nature, with pheomelanin (the pigment in red hair) shown to absorb X-rays more efficiently than the more common eumelanin (black and brown pigments in dark hair).

Unwanted exposure to radiation occurs during many common activities, from air travel to X-ray diagnosis and clinical radiation therapy. It's an even greater consideration in extreme cases like a nuclear reactor malfunction or human space travel. NASA's landmark "Twins Study" showed damage to astronaut Scott Kelly's DNA from his year in orbit. An astronaut on a Mars mission could receive up to 700 times more radiation than on Earth.

Compared to the weight and bulk of traditional radioprotective materials like lead, melanin it is lighter and more flexible in how it can be used. Melanin samples are currently in orbit at the International Space Station, being studied by another research team for the material's response to radiation exposure. Recent studies have focused on pheomelanin, which contains sulfur, as the best candidate for that purpose.

Gianneschi's team hypothesized, however, that a new kind of melanin -- enriched with selenium instead of sulfur -- would provide better protection against X-rays. Selenium is an essential micronutrient that plays an important role in cancer prevention, and previous research reports that selenium compounds can protect animals against radiation. These compounds are found in normal human proteins, but have not been associated with melanin in nature before.

Gianneschi's team synthesized the new biomaterial, which they called "selenomelanin," and used it to treat living cells. For comparison, they also prepared cells treated with synthetic pheomelanin and eumelanin, as well as cells with no protective melanin.

After receiving a dose of radiation that would be lethal to a human being, only the cells treated with selenomelanin still exhibited a normal cell cycle.

"Our results demonstrated that selenomelanin offers superior protection from radiation," Gianneschi said. "We also found that it was easier to synthesize selenomelanin than pheomelanin, and what we created was closer than synthetic pheomelanin to the melanin found in nature."

Further testing with bacteria showed that selenomelanin can be biosynthesized, meaning that live cells fed with appropriate nutrients can then produce selenomelanin on their own -- and retain its radioprotective properties. In fact, although the researchers synthesized selenomelanin in their lab, they believe it may already be present in nature.

"With an abundant source of selenium in the environment, some organisms may have been able to adapt to extreme circumstances such radiation through the beneficial effects of selenomelanin," Gianneschi said.

"Our work points to the possibility that melanin may act as a repository for selenium, helping ensure that organisms benefit from it," said Cao. "Selenomelanin may play an important role in how selenium is metabolized and distributed biologically. It's an area for further investigation."

Gianneschi and his team envision that this new biomaterial could be applied to a person's skin, like a melanin-based sunscreen. It could also be used as a protective film to shield materials from radiation while in transit.