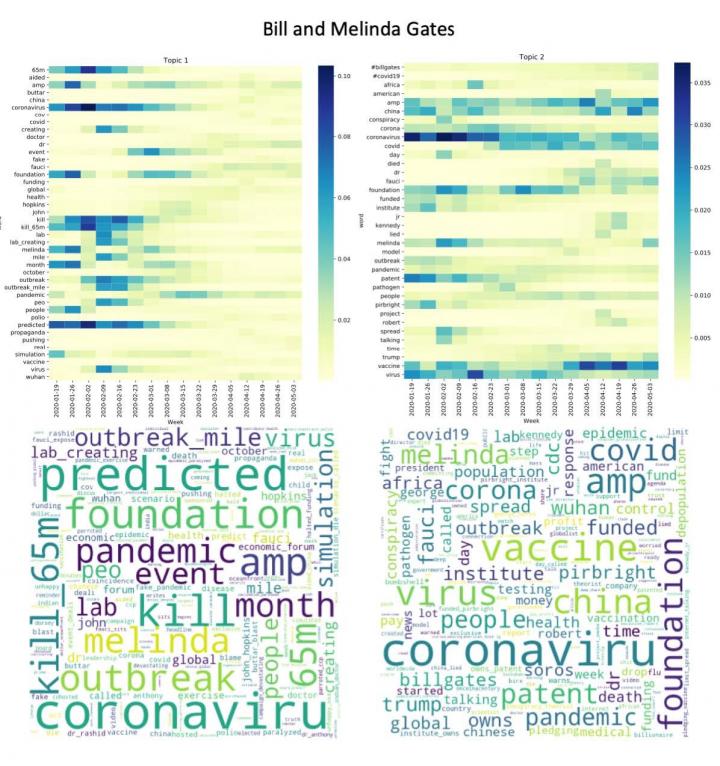 IMAGE: This image shows the change in word importance over time for tweets related to the Bill and Melinda Gates conspiracy theory. In the top panel, the x-axis represents time while...

"A lot of machine-learning studies related to misinformation on social media focus on identifying different kinds of conspiracy theories," said Courtney Shelley, a postdoctoral researcher in the Information Systems and Modeling Group at Los Alamos National Laboratory and co-author of the study that was published last week in the Journal of Medical Internet Research. "Instead, we wanted to create a more cohesive understanding of how misinformation changes as it spreads. Because people tend to believe the first message they encounter, public health officials could someday monitor which conspiracy theories are gaining traction on social media and craft factual public information campaigns to preempt widespread acceptance of falsehoods."

The study, titled "Thought I'd Share First," used publicly available, anonymized Twitter data to characterize four COVID-19 conspiracy theory themes and provide context for each through the first five months of the pandemic. The four themes the study examined were that 5G cell towers spread the virus; that the Bill and Melinda Gates Foundation engineered or has otherwise malicious intent related to COVID-19; that the virus was bioengineered or was developed in a laboratory; and that the COVID-19 vaccines, which were then all still in development, would be dangerous.

"We began with a dataset of approximately 1.8 million tweets that contained COVID-19 keywords or were from health-related Twitter accounts," said Dax Gerts, a computer scientist also in Los Alamos' Information Systems and Modeling Group and the study's co-author. "From this body of data, we identified subsets that matched the four conspiracy theories using pattern filtering, and hand labeled several hundred tweets in each conspiracy theory category to construct training sets."

Using the data collected for each of the four theories, the team built random forest machine-learning, or artificial intelligence (AI), models that categorized tweets as COVID-19 misinformation or not.

"This allowed us to observe the way individuals talk about these conspiracy theories on social media, and observe changes over time," said Gerts.

For example, Bill Gates participated in a Reddit "Ask Me Anything" in March 2020, which highlighted Gates-funded research to develop injectable invisible ink that could be used to record vaccinations. Immediately after, there was an increase in the prominence of words associated with vaccine-averse conspiracy theories suggesting the COVID-19 vaccine would secretly microchip individuals for population control.