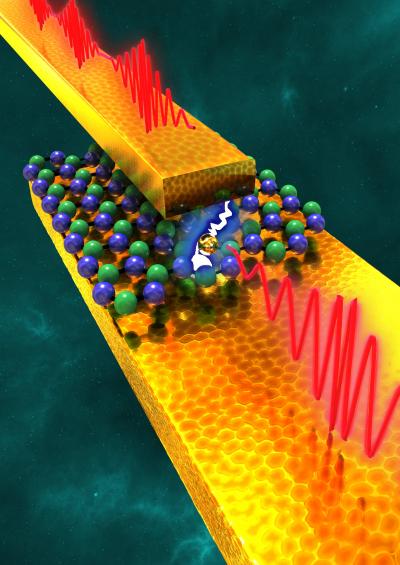 IMAGE: With US Army funding, researchers at The University of Texas at Austin and the University of Lille in France develop a radio-frequency switch that is more than 50 times more...

RESEARCH TRIANGLE PARK, N.C. -- As 5G hits the market, new U.S. Army-funded research has developed a radio-frequency switch that is more than 50 times more energy efficient than what is used today.

With funding from the Army Research Office, an element of the U.S. Army Combat Capabilities Development Command's Army Research Laboratory, researchers at The University of Texas at Austin and the University of Lille in France, have built a new component that will more efficiently allow access to the highest 5G frequencies, in a way that increases devices' battery life and speeds up how quickly users can do things like stream HD media.

Smartphones are loaded with switches that perform a number of duties. One major task is jumping back and forth between different networks and spectrum frequencies: 4G, WiFi, LTE, Bluetooth, etc. The current radio-frequency switches that perform this task are always running, consuming precious processing power and battery life.

"It has become clear that the existing switches consume significant amounts of power, and that power consumed is useless power," said Dr. Deji Akinwande, a professor in the Cockrell School of Engineering's Department of Electrical and Computer Engineering who led the research. "The switch we have developed can transmit an HDTV stream at a 100GHz frequency, and that is an achievement in broadband switch technology."

The new switches stay off, saving battery life for other processes, unless they are actively helping a device jump between networks. They have also shown the ability to transmit data well above the baseline for 5G-level speeds.

Prior researchers have found success on the low end of the 5G spectrum - where speeds are slower but data can travel longer distances. This is the first switch that can function across the spectrum from the low-end gigahertz frequencies to high-end terahertz frequencies that could someday be key to the development of 6G.

The team's switches use the nanomaterial hexagonal boron nitride, a rapidly emerging nanomaterial from the same family as graphene. The structure of the switch involves a single layer of boron and nitrogen atoms in a honeycomb pattern sandwiched between a pair of gold electrodes. Hexagonal boron nitride is the thinnest known insulator with a thickness of 0.33 nanometers.

The impact of these switches extends beyond smartphones. Satellite systems, smart radios, reconfigurable communications, and Internet of Things, are all examples of potential uses for the switches. In addition, these switches can be realized on flexible substrates making them suitable for Soldier wearable radios and communication systems that can benefit from the improved energy efficiency for longer battery life with faster data speeds as well as other defense technologies.

"This will be very useful for radio and radar technology," Akinwande said.

This research spun out of a previous project that created the thinnest memory device, also using hBN. Akinwande said sponsors encouraged the researchers to find other uses for the material, and that led them to pivot to RF switches.