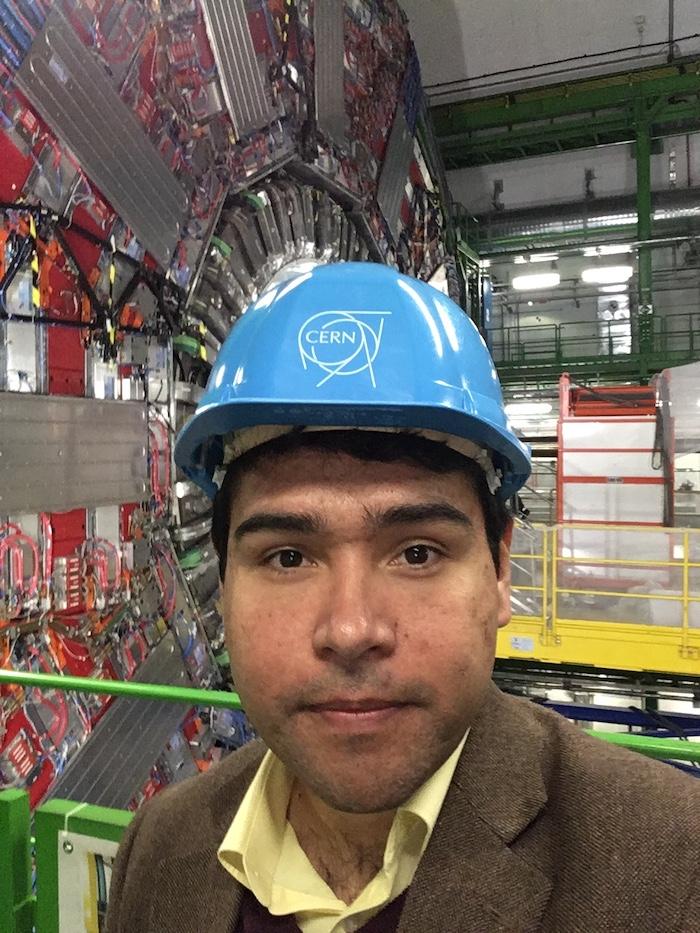 IMAGE: Daniel Tapia Takaki of the University of Kansas at work at the Large Hadron Collider's Compact Muon Solenoid.

LAWRENCE -- New findings from University of Kansas experimental nuclear physicists Daniel Tapia Takaki and Aleksandr (Sasha) Bylinkin were just published in the European Physical Journal C. The paper centers on work at the Compact Muon Solenoid, an experiment at the Large Hadron Collider, to better understand the behavior of gluons.

Gluons are elementary particles that are responsible for "gluing" together quarks and anti-quarks to form protons and neutrons -- so, gluons play a role in about 98% of all the visible matter in the universe.

Previous experiments at the now-decommissioned HERA electron-proton collider found when protons are accelerated close to light-speed, the density of gluons inside them increases very rapidly.

"In these cases, gluons split into pairs of gluons with lower energies, and such gluons split themselves subsequently, and so forth," said Tapia Takaki, KU associate professor of physics & astronomy. "At some point, the splitting of gluons inside the proton reaches a limit at which the multiplication of gluons ceases to increase. Such a state is known as the 'color glass condensate,' a hypothesized phase of matter that is thought to exist in very high-energy protons and as well as in heavy nuclei."

The KU researcher said his team's more recent experimental results at the Relativistic Heavy Ion Collider and LHC seemed to confirm the existence of such a gluon-dominated state. The exact conditions and the precise energy needed to observe "gluon saturation" in the proton or in heavy nuclei are not yet known, he said.

"The CMS experimental results are very exciting, giving new information about the gluon dynamics in the proton," said Victor Goncalves, professor of physics at Federal University of Pelotas in Brazil, who was working at KU under a Brazil-U.S. Professorship given jointly by the Sociedade Brasileira de Física and the American Physical Society. "The data tell us what the energy and dipole sizes are needed to get deeper into the gluonic-dominated regime where nonlinear QCD effects become dominant."

Although experiments at the LHC don't directly study interaction of the proton with elementary particles such as those of the late HERA collider, it's possible to use an alternative method to study gluon saturation. When accelerated protons (or ions) miss each other, photon interactions occur with the proton (or the ion). These near misses are called ultra-peripheral collisions (UPCs) as the photon interactions mostly occur when the colliding particles are significantly separated from each other.

"The idea that the electric charge of the proton or ions, when accelerated at ultra-relativistic velocities, will provide a source of quasi-real photons is not new," Tapia Takaki said. "It was first discussed by Enrico Fermi in the late 1920s. But it's only since the 2000s at the RHIC collider and more recently at the LHC experiments where this method has been fully exploited."

Tapia Takaki's group has played a significant role in the study of ultra-peripheral collisions of ions and protons at two instruments at the Large Hadron Collider, first at the ALICE Collaboration and more recently with the CMS detector.

"We have now a plethora of interesting results on ultra-peripheral heavy-ion collisions at the CERN's Large Hadron Collider," said Bylinkin, an associate researcher in the group. "Most of the results have been focused on integrated cross-sections of vector mesons and more recently on measurements using jets and studying light-by-light scattering. For the study of vector meson production, we are now doing systematic measurements, not only exploratory ones. We are particularly interested in the energy dependence study of the momentum transfer in vector meson production since here we have the unique opportunity to pin down the onset of gluon saturation."

The researchers said the work is significant because it's the first establishment of four measured points in terms of the energy of the photon-proton interaction and as a function of the momentum transfer.

"Previous experiments at HERA only had one single point in energy," Tapia Takaki said. "For our recent result, the lowest point in energy is about 35 GeV and the highest one is about 180 GeV. This does not sound like a very high energy point, considering that for recent J/psi and Upsilon measurements from UPCs at the LHC we have studied processes up to the 1000s GeV. The key point here is that although the energy is much lower in our Rho0 studies, the dipole size is very large."

According to team members, many questions remain unanswered in their line of research to better understand the makeup of protons and neutrons.

"We know that at the HERA collider there were already hints for nonlinear QCD effects, but there are many theoretical questions that have not been answered such as the onset of gluon saturation, and there are at least two main saturation models that we don't know yet which one is the closest to what nature says the proton is," said Goncalves. "We've used the latest results from the CMS collaboration and compared them to both the linear and nonlinear QCD-inspired models. We observed, for the first time, that the CMS data show a clear deviation from the linear QCD model at their highest energy point."