This news release is available in German.

Thanks to optical signals, mails and data can be transmitted rapidly around the globe. But also exchange of digital information between electronic chips may be accelerated and energy efficiency might be increased by using optical signals. However, this would require simple methods to switch from electrical to optical signals. In the Nature Photonics magazine, researchers now present a device of 29 µm in length, which converts signals at a rate of about 40 gigabits per second. It is the most compact high-speed phase modulator in the world. DOI: 10.1038/NPHOTON.2014.9.

"Conversion of electrical into optical signals happens closer to the processor," Juerg Leuthold says. He coordinated the research project at the Karlsruhe Institute of Technology and has meanwhile moved to the ETH Zurich. "As a result, speed gains are achieved and conduction losses can be prevented. This might reduce energy consumption of the growing information technology."

The electro-optical converter consists of two parallel gold electrodes of about 29 µm in length, which is one third of the diameter of a human hair. The electrodes are separated by a gap of about one tenth of a micrometer in width. The voltage applied to the electrodes is synchronized with the digital data. The gap is filled with an electro-optical polymer, whose refraction index changes as a function of the applied voltage. "A continuous beam of light from the silicon waveguide excites electromagnetic surface waves, so-called surface plasmons (SP), in the gap," Argishti Melikyan, KIT, first author of the publication, explains. "As a result of the voltage applied to the polymer, the phase of the SP is modulated. At the end of the device, the modulated SP enter the exit silicon waveguide in the form of a modulated beam of light. In this way, the data bits are encoded in the phase of the light." 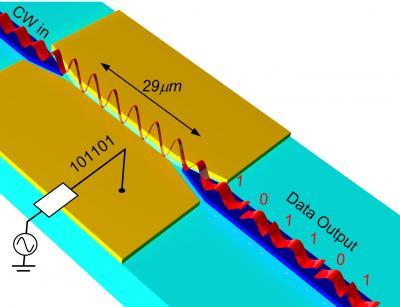 Due to the voltage applied, a beam of light (top left) is modulated by the digital bits (bottom right) of the converter (yellow). An electrical signal is converted into an optical signal.

Their recent results revealed that the electro-optic modulator reliably converts data flows of about 40 gigabits per second. It uses the infrared light of 1480 – 1600 nanometers in wavelength usually encountered in the broadband glass fiber network. Even temperatures of up to 85°C do not cause any operation failures. The presented device is the most compact high-speed phase modulator in the world. It can be produced by well-established CMOS fabrication processes. Integration into current chip architectures is hence possible. "The device combines many advantages of other systems, such as a high modulation speed, compact design, and energy efficiency. In the future, plasmonic devices might be used for signal processing in the terahertz range," says Christian Koos, spokesperson of KIT's Helmholtz International Research School of Teratronics (HIRST), which focuses on merging photonic and electronic techniques for high-speed signal processing. "Hundreds of plasmonic modulators might fit on a chip and data rates in the range of terabits per second might be reached."

Presently, information and communication systems consume about 10 percent of the electricity in Germany. This includes computers and smartphones of individual users as well as servers at large computing centers. As data traffic grows exponentially, new approaches are required to increasing the capacity of such systems and reducing their energy consumption at the same time. Plasmonic components might be of decisive importance in this respect.

The present paper is part of the EU project NAVOLCHI, Nano Scale Disruptive Silicon-Plasmonic Platform for Chip-to-Chip Interconnection. This project is aimed at using the interaction of light and electrons in metal surfaces for the development of novel components for data transmission between chips. "Conventional electric chip-to-chip data transmission reaches its limits," says the present project coordinator Manfred Kohl, KIT. "NAVOLCHI is about to overcome those limits using optical technology." It is funded under the 7th Research Framework Programme of the EU and has a budget of EUR 3.4 million.