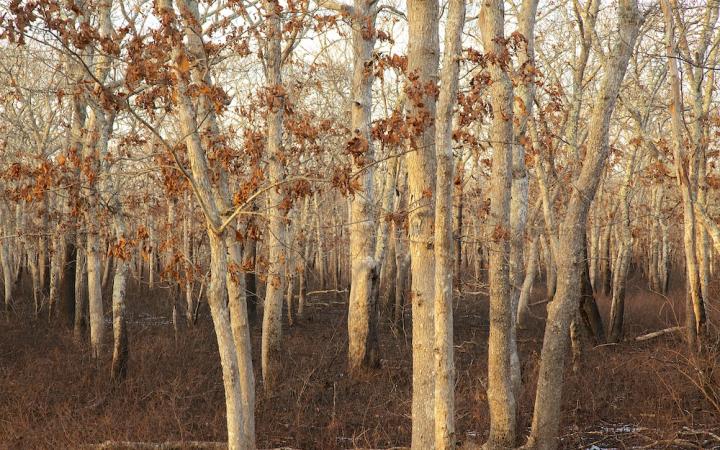 IMAGE: The long-held belief that native people used fire to create a diverse landscape of woodlands, grasslands, heathlands, and shrublands in New England has led to a widespread use of prescribed...

BINGHAMTON, N.Y. - Contrary to long-held beliefs, humans did not make major changes to the landscape prior to European colonization, according to new research conducted in New England featuring faculty at Binghamton University, State University of New York. These new insights into the past could help to inform how landscapes are managed in the future.

A theory that Native Americans actively managed landscapes, using fire to clear forests, has been growing in popularity in recent decades. Binghamton archaeologist Elizabeth Chilton and fellow researchers at Emerson College, Harvard University, University of Wyoming and The Public Archeology Laboratory, a New England cultural resource management firm, sought to explore the following key question: Over the past 14,000 years (since the last glaciation) were humans the major drivers of environmental change in southern New England or were they responding to changes in the climate?

"The paleo-climate, paleo-ecology and archaeological records suggest that native peoples were not modifying their immediate environments to a great degree," said Chilton. "And they certainly were not doing so with large-scale fire or clear-cutting of trees. The widespread and intensive deforestation and agriculture brought by Europeans in the 17th century was in clear contrast to what had come before. Previous conservation practices had been based on a presumption that Native Americans manipulated their environments using fire, and this research does not support that interpretation."

The team examined data from multiple sources over the past 14,000 years: pollen records, fire history (from charcoal in lake cores), hydrology and archaeology and combined these data using GIS to look for correlations in changes in the data sets over time. This marked the first time that archaeologists and ecologists worked together to analyze New England land use and climate history on a regional scale and over the entirety of pre-colonial Native American history.

"Much to my surprise, we found that, even though we know that Native Americans were in New England for at least 14,000 years with, at certain times in history, fairly large population densities, the ecological signal was essentially invisible," said Chilton. "If one did not know there had been humans on the landscape, it would be almost impossible to detect them on a regional scale. After the arrival of Europeans, large-scale cutting and burning of forests is very clear in the ecological record."

According to the researchers, this research provides important lessons for sustainability and contemporary conservation practice.

"Today, New England's species and habitat biodiversity is globally unique, and this research transforms our thinking and rationale for the best ways to maintain it. It also points to the importance of historical research to help us interpret modern landscapes and conserve them effectively into the future," said lead author Wyatt Oswald from Emerson College.

"Ancient native people thrived under changing forest conditions not by intensively managing them but by adapting to them and the changing environment," added Chilton.

This research was primarily concentrated in coastal New England. The researchers also have data from the interior of New England and are interested in comparing the data sets both within the region and with other regions with comparable data.