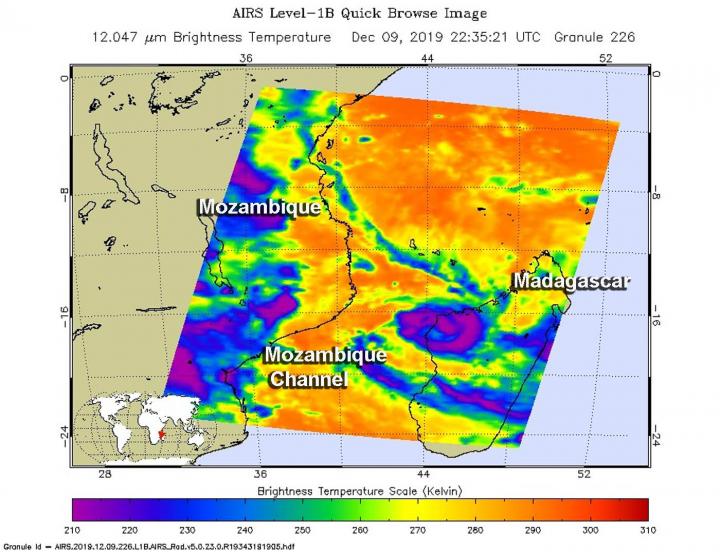 Cold cloud top temperatures can tell forecasters if a tropical cyclone has the potential to generate heavy rainfall, and that is exactly what NASA's Aqua satellite found when it observed the temperatures in Tropical Cyclone Belna over northwestern Madagascar.

One of the ways NASA researches tropical cyclones is using infrared data that provides temperature information. The AIRS instrument aboard NASA's Aqua satellite captured a look at those temperatures in Belna and gave insight into the storm's strength.

Cloud top temperatures provide information to forecasters about where the strongest storms are located within a tropical cyclone. Tropical cyclones do not always have uniform strength, and some sides have stronger sides than others. The stronger the storms, the higher they extend into the troposphere, and the colder the cloud temperatures are.

On Dec. 9 at 5:35 p.m. EST (2235 UTC) NASA's Aqua satellite analyzed the storm using the Atmospheric Infrared Sounder or AIRS instrument. AIRS found coldest cloud top temperatures as cold as or colder than minus 63 degrees Fahrenheit (minus 53 degrees Celsius) around the center and in a band of thunderstorms east of center over northwestern Madagascar. NASA research has shown that cloud top temperatures that cold indicate strong storms that have the capability to create heavy rain.

ReliefWeb reported that Belna made landfall in Soalala district in the west of Madagascar during the afternoon on Dec. 9. The rainfall that was evident in the AIRS infrared imagery occurred upon landfall, coupled with strong winds.

On Dec. 10 at 4 a.m. EST (0900 UTC), forecasters at the Joint Typhoon Warning Center (JTWC) noted that Belna had weakened to a tropical storm and had maximum sustained winds near 60 knots (69 mph/111 kph). Belna was moving to the south.

Belna was located near latitude 18.3 degrees south and longitude 44.8 degrees east. It was over land in west-central Madagascar and about 349 nautical miles northeast of Europa Island. Europa Island is a tropical atoll in the Mozambique Channel. It is located about one-third of the way between southern Madagascar and Mozambique.

The JTWC forecast calls for Belna to move south-southeast across Madagascar. The storm will slowly weaken and is expected to dissipate in south central Madagascar by Dec. 12.

Tropical cyclones and hurricanes are the most powerful weather events on Earth. NASA's expertise in space and scientific exploration contributes to essential services provided to the American people by other federal agencies, such as hurricane weather forecasting.

The AIRS instrument is one of six instruments flying on board NASA's Aqua satellite, launched on May 4, 2002.