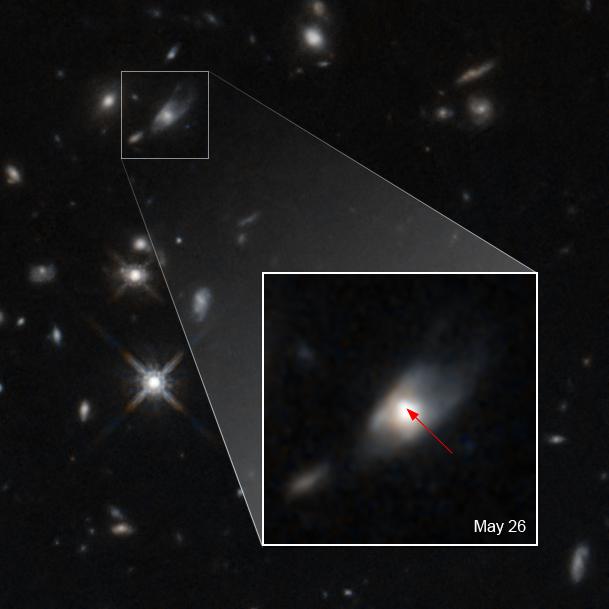 IMAGE: This image shows the glow from a kilonova caused by the merger of two neutron stars. The kilonova, whose peak brightness reaches up to 10,000 times that of a classical...

Long ago and far across the universe, an enormous burst of gamma rays unleashed more energy in a half-second than the Sun will produce over its entire 10-billion-year lifetime. In May of 2020, light from the flash finally reached Earth and was first detected by NASA's Neil Gehrels Swift Observatory. Scientists quickly enlisted other telescopes -- including NASA's Hubble Space Telescope, the Very Large Array radio observatory, the W. M. Keck Observatory, and the Las Cumbres Observatory Global Telescope network -- to study the explosion's aftermath and the host galaxy. It was Hubble that provided the surprise.

Based on X-ray and radio observations from the other observatories, astronomers were baffled by what they saw with Hubble: the near-infrared emission was 10 times brighter than predicted. These results challenge conventional theories of what happens in the aftermath of a short gamma-ray burst. One possibility is that the observations might point to the birth of a massive, highly magnetized neutron star called a magnetar.

"These observations do not fit traditional explanations for short gamma-ray bursts," said study leader Wen-fai Fong of Northwestern University in Evanston, Illinois. "Given what we know about the radio and X-rays from this blast, it just doesn't match up. The near-infrared emission that we're finding with Hubble is way too bright. In terms of trying to fit the puzzle pieces of this gamma-ray burst together, one puzzle piece is not fitting correctly."

Without Hubble, the gamma-ray burst would have appeared like many others, and Fong and her team would not have known about the bizarre infrared behavior. "It's amazing to me that after 10 years of studying the same type of phenomenon, we can discover unprecedented behavior like this," said Fong. "It just reveals the diversity of explosions that the universe is capable of producing, which is very exciting."

The intense flashes of gamma rays from these bursts appear to come from jets of material that are moving extremely close to the speed of light. The jets do not contain a lot of mass -- maybe a millionth of the mass of the Sun -- but because they're moving so fast, they release a tremendous amount of energy across all wavelengths of light. This particular gamma-ray burst was one of the rare instances in which scientists were able to detect light across the entire electromagnetic spectrum.

"As the data were coming in, we were forming a picture of the mechanism that was producing the light we were seeing," said the study's co-investigator, Tanmoy Laskar of the University of Bath in the United Kingdom. "As we got the Hubble observations, we had to completely change our thought process, because the information that Hubble added made us realize that we had to discard our conventional thinking, and that there was a new phenomenon going on. Then we had to figure out what that meant for the physics behind these extremely energetic explosions."

Gamma-ray bursts -- the most energetic, explosive events known -- live fast and die hard. They are split into two classes based on the duration of their gamma rays.

If the gamma-ray emission is greater than two seconds, it's called a long gamma-ray burst. This event is known to result directly from the core collapse of a massive star. Scientists expect a supernova to accompany this longer type of burst.

Neutron star mergers are very rare but are extremely important because scientists think that they are one of the main sources of heavy elements in the universe, such as gold and uranium.

Accompanying a short gamma-ray burst, scientists expect to see a "kilonova" whose peak brightness typically reaches 1,000 times that of a classical nova. Kilonovae are an optical and infrared glow from the radioactive decay of heavy elements and are unique to the merger of two neutron stars, or the merger of a neutron star with a small black hole.

Fong and her team have discussed several possibilities to explain the unusual brightness that Hubble saw. While most short gamma-ray bursts probably result in a black hole, the two neutron stars that merged in this case may have combined to form a magnetar, a supermassive neutron star with a very powerful magnetic field.

"You basically have these magnetic field lines that are anchored to the star that are whipping around at about a thousand times a second, and this produces a magnetized wind," explained Laskar. "These spinning field lines extract the rotational energy of the neutron star formed in the merger, and deposit that energy into the ejecta from the blast, causing the material to glow even brighter."

If the extra brightness came from a magnetar that deposited energy into the kilonova material, then within a few years, the team expects the ejecta from the burst to produce light that shows up at radio wavelengths. Follow-up radio observations may ultimately prove that this was a magnetar, and this may explain the origin of such objects.

"With its amazing sensitivity at near-infrared wavelengths, Hubble really sealed the deal with this burst," explained Fong. "Amazingly, Hubble was able to take an image only three days after the burst. Through a series of later images, Hubble showed that a source faded in the aftermath of the explosion. This is as opposed to being a static source that remains unchanged. With these observations, we knew we had not only nabbed the source, but we had also discovered something extremely bright and very unusual. Hubble's angular resolution was also key in pinpointing the position of the burst and precisely measuring the light coming from the merger."

NASA's upcoming James Webb Space Telescope is particularly well-suited for this type of observation. "Webb will completely revolutionize the study of similar events," said Edo Berger of Harvard University in Cambridge, Massachusetts, and principal investigator of the Hubble program. "With its incredible infrared sensitivity, it will not only detect such emission at even larger distances, but it will also provide detailed spectroscopic information that will resolve the nature of the infrared emission."