Three days of NASA infrared satellite imagery provides a clear picture to forecasters of the effect wind shear has had on former Cyclone Cherono. Wind shear increased near Cyclone Cherono this weekend and weakened it down to a remnant low pressure area in the Southern Indian Ocean. Today, March 21, Cherono's remnants are moving away from Mauritius and still causing ocean swells.

AIRS infrared imagery on March 19 at 09:35 UTC showed a concentrated center of circulation with a band of thunderstorms stretching from southwest to northwest outside the center of Cherono's circulation. At that time Cherono was still a tropical storm. On March 20 at 21:11 UTC, AIRS imagery revealed that those bands of thunderstorms around Cherono had disappeared as a result of the increased wind shear. On Sunday, March 20, the strongest convection (rapidly rising air that forms the thunderstorms that power a tropical cyclone) was located to the north of the center of circulation.

By March 21 at 09:17 UTC, NASA AIRS infrared imagery showed that Cherono had become asymmetric from wind shear. When a tropical cyclone becomes asymmetric it weakens. 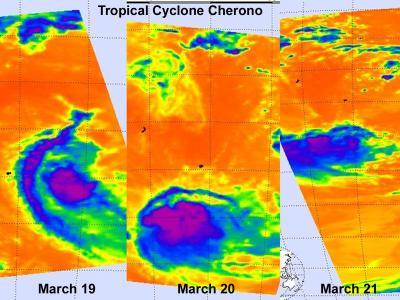 These three days of AIRS infrared imagery show how wind shear took its toll on Cyclone Cherono and weakened it to a remnant low pressure area. On March 19 (left) it was a tropical storm with a band of thunderstorms around west of center. On March 20 the banding was gone and strong convection (purple) was limited to north of the center of circulation. By March 21 Cherono had become asymmetric from wind shear and weakened to a remnant low.

The Mauritius Meteorological Service warns that as the remnant low pressure area formerly known as Cyclone Cherono continues to move away today, March 21. As a result, rough surf and heavy ocean swells can be expected today and residents are being warned not to go in the ocean, especially beyond reef areas.

The last warning on Cherono from the Joint Typhoon Warning Center came on Saturday, March 19, when Cherono was still a Tropical Storm with maximum sustained winds near 40 mph (35 knots/ 64 kmh). at that time it was located about 595 miles east of La Reunion Island near 19.7 South and 65.0 East, and was moving west-southwest near 9 mph (8 knots/ 14 kmh).

Over this past weekend, vertical wind shear increased battering the structure of Cyclone Cherono and weakening the circulation. Now the remnant low continues to move away from Mauritius and is expected to dissipate over the next day or two.