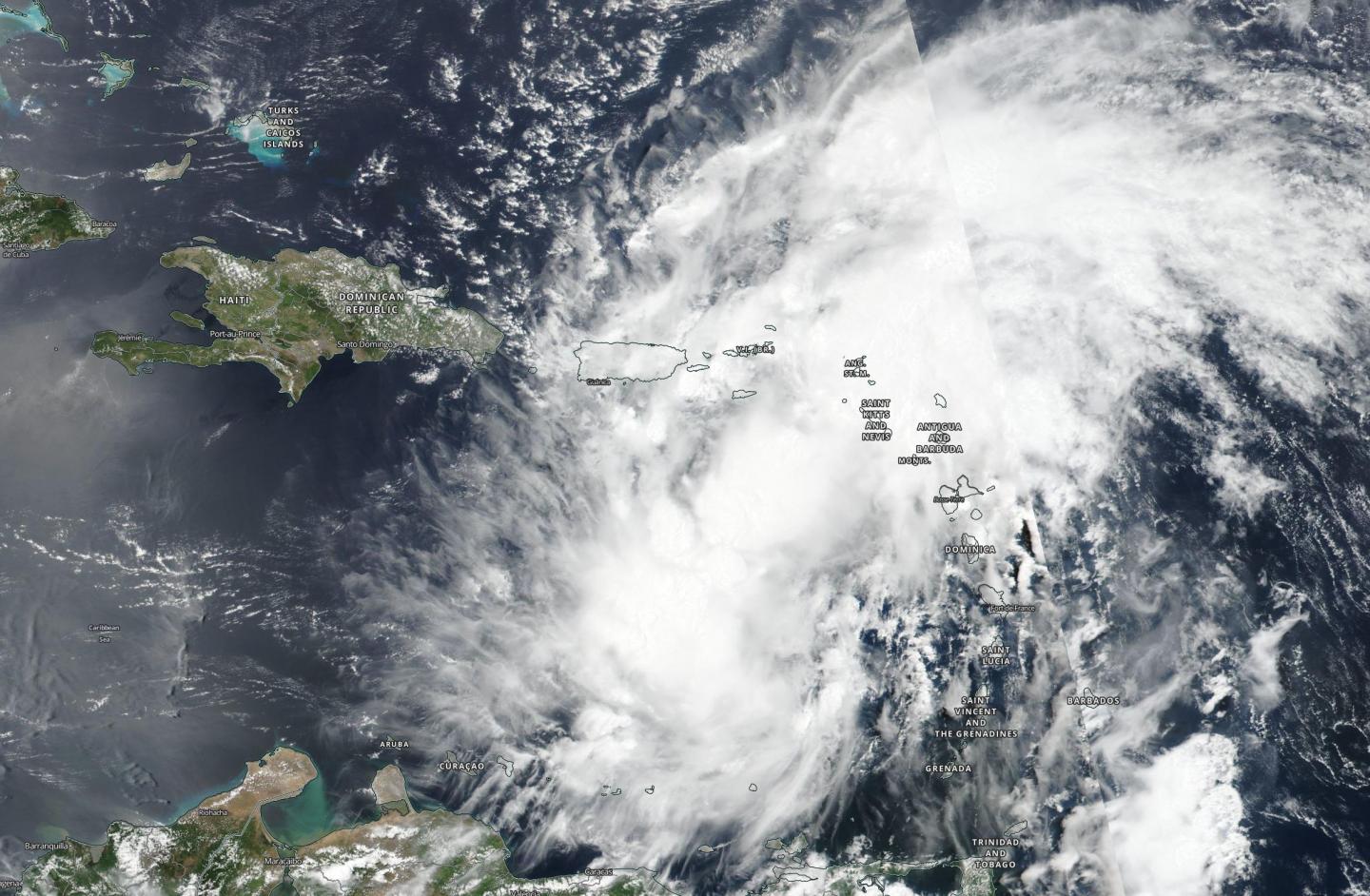 The Visible Infrared Imaging Radiometer Suite (VIIRS) instrument aboard Suomi NPP provided a visible image of Potential Tropical Cyclone 9 on July 28. The storm developed into Tropical Storm Isaias on July 29. The imagery showed the broader circulation of the disturbance had become slightly better defined but at the time of the July 29 image, Air Force Reserve reconnaissance aircraft was still unable to find a well-defined circulation.

Later in the day, by 5 p.m. EDT, deep convection continued to increase and a band of thunderstorms developed over the southwestern portion of the broad circulation. By 11 p.m., the storm had developed into a tropical storm. The National Hurricane center noted, "Observations from recent scatterometer passes over the system show that it now has a sufficiently well-defined center to be designated as a tropical cyclone."

Many Warnings and Watches in Effect

The National Hurricane Center (NHC) posted many watches and warnings as Isaias moved through the Caribbean Sea on July 30.

A Tropical Storm Warning is in effect for Puerto Rico, Vieques, Culebra; the U.S. Virgin Islands; the Dominican Republic entire southern and northern coastlines; the north coast of Haiti from Le Mole St. Nicholas eastward to the northern border with the Dominican Republic; Turks and Caicos Islands; the southeastern Bahamas including the Acklins, Crooked Island, Long Cay, the Inaguas, Mayaguana, the Ragged Islands; the Central Bahamas, including Cat Island, the Exumas, Long Island, Rum Cay, and San Salvador.

The AIRS instrument aboard NASA's Aqua satellite captured a look at cloud top temperatures in Isaias and gave insight into the size of the large storm and its rainfall potential.

Cloud top temperatures provide information to forecasters about where the strongest storms are located within a tropical cyclone. Tropical cyclones do not always have uniform strength, and some sides have stronger sides than others. The stronger the storms, the higher they extend into the troposphere, and the colder the cloud temperatures. NASA provides that data to forecasters at NOAA's National Hurricane Center or NHC so they can incorporate in their forecasting.

On July 30 at 2:35 a.m. EDT (0635 UTC) NASA's Aqua satellite analyzed the storm using the Atmospheric Infrared Sounder or AIRS instrument. AIRS found coldest cloud top temperatures as cold as or colder than minus 63 degrees Fahrenheit (minus 53 degrees Celsius). NASA research has shown that cloud top temperatures that cold indicate strong storms that have the capability to create heavy rain.

NASA's AIRS data, combined with other data is used by NHC in their forecasts. NHC said Isaias is expected to produce the following rain accumulations:

In Puerto Rico, the Dominican Republic and northern Haiti: 4 to 8 inches, with isolated maximum totals of 10 inches.

In the Bahamas, Turks and Caicos: 4 to 8 inches.

In Cuba: 1 to 2 inches, with isolated maximum totals of 4 inches.

These rainfall amounts will lead to life-threatening flash flooding and mudslides, as well as river flooding. Urban and small stream flooding is expected for the U.S. Virgin Islands, eastern and southwestern Puerto Rico, and Hispaniola. Heavy rains associated with Isaias may begin to affect South Florida Saturday morning. This rain could result in isolated flash and urban flooding, especially in low-lying and poorly drained areas.

By 11 a.m. EDT on July 30, Isaias had moved northwest and was bringing heavy rain and gusty winds to Puerto Rico. The rainfall was producing life-threatening flash flooding. Heavy rains and gusty winds were also spreading over the Dominican Republic.

The center of Tropical Storm Isaias was located near latitude 18.1 degrees north and longitude 68.9 degrees west. That is 50 miles (75 km) southwest of Punta Cana, Dominican Republic. Isaias was moving toward the northwest near 20 mph (31 kph), and a west-northwestward to northwestward motion with some decrease in forward speed is expected over the next couple of days.

Maximum sustained winds are near 60 mph (95 kph) with higher gusts. Some slight weakening is possible as Isaias moves over Hispaniola today. Re-strengthening is forecast on Friday into Friday night. Tropical-storm-force winds extend outward up to 310 miles (500 km) primarily to the north of the center. Tropical-storm-force winds are occurring along the southern coast of Puerto Rico. The estimated minimum central pressure is 1003 millibars.

On the forecast track, the center of Isaias will move over Hispaniola today, July 30, and move near the Southeastern Bahamas by tonight or early Friday. Isaias is forecast to be near the Central Bahamas Friday night and approach the Northwest Bahamas or southern Florida Friday night and Saturday, August 1.