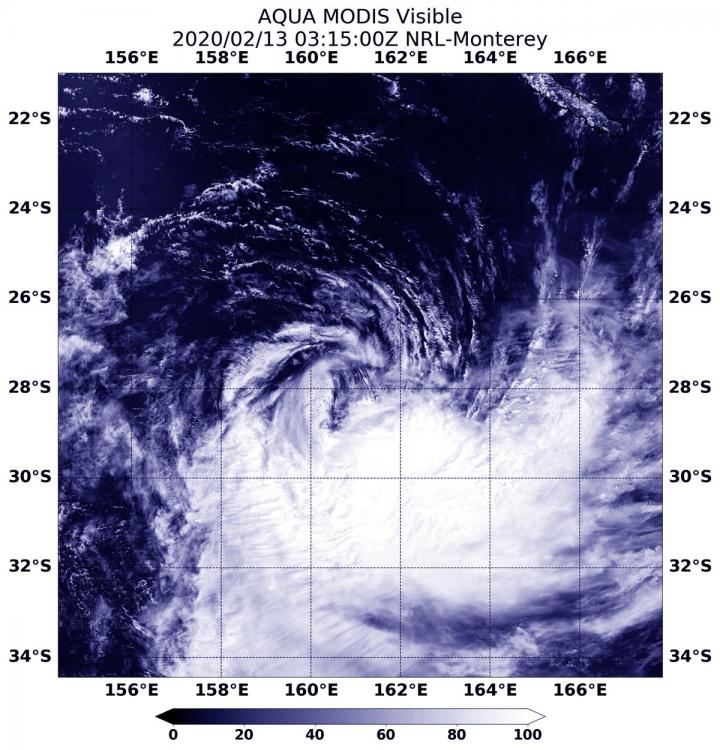 On Feb. 13 at 0315 UTC (Feb. 12 at 10:15 p.m. EST), the Moderate Resolution Imaging Spectroradiometer or MODIS instrument that flies aboard NASA's Aqua satellite provided a visible image of Tropical Cyclone Uesi being adversely affected by vertical wind shear. The image showed that the bulk of clouds were being pushed to the southeast of the center of circulation.

In general, wind shear is a measure of how the speed and direction of winds change with altitude. Tropical cyclones are like rotating cylinders of winds. Each level needs to be stacked on top each other vertically in order for the storm to maintain strength or intensify. Wind shear occurs when winds at different levels of the atmosphere push against the rotating cylinder of winds, weakening the rotation by pushing it apart at different levels. Northwesterly wind shear was affecting Uesi and pushing the bulk of clouds to the southeast of the center.

At 0300 UTC on Feb. 13 (10 p.m. EST on Feb. 12), the Joint Typhoon Warning Center (JTWC) issued the final bulletin on Tropical cyclone Uesi. At that time, Uesi was located near latitude 27.7 degrees south and longitude 161.1 degrees east, about 332 nautical miles southwest of Noumea, New Caledonia. Uesi had maximum sustained winds near 55 knots (63 mph/102 kph). The storm was moving to the south-southwest.

On Feb. 13 at 11:59 pm AEDT (Australia Eastern Time) or 7:59 a.m. EST, the Australian Bureau of Meteorology (ABM) noted "Ex-tropical cyclone Uesi is moving rapidly southwards and will produce destructive wind gusts at Lord Howe Island over the next few hours."  ABM said that the system is expected to maintain an intensity equivalent to a category 2 tropical cyclone as it passes the island. For updates from ABM, visit: http://www.bom.gov.au/.

NASA's Aqua satellite is one in a fleet of NASA satellites that provide data for hurricane research.