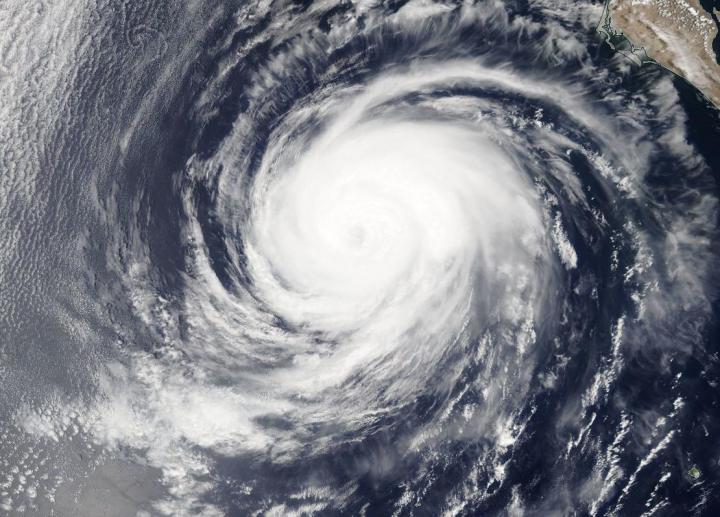 IMAGE: NASA's Aqua satellite provided a visible image to forecasters of Hurricane Elida on Aug. 11 that showed the eye had become covered by high clouds and the storm appeared more...

NASA's Aqua satellite obtained visible imagery of Hurricane Elida in the Eastern Pacific as it continued to weaken. Imagery revealed that Elida's eye had become covered as the storm embarks on a weakening trend over cooler waters.

The Moderate Resolution Imaging Spectroradiometer or MODIS instrument that flies aboard NASA's Aqua satellite captured a visible image of Hurricane Elida on Aug. 11 at 4:30 p.m. EDT and the eye had become obscured by high clouds. The image also revealed that the storm looked more elongated, another sign a storm is weakening. Satellite imagery was created using NASA's Worldview product at NASA's Goddard Space Flight Center in Greenbelt, Md.

At 5 a.m. EDT (0900 UTC) on Aug. 12, the center of Hurricane Elida was located near latitude 23.0 degrees north and longitude 117.7 degrees west. That's about 495 miles (800 km) west of the southern tip of Baja California, Mexico. Elida is moving toward the west-northwest near 13 mph (20 kph). A turn to the northwest along with some decrease in forward speed is expected to occur tonight. Maximum sustained winds are near 75 mph (120 kph) with higher gusts. The estimated minimum central pressure is 988 millibars.

Satellite imagery on Aug. 12 show that Elida's remaining deep convection, located northeast of the center of circulation, continues to shrink in coverage and wane in intensity.

The National Hurricane Center (NHC) said, "Swells generated by Elida are expected to affect portions of the coast of west-central Mexico and the southern Baja California peninsula during the next day or two.  These swells are likely to cause life-threatening surf and rip current conditions."

NHC noted that Elida is expected to weaken quickly. "Rapid weakening is expected during the next day or so as Elida moves over colder water, and the cyclone is forecast to weaken to a tropical storm today and degenerate to a remnant low [pressure area] on Thursday."

About NASA's Worldview and Aqua Satellite

NASA's Earth Observing System Data and Information System (EOSDIS) Worldview application provides the capability to interactively browse over 700 global, full-resolution satellite imagery layers and then download the underlying data. Many of the available imagery layers are updated within three hours of observation, essentially showing the entire Earth as it looks "right now."

NASA's Aqua satellite is one in a fleet of NASA satellites that provide data for hurricane research.

Tropical cyclones/hurricanes are the most powerful weather events on Earth. NASA's expertise in space and scientific exploration contributes to essential services provided to the American people by other federal agencies, such as hurricane weather forecasting.