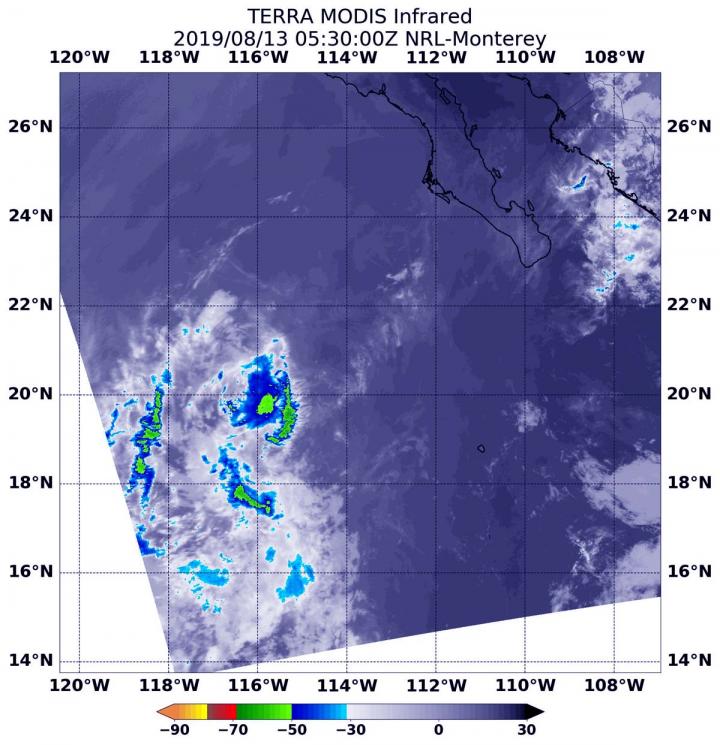 NASA's Terra satellite uses infrared light to analyze the strength of storms by providing temperature information about the system's clouds. The strongest thunderstorms that reach high into the atmosphere have the coldest cloud top temperatures.

MODIS found just a few scattered areas of cold clouds in thunderstorms in the depression. Those thunderstorms had cloud top temperatures as cold as minus 50 degrees Fahrenheit (minus 45.5 Celsius).

NOAA's National Hurricane Center (NHC) noted that Henriette was weakening quickly. At 5 a.m. EDT (0900 UTC), the center of Tropical Depression Henriette was located near latitude 21.1 degrees north and longitude 115.2 degrees west. That's about 360 miles (580 km) west-southwest of the southern tip of Baja California, Mexico. The depression is moving toward the west-northwest near 13 mph (20 km/h) and this general motion should continue through tonight.

Maximum sustained winds have decreased to near 30 mph (45 kph) with higher gusts.

NHC said, "Additional weakening is expected during the next 24 hours, and the depression is forecast to degenerate into a remnant low later today [Aug. 13, 2019]."