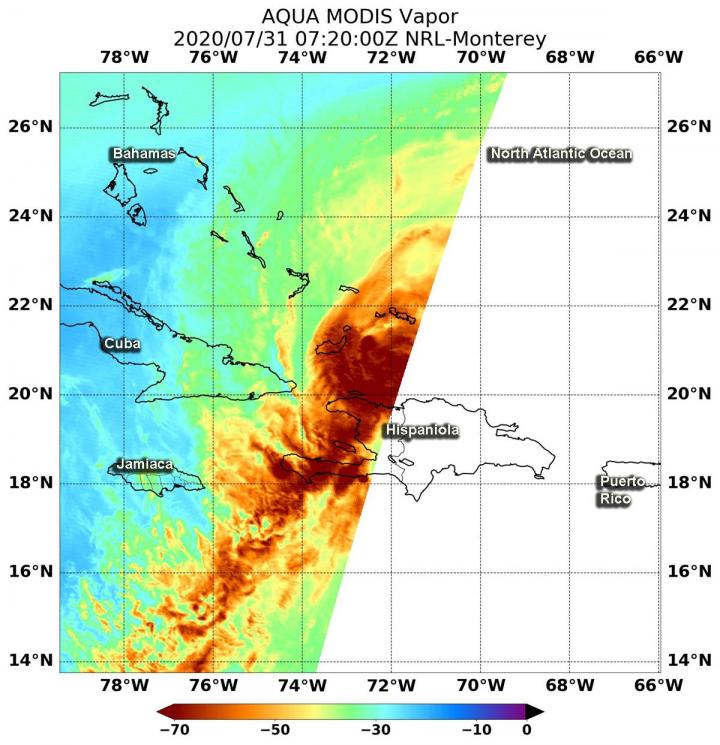 A Visible View of Isaias

NASA-NOAA's Suomi NPP satellite passed over the Atlantic Ocean during the afternoon on July 30, the Visible Infrared Imaging Radiometer Suite (VIIRS) instrument provided forecasters with a visible image of Isaias as it was intensifying. VIIRS revealed strong thunderstorms had circled the center of circulation. The image showed the center near the northeastern coast of the Dominican Republic and bands of thunderstorms from the eastern quadrant stretching over Puerto Rico. At the time of the image, Isaias had not yet reached Turks and Caicos. A thick band of thunderstorms from the center of circulation also stretched out in a southwesterly direction and over the Caribbean Sea.

Water vapor analysis of tropical cyclones tells forecasters how much potential a storm has to develop. Water vapor releases latent heat as it condenses into liquid. That liquid becomes clouds and thunderstorms that make up a tropical cyclone. Temperature is important when trying to understand how strong storms can be. The higher the cloud tops, the colder and stronger the storms.

NASA's Aqua satellite passed over Hurricane Isaias on July 31 at 3:20 a.m. EDT (0720 UTC), and the Moderate Resolution Imaging Spectroradiometer or MODIS instrument gathered water vapor content and temperature information. The MODIS image showed highest concentrations of water vapor and coldest cloud top temperatures were around the center of circulation and in a thick band of thunderstorms that extends southwest over western Hispaniola and into the Caribbean Sea. Those cloud top temperatures were as cold as or colder than minus 70 degrees Fahrenheit (minus 56.6 degrees Celsius) in those storms. Storms with cloud top temperatures that cold have the capability to produce heavy rainfall.

On July 31, NOAA's National Hurricane Center (NHC) issued a Hurricane Warning for the northwestern Bahamas including Andros Island, New Providence, Eleuthera, Abacos Islands, Berry Islands, Grand Bahamas Island, and Bimini. It is also in effect for the southeastern Bahamas including the Acklins, Crooked Island, Long Cay, the Inaguas, Mayaguana, and the Ragged Islands; and for the central Bahamas, including Cat Island, the Exumas, Long Island, Rum Cay, and San Salvador.

At 8 a.m. EDT (1200 UTC) on July 31, NHC reported the center of Hurricane Isaias was located by NOAA and Air Force Reserve Hurricane Hunter aircraft near latitude 21.3 north, longitude 73.9 west. That puts the center about 30 miles (50 km) northwest of Great Inagua Island, and 340 miles (545 km) southeast of Nassau. Reports from the reconnaissance aircraft indicate that the minimum central pressure is 990 millibars.

Isaias was moving toward the northwest near 17 mph (28 kph), and a generally northwestward motion with some decrease in forward speed is expected for the next couple of days followed by a turn toward the north-northwest. Maximum sustained winds are near 80 mph (130 kph) with higher gusts.  Some strengthening is possible today, and Isaias is expected to remain a hurricane for the next few days.

Interests elsewhere along the southeast coast of the United States should monitor the progress of this system. Additional watches or warnings may be required for a portion of the Florida peninsula later today.

Hurricanes/tropical cyclones are the most powerful weather events on Earth. NASA's expertise in space and scientific exploration contributes to essential services provided to the American people by other federal agencies, such as hurricane weather forecasting. NASA's Aqua satellite is one in a fleet of NASA satellites that provide data for hurricane research.

For more than five decades, NASA has used the vantage point of space to understand and explore our home planet, improve lives and safeguard our future. NASA brings together technology, science, and unique global Earth observations to provide societal benefits and strengthen our nation. Advancing knowledge of our home planet contributes directly to America's leadership in space and scientific exploration.