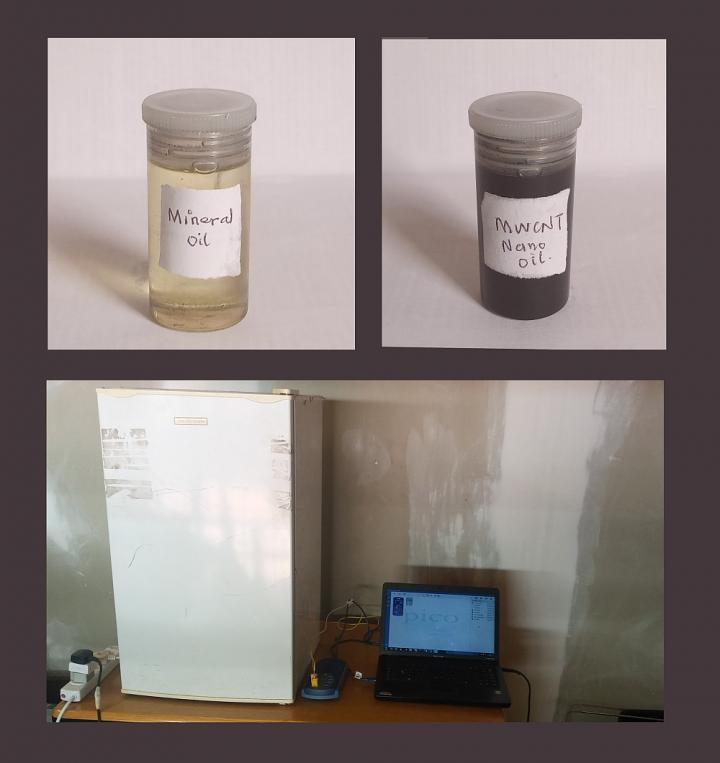 IMAGE: Nanoparticles can reduce the power consumption of cooling devices such as refrigerators, freezers and air-conditioning by substantial amounts. In a drop-in refrigerant replacement test, researchers from the University of Johannesburg...

Power consumption of a home refrigerator can be cut by 29% while improving cooling capacity. Researchers replaced widely-used, but environmentally unfriendly, R134a refrigerant with the more energy-efficient R600a. They dosed R600a with multi-walled carbon nanotube (MWCNT) nanoparticles. Drop-in refrigerant replacement in the field by trained technicians is possible, says an engineer from the University of Johannesburg.

This test of nanoparticle-dosed refrigerants is a first of its kind and recently published in Energy Reports, an open-access journal. The results can help make home refrigeration more accessible for low-income families.

R134a is one of the most widely-used refrigerants in domestic and industrial refrigerators. It is safe for many applications because it is not flammable. However, it has high global warming potential, contributing to climate change. It also causes fridges, freezers and air-conditioning equipment to consume a lot of electrical energy. The energy consumption contributes even more to climate change.

Meanwhile, a more energy-efficient refrigerant can result in much lower electricity bills. For vulnerable households, energy security can be improved as a result. Improved energy economy and demand-side management can also benefit planners at power utilities, as cooling accounts for about 40% of energy demand.

Nano eco-friendly refrigerants have been made with water and ethylene glycol. Previous studies showed reduced energy use in nano-refrigeration, where refrigerants were dosed with multi-walled carbon nanotube (MWCNT) nanoparticles. The nanoparticles also resulted in reduced friction and wear on appliance vapour compressors.

But previous research did not test the effects of MWCNT's on hydro-carbon refrigerants such as R600a.

In a recent study, researchers at the University of Johannesburg tested the drop-in replacement of environmentally-unfriendly refrigerant R134a, in a home refrigerator manufactured to work with 100g R134a.

They replaced R134a with the more energy-efficient refrigerant R600a, dosed with MWCNT nanoparticles.

Reduces electricity use by more than a quarter

The researchers removed the R134a refrigerant and its compressor oil from a household fridge. They used a new refrigerant, R600a, and dosed it with multi-walled carbon nanotubes (MWCNTs). Mineral oil was used as a lubricant. The new mix was fed into the fridge and performance tests were conducted.

They found that the R600a-MWCNT refrigerant resulted in much better performance and cooling capacity for the fridge.

"The fridge cooled faster and had a much lower evaporation temperature of -11 degrees Celsius after 150 minutes. This was lower than the -8 degrees Celsius for R134a. It also exceeded the ISO 8187 standard, which requires -3 degrees Celsius at 180 minutes," says Dr Daniel Madyira.

Dr Madyira is from the Department of Mechanical Engineering Science at the University of Johannesburg.

"Electricity usage decreased by 29% compared to using R134a. This is a significant energy efficiency gain for refrigerator users, especially for low income earners," he adds.

To gain these advantages, the choice of MWCNT nanoparticles is critical, he says.

The new refrigerant mix introduces a potential risk though. Unlike R134a, R600a is flammable. On the other hand, it is more energy efficient, and it has a low Global Warming potential. Some refrigerator manufacturers have already adopted production with R600a and these appliances are available in the market.

"To do a safe drop-in replacement, no more than 150g of R600a should be used in a domestic fridge," says Dr Madyira. "Before the replacement, the fridge used 100g of R134a gas. We replaced that with 50g to 70g of R600a, to stay within safety parameters."

An untrained person should not attempt this drop-in replacement, says Dr Madyira. Rather, a trained refrigeration technician or technologist should do it.

"Mineral oil is used as the compressor oil. This should be mixed with the recommended concentration. A magnetic stirrer and ultrasonicator are needed to agitate and homogenize the ingredients in the mixture. The mixture can then be introduced into the compressor. After that, R600a can be charged into the refrigerator compressor, while taking care to not use more than 150g of the gas," says Dr Madyira.

A woman's fridge is her castle

A far more energy-efficient refrigerant, such as the R600a-MWCNT mix, can save consumers a lot of money. Vulnerable households in hot climates in developing countries can benefit even more.

Low income earners in many countries are dependent on home fridges and freezers to safely store bulk food supplies. This greatly reduces the risk of wasting food due to spoilage, or food poisoning due to improperly stored food. These appliances are no longer a luxury but a necessity, says Dr Madyira.

Without fridges, people may be forced to buy food daily in small quantities and at much higher prices. Because daily buying may not be required anymore, travel time and costs for buying food can be much lower as well.

Refrigeration also makes it possible to safely store more diverse food supplies, such as fresh fruit and vegetables. Medicines that require cooling can be stored at home. This can make more balanced diets and nutrition, and better physical health, more accessible for a low-income household.

From a sustainability point of view, it can look preferable to run most home fridges and freezers from solar power.

However solar panels, backup batteries, and direct current (DC) fridges are still too expensive for most low-income families in areas served by power utilities.

Energy-efficient, alternating current (AC) fridges running on grid power may be more affordable for most. Further cutting power consumption with R600a-MWCNT refrigerant can bring down costs even more.

Refrigeration for all vs demand-side management

In South Africa where the study was conducted, the state-operated power utility faces huge challenges in meeting demand consistently. Long-lasting rolling blackouts, known as load-shedding, have been implemented as a demand-side power management measure.

Shaving off more than a quarter of the power consumption of fridges, freezers and air-conditioning units can free up national power supply for improved energy security.