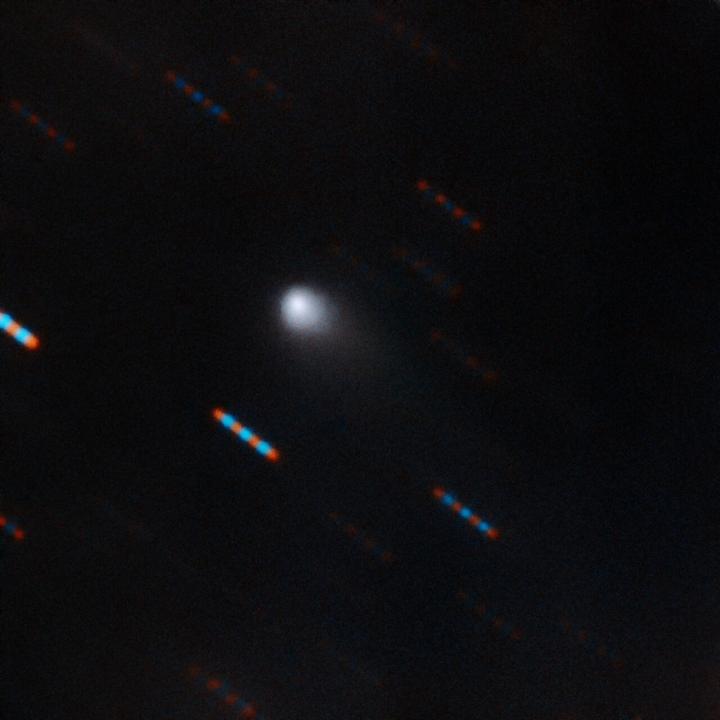 IMAGE: The first-ever comet from beyond our Solar System, as imaged by the Gemini Observatory. The image of the newly discovered object, named 2I/Borisov, was obtained on the night of...

On 30 August 2019 the amateur astronomer Gennady Borisov, from MARGO observatory, Crimea, discovered an object with a comet-like appearance. The object has a condensed coma, and more recently a short tail has been observed. Mr. Borisov made this discovery with a 0.65-metre telescope he built himself.

After a week of observations by amateur and professional astronomers all over the world, the IAU Minor Planet Center was able to compute a preliminary orbit, which suggested this object was interstellar -- only the second such object known to have passed through the Solar System.

The orbit is now sufficiently well known, and the object is unambiguously interstellar in origin; it has received its final designation as the second interstellar object, 2I. In this case, the IAU has decided to follow the tradition of naming cometary objects after their discoverers, so the object has been named 2I/Borisov.

Of the thousands of comets discovered so far, none has an orbit as hyperbolic as that of 2I/Borisov. This conclusion is independently supported by the NASA JPL Solar System Dynamics Group. Coming just two years after the discovery of the first interstellar object 1I/'Oumuamua, this new finding suggests that such objects may be sufficiently numerous to provide a new way of investigating processes in planetary systems beyond our own.

2I/Borisov will make its closest approach to the Sun (reach its perihelion) on 7 December 2019, when it will be 2 astronomical units (AU) from the Sun and also 2 AU from Earth. By December and January it is expected that it will be at its brightest in the southern sky. It will then begin its outbound journey, eventually leaving the Solar System forever.

Astronomers are eagerly observing this object, which will be continuously observable for many months, a period longer than that of its predecessor, 1I/'Oumuamua. Astronomers are optimistic about their chances of studying this rare guest in great detail.

Estimates of the sizes of comets are difficult because the small cometary nucleus is embedded in the coma, but, from the observed brightness, 2I/Borisov appears to be around a few kilometres in diameter. One of the largest telescopes in the world, the 10.4m Gran Telescopio Canarias in the Canary Islands, has already obtained a spectrum of 2I/Borisov and has found it to resemble those of typical cometary nuclei.

This new interstellar visitor raises intriguing questions: Why have interstellar objects not been discovered before? What is the expected rate of their appearance in the inner Solar System? How do such objects compare to similar bodies within the Solar System? Large telescopic surveys capable of scanning large fractions of the sky on a regular basis may help to answer these questions and more in the near future.