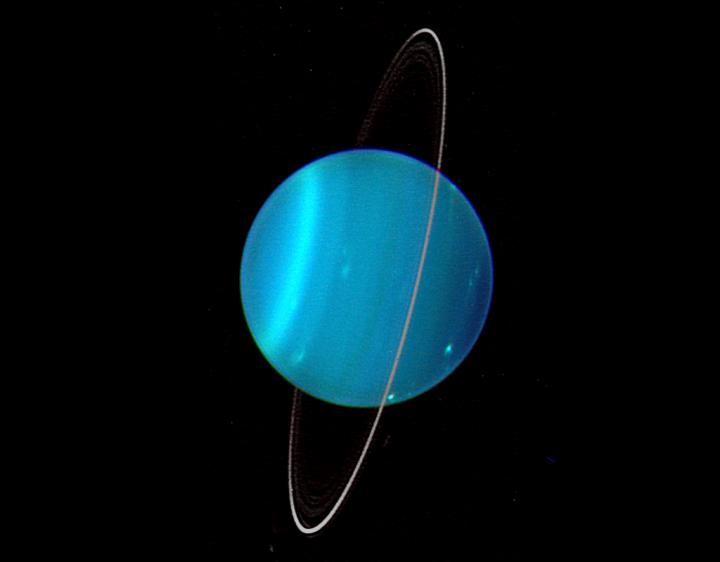 IMAGE: Uranus is uniquely tipped over among the planets in our Solar System. Uranus' moons and rings are also orientated this way, suggesting they formed during a cataclysmic impact which tipped...

Instead of thinking about the reality of stars spread in all directions and at various distances from the Earth, it is easier to understand by envisioning the celestial sphere. To picture what the celestial sphere is, look up at the night sky and imagine that all of the stars you see are painted on the inside of a sphere surrounding the Solar System. Stars then seem to rise and set as the Earth moves relative to this 'sphere'. As Uranus rotates and orbits the Sun, it keeps its poles aimed at fixed points with relation to this sphere, so it appears to roll around and wobble from an Earth observer's perspective. Uranus also has a ring system, like Saturn's, and a slew of 27 moons which orbit the planet around its equator, so they too are tipped over. How Uranus' unusual set of properties came to be has now been explained by a research team led by Professor Shigeru Ida from the Earth-Life Science Institute (ELSI) at Tokyo Institute of Technology. Their study suggests that early in the history of our Solar System, Uranus was struck by a small icy planet - roughly 1-3 times the mass of the Earth - which tipped the young planet over, and left behind its idiosyncratic moon and ring system as a 'smoking gun'.

The team came to this conclusion while they were constructing a novel computer simulation of moon formation around icy planets. Most of the planets in the Solar System have moons, and these display a menagerie of different sizes, orbits, compositions and other properties, which scientists believe can help explain how they formed. There is strong evidence Earth's own single moon formed when a rocky Mars-sized body hit the early Earth almost 4.5 billion years ago. This idea explains a great deal about the Earth and its Moon's composition, and the way the Moon orbits Earth.

Scientists expect such massive collisions were more common in the early Solar System, indeed they are part of the story of how all planets are thought to form. But Uranus must have experienced impacts that were very different from Earth simply because Uranus formed so much farther from the Sun. Since the Earth formed closer to the Sun where the environment was hotter, it is mostly made of what scientists call 'non-volatile' elements, meaning they don't form gases at normal Earth-surface pressures and temperatures; they are made of rock. In contrast, the outermost planets are largely composed of 'volatile' elements, for example things like water and ammonia. Even though these would be gases or liquids under Earth-surface like temperatures and pressures, at the huge distances from the Sun the outer planets orbit, they are frozen into solid ice.

According to professor Ida and his colleagues' study, giant impacts on distant icy planets would be completely different from those involving rocky planets, such as the impact scientists believe formed Earth's Moon. Because the temperature at which water ice forms is low, the impact debris from Uranus and its icy impactor would have mostly vapourised during the collision. This may have also been true for the rocky material involved in Earth's Moon-forming impact, but in contrast this rocky material had a very high condensation temperature, meaning it solidified quickly, and thus Earth's Moon was able to collect a significant amount of the debris created by the collision due to its own gravity. In the case of Uranus, a large icy impactor was able to tilt the planet, give it a rapid rotation period (Uranus' 'day' is presently ~ 17 hours, even faster than Earth's), and the leftover material from the collision remained gaseous longer. The largest mass body, what would become Uranus, then collected most of the leftovers, and thus Uranus' present moons are small. To be precise, the ratio of Uranus' mass to Uranus' moons' masses is greater than the ratio of Earth's mass to its moon by a factor of more than a hundred. Ida and colleagues' model beautifully reproduces the current configuration of Uranus' satellites.

As Professor Ida explains, 'This model is the first to explain the configuration of Uranus' moon system, and it may help explain the configurations of other icy planets in our Solar System such as Neptune. Beyond this, astronomers have now discovered thousands of planets around other stars, so-called exoplanets, and observations suggest that many of the newly discovered planets known as super-Earths in exoplanetary systems may consist largely of water ice and this model can also be applied to these planets.'