More clues for how the monkeyflower got its spots 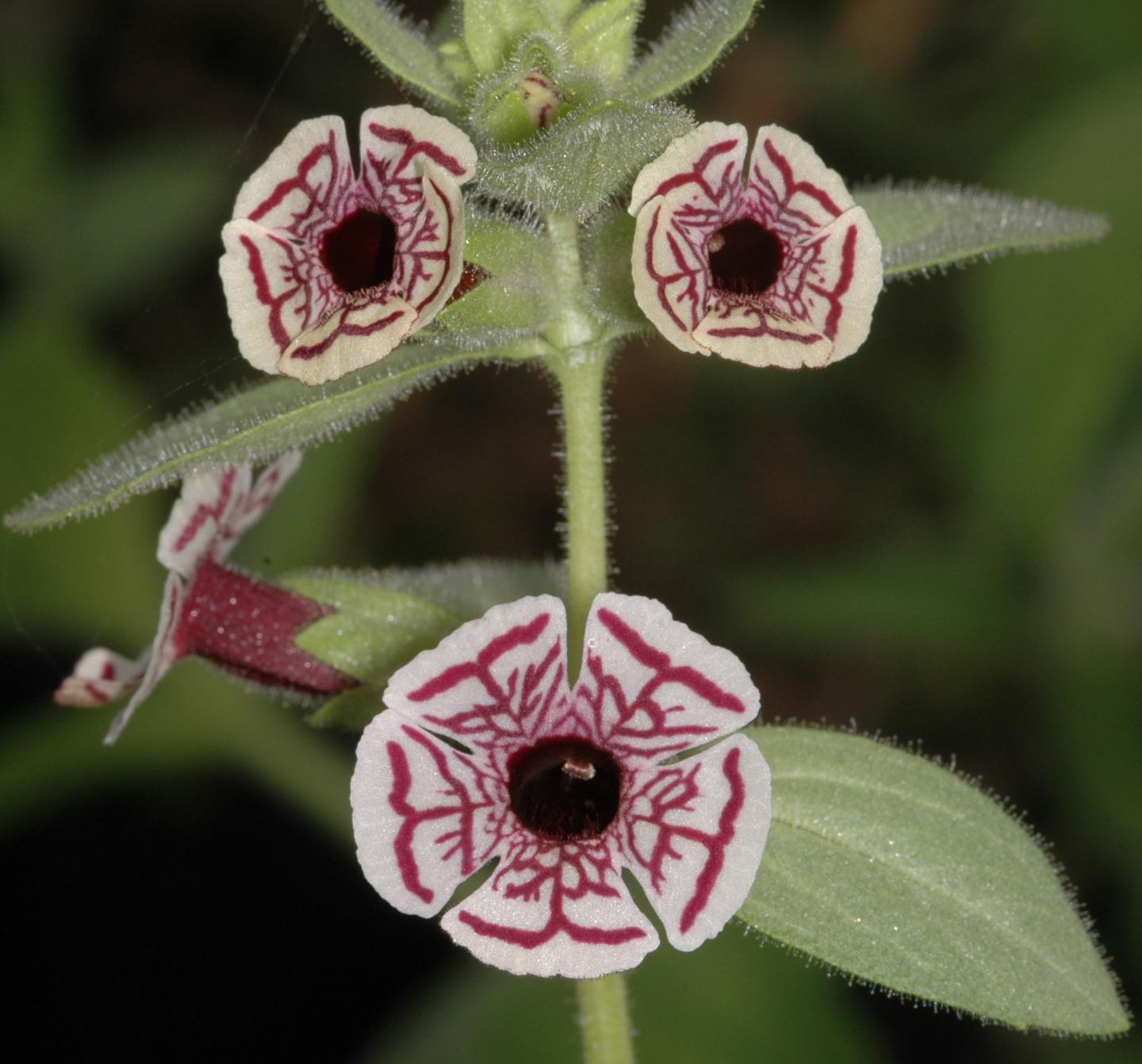 IMAGE: An example of the variations seen in Mimulus species, this flower is Mimulus pictus, shows how intricate patterns can arise.

The monkeyflower, or Mimulus, though possessing a relatively simple genome is able to produce a stunning array of pigmentation patterns. A team of researchers is one step closer to understanding exactly how this genus of wildflowers is able to achieve such remarkable diversity, their work will be published Thursday in Current Biology.

Visual variations such as spots or stripes can act as camouflage and potentially as a means of communication between species throughout nature. The mechanisms that give rise to these variations have stumped not only biologists, but also mathematicians for centuries.

"Patterns are everywhere in nature, not just color patterns but even how leaves are arranged on a stem, really anything with periodicity. Explaining these patterns could be similar in principle and that is what we're hoping to do," says UConn Associate Professor of Ecology and Evolutionary Biology Yaowu Yuan.

In the case of monkeyflowers, colorful anthocyanin spots attract and act as guides to help pollinators home-in on the nectar in the flowers. Alterations of these signal patterns could impact the flower's chance at pollination and seed production, therefor careful regulation of the system is paramount and the researchers were interested in learning about these developmental mechanisms.

Previously, mathematicians developed a theory to try to explain how the patterns of pigmentation may arise, for instance with the stripes on zebras or the spots on leopards. This theory was that there must be some sort of reaction-diffusion effect occurring. It is speculated that the reaction involves an activator-inhibitor system governed by two proteins -- an activator and a repressor. In theory the activator activates itself as well as the repressor. Once the repressor is activated in a pigment cell, there is a reaction-diffusion effect where the repressors fine-tunes pigment production in surrounding cells depending on the concentration of the repressor that diffuses into those cells.

The monkeyflower is a good model organism for studying this phenomena due to the relatively small genome, the fact the genome has been sequenced, but also because the flowers are easy to grow and amenable to experimental manipulations.

The project initially started as two separate projects and the opportunity to collaborate happened almost by chance says Yuan, after seeing a presentation by one of the three co-first authors, Erin Patterson from Ben Blackman's lab at the University of California Berkeley, about a gene that Yuan's group was also working with.

Previously, a gene called Nectar Guide Anthocyanin (NEGAN) was found to be self-regulating and activating anthocyanin production. If the gene is disrupted, no nectar guide spots are formed on the flowers.

If true, according to the reaction-diffusion model if the inhibitor is activated by NEGAN, the inhibitor would diffuse to surrounding cells, inhibit NEGAN function, and thus influence the formation of pigments in those cells.

Through experimentation, the team was able to prove their theoretical predictions about the RTO and NEGAN mechanism. NEGAN activates the expression of the RTO inhibitor, and the RTO inhibitor represses the activity of NEGAN. They also found that RTO is able to move between cells and influence the expression of anthocyanin spot formation through a reaction-diffusion mechanism.

After experimentally manipulating the expression of the genes, the next step was to develop a mathematical model and for this, the team collaborated with Michael Blinov at the Center for Cell Analysis and Modelling at the UConn School of Medicine.

"Now with these computer simulations, we can change parameters, for instance the strength of the inhibitor and achieve different patterns," says Yuan, "We plan to continue working to define parameters of the models to make the model more reflective of the actual biology."

Through strengthening the model parameters, Yuan has hopes for using the model in other experimental organisms one day. With pairing mathematical models with biological systems in this work each helps to validate the other.

The group effort, including the work of the co-first authors Ding, Patterson, and Holalu has really strengthened the research says Yuan.

"This work is the simplest demonstration of the reaction-diffusion theory of how patterns arise in biological systems," says Yuan. We are closer to understanding how these patterns arise throughout nature.