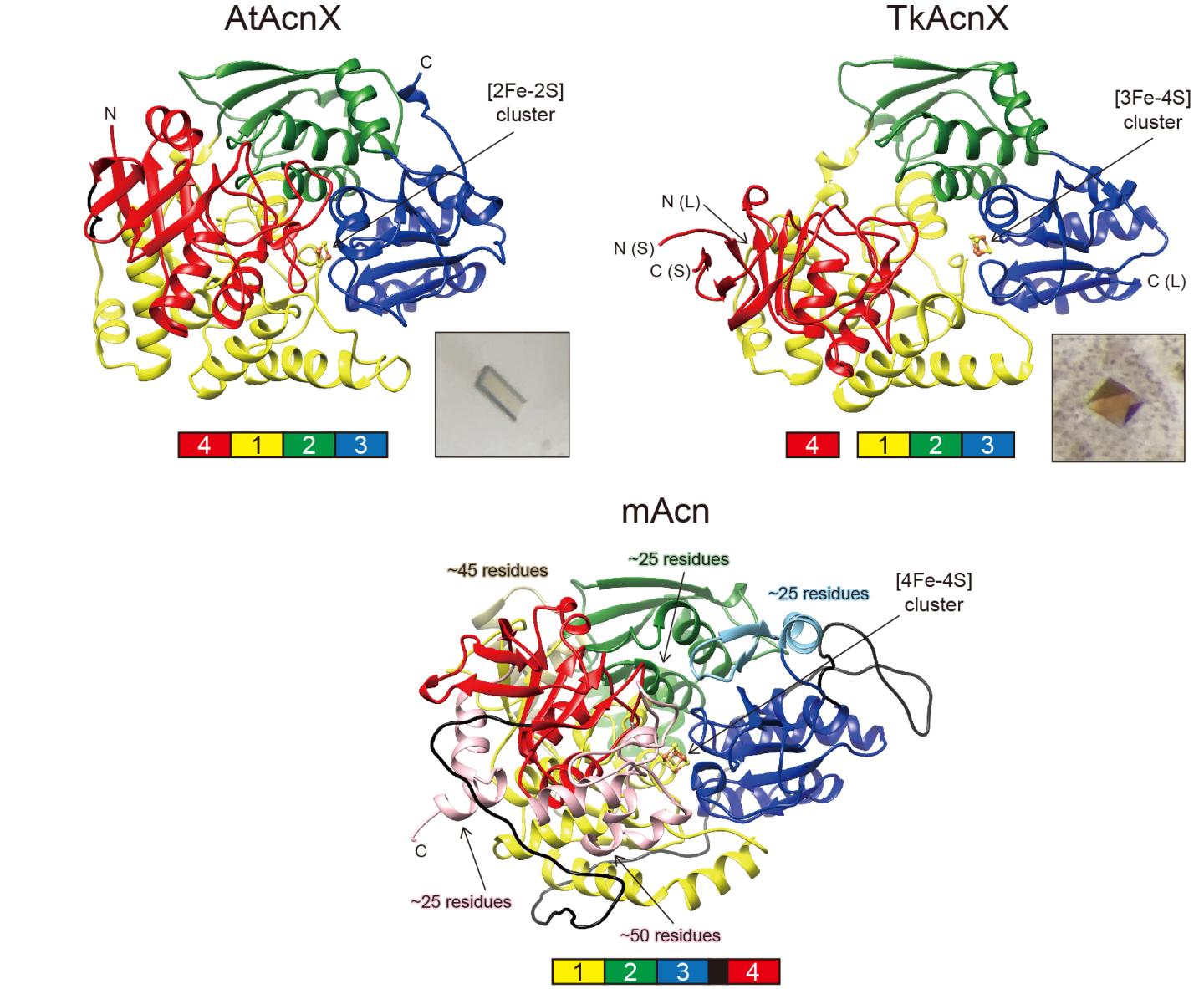 image: These molecules commonly contain the indicated [Fe-S] cluster, and consist of four distinct domains 1 (yellow), 2 (green), 3 (blue), and 4 (red) and a linker region (black). The small subunit of TkAcnX corresponds to fragmented domain 4. In comparisons with AcnX, several large insertions in domains 1-4 of mAcn were colored in ocher, light-green, light-blue, and pink, respectively.

The aconitase superfamily currently contains four functional enzymes including the archetypical aconitase (referred to as "other aconitase enzymes"), and one hypothetical aconitase X (AcnX). The aconitase enzymes catalyze the homologous stereospecific isomerization, and their three-dimensional structures and catalytic mechanisms including the [4Fe-4S] iron-sulfur cluster are very similar each other (Fig. 1a). Therefore, the aconitase superfamily (enzymes) is a typical example that is suitable for the so-called "recruitment hypothesis of enzyme evolution"; the gene duplication of multi-specific enzymes, followed by the narrowing of substrate specificity (ref. 1).

AcnX (subfamily) is further classified into "AcnXType-I" consisting of a single polypeptide, and "AcnXType-II" consisting of (fragmented) small and large polypeptide chains. In 2016, we first revealed that AcnXType-I enzyme from bacteria functions as a cis-3-hydroxy-L-proline (C3LHyp) dehydratase (Fig. 1b) (ref. 2). Furthermore, in 2018, other researchers reported that AcnXType-II enzyme from archaea functions as a mevalonate 5-phosphate (MVA5P) dehydratase (ref. 3). To elucidate their catalytic mechanisms, we herein report for the first time the crystal structures of AcnXType-I from Agrobacterium tumefaciens, a plant pathogenic bacterium (AtAcnX), and AcnXType-II from Thermococcus kodakarensis, a hyperthermophilic archaeon (TkAcnX).

The common ancestor of aconitase superfamily (open circle in Fig. 5), appearing before the previously proposed one (closed circle), had a similar structural framework and a few residues as active site (described above), whereas there was no [Fe-S] cluster. These results provide novel insights into the evolutionary scenario of the aconitase superfamily based on the recruitment hypothesis, and requirement of complicated metabolic pathways in primordial cell.