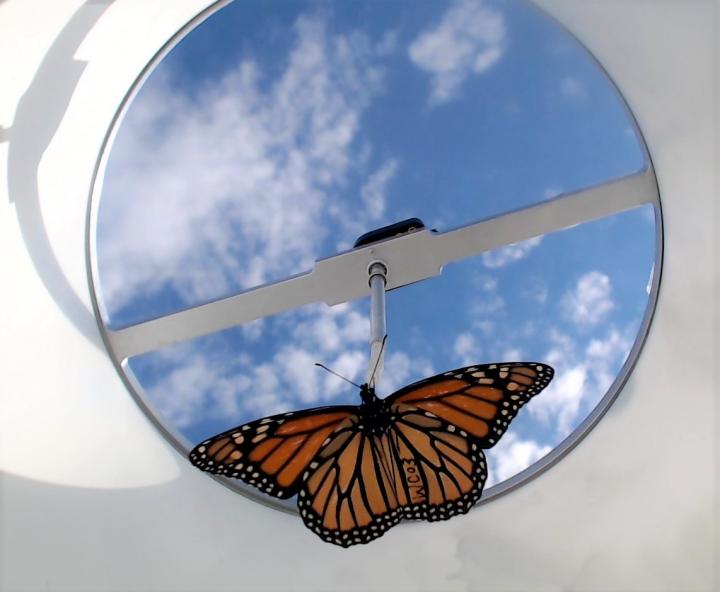 A hallmark of summer, monarch butterflies are a familiar sight in the Midwest, and many butterfly enthusiasts are eager to do what they can to support the declining monarch population. A new study at the University of Chicago provides new insight into the effects that raising monarchs in captivity might have on their ability to migrate south at the end of the summer, and cautions that some methods could have a detrimental impact on the population.

Recognizable by their lacy orange and black wings, monarch butterflies are famous for their seasonal migration. Each fall, millions of monarchs fly from Canada and the northern U.S. south to California and Mexico, where they overwinter before returning north in the spring.

UChicago's Ay?e Tenger-Trolander and Marcus Kronforst, PhD, have been looking into how environmental triggers and genetic variation affect migration behavior. In a 2019 study, they, along with other members of the Kronforst lab, found that a group of commercially bred monarch butterflies seemed to be worse at orienting south than their wild-bred counterparts, spelling trouble for their ability to migrate correctly. What's more, they found that these commercial monarchs had a completely different genetic profile than the wild ones -- likely because commercial-bred monarchs don't have to face the selective pressure of that annual migration.

But that led to more questions. "We published the paper, and other people pointed out that when they tagged commercially bred monarchs before releasing them into the wild, some of them would show up in the overwintering grounds in Mexico," said Kronforst, a professor in the Department of Ecology and Evolution. "We wanted to know what that meant, and at the same time, we wanted to see if we could figure out what environmental cues were necessary to tell monarchs that it's time to start flying south."

The new study, published in Proceedings of the Royal Society B on August 5, 2020, had two components: one looked more closely at the flight behaviors of individual commercially bred monarchs by tracking their flights repeatedly, and the other at the effects of natural sunlight exposure on the migration behavior of wild-bred monarch butterflies.

Using a new strategy of testing the flight behavior of commercially derived butterflies repeatedly, Tenger-Trolander noticed something interesting. "We discovered that it's not that all individuals in the population have completely lost the ability to orient south," said the graduate student. "We found that if you repeatedly test the same individuals over and over again, a proportion of the population do repeatedly fly south. What this means is that while the population on average doesn't seem to show the same drive to fly south, some individuals do still have that response."

The researchers say that these results should provoke caution from the monarch-rearing community when it comes to raising and releasing commercially derived butterflies. "These results indicate that mass-rearing butterflies as a response to the declining monarch population may not be the best approach," Tenger-Trolander said. "Breeding monarchs in large facilities could be having unintended effects on their genetics that makes it harder for the butterflies to fly south, and we should be careful about introducing that trait into the wild population."

But what about wild-bred monarch butterflies? Could eggs and caterpillars taken from a wild environment, as opposed to a commercial producer, be better for the population?

Previous research had found that simply raising monarchs in an environmental chamber that mimicked early fall weather wasn't enough to trigger proper migratory behavior; even monarchs that were sourced from the wild population had a hard time orienting south.

To further pick apart the cues that trigger migration, the researchers opted to raise the wild monarchs in a greenhouse, where the butterflies were exposed to true sunlight throughout the day, as well as raising the insects in the lab near a south-facing window and in a large outdoor cage.

To their surprise, the natural light wasn't enough to trigger the appropriate orienting behavior. Compared to the monarch butterflies raised in the outdoor cages, the ones raised in the greenhouse were worse at flying south.

"This isn't what we expected to happen," Tenger-Trolander said. "This shows us that even if you're working with wild-derived butterflies and providing them with the same environmental and sunlight conditions they would be exposed to outdoors, they still require some unknown cues that we haven't been able to replicate indoors."

While the researchers are stumped for the moment, they have plans to continue working on this question to see if they can determine what environmental conditions are necessary to tell monarch butterflies when to migrate.

"In the fall, you have a lot of potential cues telling the butterflies it's time to go," said Tenger-Trolander. "Is it the sunlight, is it the location of the sun in the sky, is it a change in the plants or in the temperature? Is one of those cues the most critical, or is it a combination? Is there a critical period during the monarch's life cycle for these cues to have the right effect? We just don't know."

Kronforst said they're still trying to figure out what cues are necessary for this behavior and to see if they can dissect which genes are controlling it. "And then the next big question will be, can we rewire a monarch that doesn't want to migrate so that it will orient south properly?"

The researchers say that these results can help inform best practices for those at-home monarch enthusiasts who want to raise the butterflies themselves.

"Raising monarchs can be so educational," said Tenger-Trolander. "Kids get to see this weird, magical process happening right in front of their eyes. It creates a lot of people who are interested in conservation and science, who then go on to become activists for maintaining important habitats for many different species. But the big unanswered question is whether breeding monarchs in captivity or rearing wild caterpillars at home bad for the wild population."

"There are a lot of pros to having people raise monarchs, and it's something a lot of people like to do," Kronforst said. "These results lend support to the idea that if people are interested in raising these butterflies, they should try and keep those conditions as natural as possible, because it's going to lead to healthier insects that are more likely to become migratory, and to make the migration successfully."