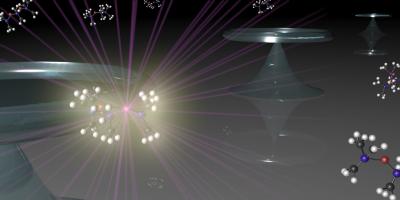 Lasers. They are used for everything from entertaining our cats to encrypting our communications. Unfortunately, lasers can be energy intensive and many are made using toxic materials like arsenic and gallium. To make lasers more sustainable, new materials and lasing mechanisms must be discovered.

Professor Andrea Armani and her team at the USC Viterbi School of Engineering have discovered a new phenomenon and used it to make a laser with over 40 percent efficiency-nearly 10 times higher than other similar lasers. The laser itself is made from a glass ring on a silicon wafer with only a monolayer coating of siloxane molecules anchored to the surface. Thus, it has improved power consumption and is fabricated from more sustainable materials than previous lasers.

The surface Raman laser is based on an extension of the Raman effect, which describes how the interaction of light with a material can induce molecular vibrations that result in light emission. One unique feature of this type of laser is that the emitted wavelength is not defined by the electronic transitions of the material, but instead it is determined by the vibrational frequency of the material. In other words, the emitted laser light can be easily tuned by changing the incident light. In previous work, researchers have made Raman lasers leveraging the Raman effect in "bulk" material, like optical fiber and silicon.

Raman lasers have a wide range of applications including military communications, microscopy and imaging, and in medicine for ablation therapy, a minimally invasive procedure to destroy abnormal tissue such as tumors.

Armani, USC's Ray Irani Chair in Chemical Engineering and Materials Science, said she realized that a different strategy might give even higher performing Raman lasers from sustainable materials like glass.

"The challenge was to create a laser where all of the incident light would be converted into emitted light," Armani said. "In a normal solid-state Raman laser, the molecules are all interacting with each other, reducing the performance. To overcome this, we needed to develop a system where these interactions were reduced."

Armani said that if conventional Raman lasers were thought of as the old energy-inefficient light bulbs many of us grew up with, this new technology would result in the laser equivalent of energy efficient LED lightbulbs; a brighter result requiring lower energy input.

Armani's interdisciplinary team, comprised of chemists, materials scientists and electrical engineers, quickly realized that they could design this type of laser system. Combining surface chemistry and nanofabrication, they developed a method to precisely form a single monolayer of molecules on a nanodevice.

"Think of the molecule as looking like a tree," Armani said. "If you anchor the base of the molecule to the device, like a root to a surface, the molecule's motion is limited. Now, it can't just vibrate in any direction. We discovered that by constraining the motion, you actually increase the efficiency of its movement, and as a result, its ability to act as a laser."

The molecules are attached to the surface of an integrated photonic glass ring, which confines an initial light source. The light inside the ring excites the surface-constrained molecules, which subsequently emit the laser light. Notably, the efficiency is actually improved nearly 10 times, even though there is less material.

Additionally, just like conventional Raman lasing, by simply changing the wavelength of light inside the ring, the emission wavelength from the molecules will change. This flexibility is one reason why Raman lasers - and now Surface Stimulated Raman lasers - are so popular across numerous fields including defense, diagnostics, and communications.

Armani said the team managed to bind the molecules to the surface of the glass ring by harnessing the hydroxyl molecule groups on the surface, entities with the formula OH, that contain oxygen bonded to hydrogen, using a process called silanization surface chemistry. This reaction forms a single monolayer of precisely oriented individual molecules.

The discovery is a passion project for Armani; one that she has been pursuing since her days as Ph.D. student.

"This is a question I've been wanting to look into for a while, but it just wasn't the right time and the right place and right team to be able to answer it," she said.

Armani said the research has the potential to significantly reduce the input power required to operate Raman lasers as well as impact numerous other applications.

"The Raman effect is a fundamental, Nobel-Prize winning science behavior originally discovered in the early 20th century," Armani said. "The idea of contributing something new to this rich field is very rewarding ."