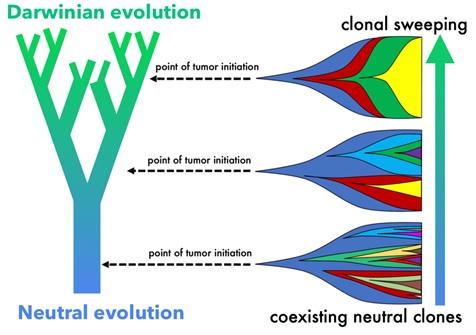 TAMPA, Fla. -- Tumors are genetically diverse with different mutations arising at different times throughout growth and development. Many models have tried to explain how genetic heterogeneity arises and what impact these alterations have on tumor growth. In a new article published in Nature Communications, Moffitt Cancer Center researchers show how the location of the tumor and spatial constraints put on it by the surrounding tissue architecture impact genetic heterogeneity of tumors.

Genetic differences are apparent among tumors from different patients, as well as within different regions of the same tumor of an individual patient. Some of these mutations may benefit the tumor and become selected for, such as mutations that allow the tumor to grow faster and spread to other sites. This type of tumor evolution is known as Darwinian evolution. Alternatively, other cellular mutations may have no immediate impact on the tumor but still accumulate over time, known as neutral evolution. Researchers in Moffitt's Center of Excellence for Evolutionary Therapy wanted to determine how the surrounding tissue architecture impacts these different types of tumor evolution patterns and genetic heterogeneity.

The team used mathematical modeling to determine how spatial constraints impact tumor evolution with a focus on the three-dimensional architecture of ductal carcinoma of the breast. They used a well-studied model of tumor evolution and altered variables related to spatial constraints and cell mixing and demonstrated that the surrounding tissue architecture greatly affects the genetic heterogeneity of tumors over time. For example, the ductal network of breast tissue is similar to the trunk and branches of a tree. A tumor that forms within the wider region of the base of the duct has less spatial constraints placed on it compared to a tumor that initially forms in the smaller ductal branches. As a result, a tumor near the base tends to acquire mutations over an extended time and will have more genetic heterogeneity due to neutral evolution. On the other hand, a tumor within the smaller ductal regions tends to undergo accelerated genetic changes that result in one mutation becoming dominant due to Darwinian evolution, - also known as clonal sweep.

"Two otherwise identical tumors may realize dramatic differences in ?tness depending on constraints imposed by tissue architecture," said Sandy Anderson, Ph.D., study author and director of the Center of Excellence for Evolutionary Therapy at Moffitt. "On the cell scale, any given subclone may have a selective advantage. Yet, the effective outcome of this subclonal advantage depends on the surrounding competitive context of that cell. In other words, cell-speci?c phenotypic behavior can be 'overridden' by the tissue architecture, allowing the tumor to realize increased ?tness."

The study sheds light on the important role that tumor location has in the development and progression of cancer and helps explain the wide variety of mutational patterns observed among different patients.

"Our approach adds clarity to the debate of neutral tumor evolution by exploring a key mechanism behind both interpatient and intratumoral tumor heterogeneity: competition for space," said Jeffrey West, Ph.D., study co-author and postdoctoral fellow in the Integrated Mathematical Oncology Department at Moffitt.