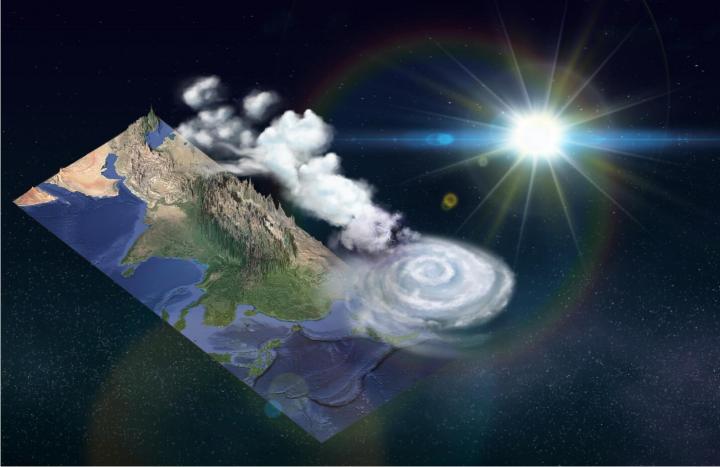 Monsoons can have a significant impact on human populations all around the world, bringing heavy rainfall associated with flooding and mudslides that can damage crops and pose a health and safety risk. In countries such as India, monsoons also provide a vital source of water needed for growing crops. Being able to accurately forecast monsoons, as well as predict climate changes that drive these events, is of great benefit to humanity as it can help communities to better prepare and plan, which can improve safety and reduce economic losses. A team of researchers from the Chinese Academy of Sciences have conducted a series of model perturbation experiments, producing datasets that can help improve these predictions.

The model design, experiments and datasets from the simulations are described in a data description paper recently published on December 10, 2019 in Advances in Atmospheric Sciences.

A monsoon is a seasonal change in atmospheric circulation or prevailing wind direction that is associated with corresponding changes in precipitation resulting from uneven heating of sea and land surfaces. Monsoons blow from cold regions to warm regions, and are responsible for wet and dry seasons in the tropics. However, because external factors such as the location of land masses and oceans can influence regional wind and rainfall patterns, the characteristics and behavior of monsoons vary from region to region. The South Asian monsoon, for example, is particularly strong as the Himalayas and Tibetan-Iranian Plateau prevent dry air from the north flowing to the humid monsoon region in India and southern Asia.

The Chinese Academy of Sciences (CAS) Flexible Global Ocean-Atmosphere-Land System (FGOALS-f3-L) model datasets prepared for the sixth phase of the Coupled Model Intercomparison Project (CMIP6) Global Monsoons Model Intercomparison Project (GMMIP) provide a valuable tool to assess sea surface temperature trends and its influence on monsoon circulation and precipitation patterns, while also providing a clearer understanding of how topography can affect the global monsoon system as it passes over landscapes with high altitudes.

"These datasets are useful especially for understanding the changes of sub-seasonal climate signals forced by the Tibetan-Iranian Plateau," said lead author, Bian He, a research scientist at the State Key Laboratory of Numerical Modeling for Atmospheric Sciences and Geophysical Fluid Dynamics (LASG), Institute of Atmospheric Physics (IAP), Chinese Academy of Sciences (CAS), and College of Earth and Planetary Sciences, University of Chinese Academy of Sciences, in Beijing, China.

The global monsoon system is made up of several sub-monsoon systems, including the Asian, Australian, northern and southern African, North American and South American monsoons, each with their own unique characteristics and behaviors relative to when and where they occur. These differences have proved challenging for current climate models, primarily because we do not yet fully understand the complex atmosphere-ocean-land interactions that drive monsoon systems, which in turn are influenced by external forces and internal variabilities.

Topography can affect weather, for example, by forcing air upwards which can cause disturbances in the weather system. As the air rises, changes in pressure and temperature can result in precipitation -- a phenomenon known as the orographic effect or orographic precipitation. While it is acknowledged that topography can influence monsoons, there is still much debate regarding the direct impact that global highlands have on monsoon circulation and precipitation.

"We provided three ensemble simulations of long-term changes of the global monsoon under observed Sea Surface Temperature (SST) and Sea ice forcing to reduce uncertainty from the initial method," explained He, "We also provided high time frequency outputs in GMMIP Tier-3 experiments for better understanding the role of the Tibetan Plateau in the global monsoon system by transient processes."

This is one of two papers the authors contributed to the IPCC CMIP6 world climate research programme. The companion paper describes the outputs of the Chinese Academy of Sciences (CAS) Flexible Global Ocean-Atmosphere-Land System (FGOALS-f3-L) model for the baseline experiment of the Atmospheric Model Intercomparison Project simulation in the Diagnostic, Evaluation and Characterization of Klima common experiments of phase 6 of the Coupled Model Intercomparison Project (CMIP6).

"Our next step is to consider air-sea interactions in the simulation, as this is also an important factor in understanding global monsoons and associated topographical effects," said He. "Our ultimate goal is to improve model simulations on monsoon behavior in order to more accurately forecast monsoons."