Mites can change their diet depending on environmental conditions 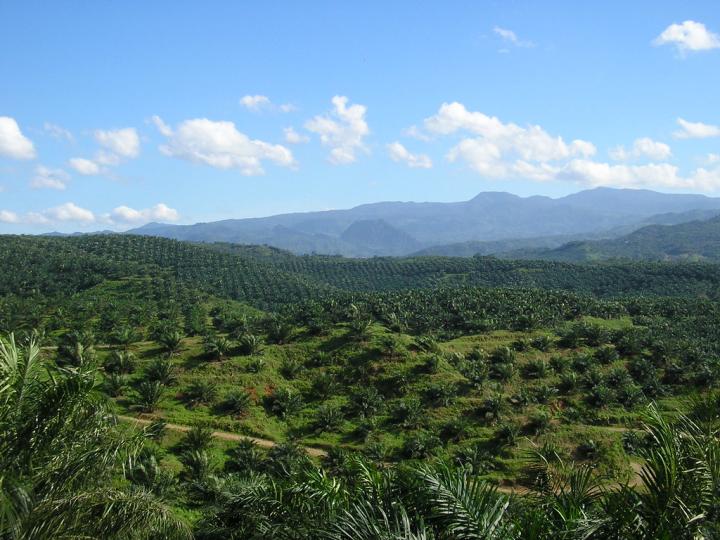 IMAGE: This is a view of a palm oil plantation in Indonesia

The transformation and degradation of natural landscapes due to human activities has been intensifying for several decades. This is especially true for forestland: its area decreases each year, especially in tropical regions. In Southeast Asia, tropical rainforests are cut down to make room for new plantations. Around 0.4 mln ha of forests are destroyed every year on Sumatra (Indonesia) only.

These actions affect the biodiversity of soil fauna that are key in nutrient cycling and other biological processes. Large-scale deforestation influences the activities and diets of soil animals, forcing them to adapt to new conditions. For example, instead of hunting rainforest dwellers, some predatory myriapods switch to less nutritious species that can be found on oil palm plantations.
The study, carried out by the Institute for Ecological and Agricultural Biology (X-BIO) of Tyumen State University in collaboration with foreign colleagues, was a part of an interdisciplinary project titled "Ecological and Socioeconomic Functions of Tropical Lowland Rainforest Transformation Systems". The study focused on oribatid mites (Oribatida), one of the most widely-spread soil arthropods in the world. Eleven thousand species of these mites are currently known to scientists, but there are likely many more.

The authors suggest that oribatid mites may adapt to environmental change by altering their diet. To confirm this hypothesis, the scientists measured nitrogen and carbon isotope ratios in six species of mites. The specimens were obtained from the tropical rainforest, rubber tree jungle, rubber tree plantation, and oil palm plantation habitats. Mites were taken from soil samples that came from two different regions of Jambi Province, Indonesia. Afterwards, the mites were divided into groups or guilds based on their diet: lichenophages (feed on lichen), primary saprophages (leaf litter), secondary saprophages-mycophages (floccus), and predators/scavengers.
Subsequently, the scientists measured stable nitrogen and carbon isotopes in the ex?rements of the mites, calculated the average values for each geographical area, and calculated the deviations for each species.

According to the researchers, the levels of stable isotopes differed considerably in mites from different land-use systems. In particular, Rostrozetes sp. found on oil palm plantations had lower nitrogen isotope content than mites of the same species from any other environment. For S. praeincisus, the lowest nitrogen content was found in the tropical rainforest, while the highest - in the rubber tree jungle. This means that mites switch from one food source to another depending on the environment. The research showed that oribatid mites, which are usually saprophages, turn into predators or scavengers, changing their diet depending on the environmental circumstances. R. cf. shibai mites were found to be saprophageous in the plantation and rainforest environments, while in the rubber tree jungle they displayed predatory dietary patterns. However, B. mahunkai mites were predacious in all sampled environments, which points to the fact that not all mites adapt their dietary patterns to the environmental conditions.

According to the study, oribatid mites are able to change their diet depending on the fluctuations in the available food resources. The biggest shifts occur when mites transition from living in natural ecosystems (rainforest or rubber tree jungle) to intensive land use environments (rubber tree or oil palm plantations). Based on the results of this study, scientists may be able to monitor man-induced changes in natural habitats using oribatid mites.