"It brings parents comfort to know it's going to be a small incision, an outpatient surgery with no drains or staples on the skin. We just use some glue for the skin and the recovery is very rapid," said Dr. David Terris, Chairman of the Department of Otolaryngology-Head and Neck Surgery at Georgia Health Sciences University.

The results should bring comfort as well with complication rates of minimally invasive thyroid surgery on par with the standard surgical approach that can leave a several-inch scar at the base of the neck. Terris and Dr. Melanie W. Seybt, endocrine-head and neck surgeon at GHSU, co-authored the study published in Annals of Otology, Rhinology and Laryngology.

The GHSU study looked at 23 patients under age 21 at MCGHealth Children's Medical Center who have had thyroid procedures over a five-year period beginning in 2003, when GHSU surgeons first started using minimally-invasive techniques in young patients. They also compared data such as complication rates and hospital stays to those of children who had surgery at the Augusta facility from 1998-2003.

They found about 70 percent of the 2003-08 group had outpatient surgery while the majority of the earlier group required hospital admission. The less-invasive approach also meant, on average, a less than 1-inch scar as well as less scar tissue, a big plus if additional surgery is ever needed. 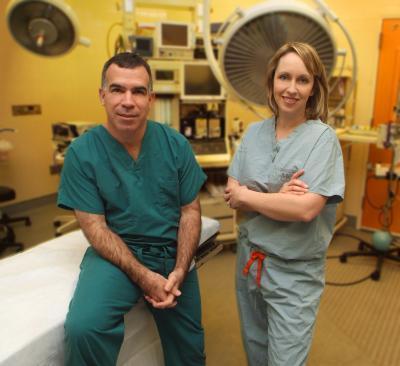 "Complication rates were similar so we are not compromising the effectiveness of the surgery in children," Terris said. The minimally invasive group had no instances of permanent damage to the nerve to the voice box or disruption of calcium level regulation, two primary complications of thyroid surgery.

"It works well in pediatric patients, geriatric patients and anyone in between," Terris said of the less-invasive approach. "The technique is very reliable, very reproducible and less invasive so it's logical that it would have all of those advantages regardless of the patient's age."

Nearly half the children in the 2003-08 group had cancerous growths compared to about a 5 percent incidence in adults. The risk of thyroid growth increases with age. "The thyroid should not form many nodules in an 8- or 12-year-old," Terris said. When cancer is found, patients receive radioactive iodine that selectively destroys cells that can remain after surgery. Thyroid cells are the only cells that absorb iodine so the radioactive version is also taken up by thyroid cells that have become cancerous. Years later, cancer cells may recur in nearby lymph nodes but typically the nodes can be safely removed, Terris said. He notes that thyroid cancer typically is highly treatable because it may act more like a chronic disease than a killer.

Children eligible for a minimally invasive approach likely are best treated in a high-volume thyroid center, he and Seybt write. They are continuing to monitor the success of the approach in a larger number of children and beginning to use the daVinci robotic Surgical System, which enables a behind-the-ear incision that eliminates any neck scar.

In 2009 in Archives of Otolaryngology – Head and Neck Surgery, Seybt showed that thyroid surgery was safe for older patients who had outpatient surgery rates and complication rates similar to those of younger patients. Terris reported in 2006 in Laryngoscope that the newer, minimally invasive approaches, which reduce incision size and recovery time, are safe for most adults.

Thyroid problems are most common in women. Although the cause is unknown, exposure to head and neck radiation is a risk factor. Because of the close proximity to the nerves that supply the vocal cords, thyroid surgery can cause transient or permanent hoarseness. Low calcium levels are a common complication because the adjacent parathyroid glands are typically a little stunned by removal of the thyroid gland. To help avoid problems, patients are routinely placed on a three-week tapering dose of calcium but sometimes still have transient problems, most commonly numbness or tingling around the lips and cramping of the hands and feet.