Milky Way black hole may be a colossal 'particle accelerator'

Scientists were startled when they discovered in 2004 that the center of our galaxy is emitting gamma rays with energies in the tens of trillions of electronvolts.

Now astrophysicists at The University of Arizona, Los Alamos National Laboratory and the University of Adelaide (Australia) have discovered a mechanism that might produce these high-energy gamma rays. The black hole at the center of our Milky Way could be working like a cosmic particle accelerator, revving up protons that smash at incredible speeds into lower energy protons and creating high-energy gamma rays, they report. 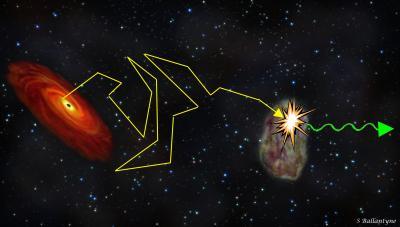 This graphic illustrates the idea that the black hole at the center of the Milky Way is like an extremely powerful particle accelerator, revving up protons in the surrounding magnetic plasma and slinging them into lower-energy protons with such energy that high-energy gamma rays result from the collision. The yellow line depicts the chaotic flight of a high-energy proton flung into a lower-energy proton in the hydrogen gas cloud. The green arrow represents the high-energy gamma ray that results from the proton collision. Credit: Sarah Ballantyne

"It's similar to the same kind of particle physics experiments that the Large Hadron Collider being built at CERN will perform," UA astrophysicist David Ballantyne said.

For the last several years, Melia has been developing a theory of what may be going on very close to the Milky Way's black hole. Melia and his group find that powerful, chaotic magnetic fields accelerate protons and other particles near the black hole to extremely high energies.

"Our galaxy's central supermassive object has been a constant source of surprise ever since it's discovery some 30 years ago," Melia said. "Slowly but surely it has become the best studied and most compelling black hole in the universe. Now we're even finding that its apparent quietness over much of the spectrum belies the real power it generates a mere breath above its event horizon---the point of no return."

The Milky Way black hole "is one of the most energetic particle accelerators in the galaxy, but it does this by proxy, by cajoling the magnetized plasma haplessly trapped within its clutches into slinging protons to unearthly speeds," Melia said.

"We calculated very exactly how the protons would travel in this medium, taking into account specifically the magnetic force that changes the protons' trajectories," he said. The team calculated 222,000 proton trajectories for a statistically solid study.

Even though the protons move close to the speed of light, their motion is so random that it takes several thousand years for the particles to travel beyond 10 light years of the black hole. After the high-energy protons escape the black hole environment, they fly off into the interstellar medium, where they collide with low-energy protons (hydrogen gas) in a smash-up so energetic that particles called 'pions' form. These particles of matter quickly decay into high-energy gamma rays that, like other radiation, travel in all directions.

Ballantyne, Melia and and their colleagues found that this process can explain the energy spectrum and brightness of gamma-ray emission that astronomers observe. Researchers detect the high-energy gamma-ray emission with ground-based telescopes at Namibia, Africa, at Whipple Observatory in southeastern Arizona, and elsewhere.

"Ironically, even though our galaxy's central black hole does not itself abundantly eject hyper-relativistic plasma into the surrounding medium, this discovery may indirectly explain how the most powerful black holes in the universe, including quasars, produce their enormous jets extending over intergalactic proportions. The same particle slinging almost certainly occurs in all black-hole systems, though with much greater power earlier in the universe," Melia said.

Only 31 percent of the 222,000 proton trajectories in their sample produced gamma rays within 10 light years of the black hole, Ballantyne said. The other 69 percent escape to greater distances, where presumably they, too, will interact in gamma ray-generating collisions.

"Astronomers do, indeed, observe a glow of very-high energy gamma-rays from the inner regions of the galaxy," Ballantyne said. "It's possible that this emission is also caused by protons accelerated close to the central black hole."

Written from a news release by University of Arizona.