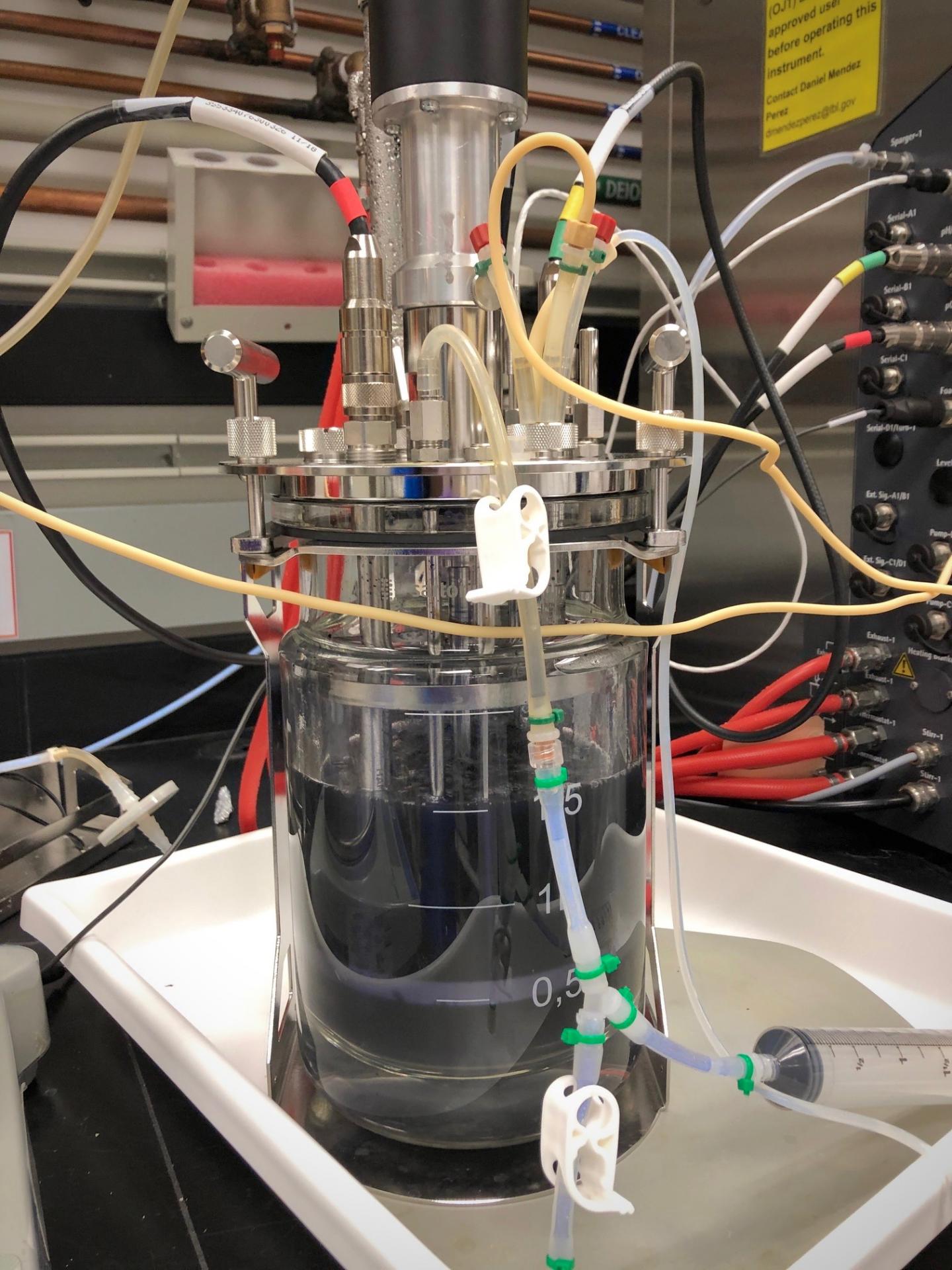 IMAGE: A two-liter bioreactor containing an P. putida culture that has undergone metabolic rewiring to produce indigoidine all the time.

Their approach could dramatically speed up the research and development phase for new biomanufacturing processes, and get cutting-edge bio-based products such as sustainable fuels and plastic alternatives on the shelves faster.

The process uses computer algorithms - based on real-world experimental data - to identify what genes in a "host" microbe could be switched off to redirect the organism's energy toward producing high quantities of a target compound, rather than its normal soup of metabolic products.

Currently, many scientists in this field still rely on ad hoc, trial-and-error experiments to identify what gene modifications lead to improvements. Additionally, most microbes used in biomanufacturing processes that produce a nonnative compound - meaning the genes to make it have been inserted into the host genome - can only generate large quantities of the target compound after the microbe has reached a certain growth phase, resulting in slow processes that waste energy while incubating the microbes.

The team's streamlined metabolic rewiring process, coined "product/substrate pairing," makes it so the microbe's entire metabolism is linked to making the compound at all times.

To test product/substrate pairing, the team performed experiments with a promising emerging host - a soil microbe called Pseudomonas putida - that had been engineered to carry the genes to make indigoidine, a blue pigment. The scientists evaluated 63 potential rewiring strategies and, using a workflow that systematically evaluates possible outcomes for desirable host characteristics, determined that only one of these was experimentally realistic. Then, they performed CRISPR interference (CRISPRi) to block the expression of 14 genes, as guided by their computational predictions.

"We were thrilled to see that our strain produced extremely high yields of indigoidine after we targeted such a large number of genes simultaneously," said co-lead author Deepanwita Banerjee, a postdoctoral researcher at the Joint BioEnergy Institute (JBEI), which is managed by Berkeley Lab. "The current standard for metabolic rewiring is to laboriously target one gene at a time, rather than many genes all at once," she said, noting that before this paper there was only one previous study in metabolic engineering in which the authors targeted six genes for knockdown. "We have substantially raised the upper limit on simultaneous modifications by using powerful CRISPRi-based approaches. This now opens up the field to consider computational optimization methods even when they necessitate a large number of genetic modifications, because they can truly lead to transformative output," said Banerjee.

Co-lead author Thomas Eng, a JBEI research scientist, added, "With product/substrate pairing, we believe we can significantly reduce the time it takes to develop a commercial-scale biomanufacturing process with our rationally designed process. It's daunting to think of the sheer number of research years and people hours spent on developing artemisinin (an antimalarial) or 1-3,butanediol (a chemical used to make plastics) - about five to 10 years from the lab notebook to pilot plant. Dramatically reducing R&D time scales is what we need to make tomorrow's bioeconomy a reality," he said.

Examples of target compounds under investigation at Berkeley Lab include isopentenol, a promising biofuel; components of flame-retardant materials; and replacements for petroleum-derived starter molecules used in industry, such as nylon precursors. Many other groups use biomanufacturing to produce advanced medicines.

Principal investigator Aindrila Mukhopadhyay explained that the team's success came from its multidisciplinary approach. "Not only did this work require rigorous computational modeling and state-of-the-art genetics, we also relied on our collaborators at the Advanced Biofuels and Bioproducts Process Development Unit (ABPDU) to demonstrate that our process could hold its desirable features at higher production scales," said Mukhopadhyay, who is the vice president of the biofuels and bioproducts division and director of the host engineering group at JBEI. "We also collaborated with the Department of Energy (DOE) Joint Genome Institute to characterize our strain. Not surprisingly, we anticipate many such future collaborations to examine the economic value of the improvements we obtained, and to delve deeper in characterizing this drastic metabolic rewiring."