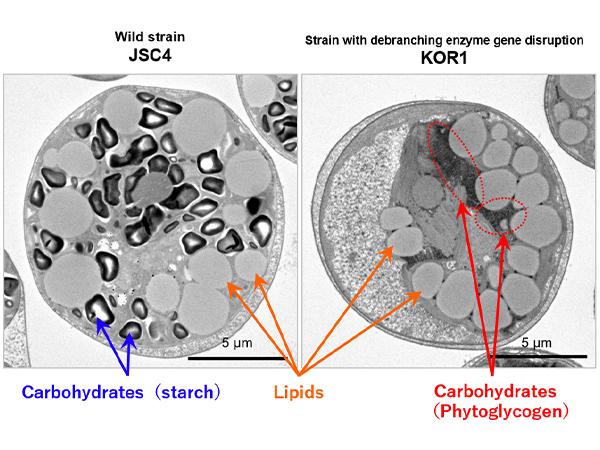 A cross-institutional collaboration has developed a technique to repartition carbon resources from carbohydrates to lipids in microalgae. It is hoped that this method can be applied to biofuel production. This discovery was the result of a collaboration between a research group at Kobe University's Engineering Biology Research Center consisting of Project Assistant Professor KATO Yuichi and Professor HASUNUMA Tomohisa et al., and Senior Researcher SATOH Katsuya et al. at the Takasaki Advanced Radiation Research Institute of the Quantum Beam Science Research Directorate (National institutes for Quantum and Radiological Science and Technology).

These research results were published on April 9, 2021 in the international academic journal Communications Biology.

Microalgae are highly capable of producing lipids by fixing atmospheric CO2 via photosynthesis, making them promising candidates for biofuel production.

In light/dark conditions (i.e. day and night), the majority of microalgae's carbon resources obtained from CO2 are accumulated as carbohydrates (starch). This makes it difficult to get microalgae to produce lipids.

The researchers used ion beam mutagenesis to develop a strain of microalgae that can produce large amounts of lipids even under light/dark conditions.

In this microalgae mutant, the starch debranching enzyme gene was disrupted, causing it to produce phytoglycogen, which is easily broken down. The carbon resources were then repartitioned from carbohydrate production to lipid production.

Biofuels are renewable resources that have received much attention in the move towards creating more sustainable societies. Microalgae are photosynthetic organisms that are highly capable of producing lipids from carbon dioxide in the atmosphere, making them promising candidates for biofuel production. However, a Kobe University research group consisting of Project Assistant Professor Kato Yuichi and Professor Hasunuma Tomohisa et al. discovered that the majority of carbon resources were diverted to starch production instead of lipid production under light/dark conditions (i.e. day and night). This is a problem when cultivating microalgae species outside.

For this research study, Project Assistant Professor Kato and Professor Hasunuma's Kobe University research group collaborated with Senior Researcher Satoh et al. at the National institutes for Quantum and Radiological Science and Technology (QST). The researchers used the ion beam at QST's Takasaki Advanced Radiation Research Institute to induce mutation in the microalgae. This enabled them to cultivate a new mutant strain called Chlamydomonas sp. KOR1 (*1), which can produce large quantities of lipids even in light/dark conditions.

The researchers discovered that this KOR1 strain has disruptions in the starch debranching enzyme (*2) gene ISA1, causing it to produce a different carbohydrate: phytoglycogen (*3) instead of starch (Figure 1).

Normally, microalgae synthesize and accumulate carbohydrates (starch) during light periods and break them down when it is dark. However, many carbohydrates accumulate that cannot be completely broken down. Contrary to this, the carbohydrate synthesized by KOR1 (phytoglycogen) was completely broken down during the dark period. The results of the KOR1 metabolome analysis (*4) revealed a total increase in intermediate metabolites in both the starch and lipid synthesis pathways (intermediate metabolites included fructose-6-phosphate, glucose-6-phosphate, acetyl-CoA and glycerol 3-phosphate). From this analysis, the researchers illuminated the metabolic mechanism underlying the increased lipid production that resulted from ISA1 gene disruption. In the KOR1 strain, the carbohydrate (phytoglycogen) was quickly broken down and intermediate metabolites subsequently induced the carbon resource to be repartitioned to lipid production (Figure 2).

In order to produce biofuels using microalgae, it is necessary to cultivate these organisms outside in the sunlight. However, there is an unavoidable decrease in lipid production under these light/dark conditions. The technique of 'repartitioning carbon resources by disrupting the starch debranching enzyme gene' developed through this research is one answer to this problem. It is hoped that this new method can contribute towards the large-scale implementation of biofuel production using microalgae.