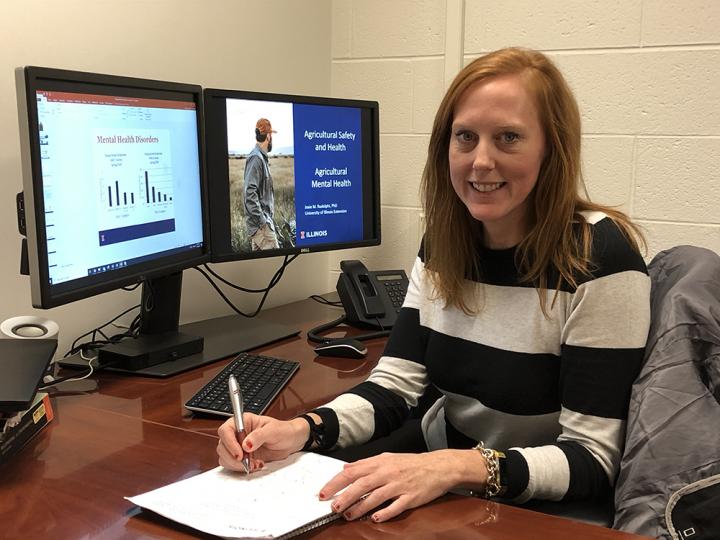 IMAGE: Josie Rudolphi, assistant professor of agricultural and biological engineering at the University of Illinois, found that farmers prefer to receive mental health information face-to-face, from family and friends.

URBANA, Ill. - Mental health is a concern in rural areas, as farmers cope with stress and uncertainty due to economic and environmental conditions. Often, there are no mental health providers in the local community. Public health programs can help, but what are the best ways to reach farm populations with those programs? That's the topic of a new study conducted by a University of Illinois researcher.

"We know it's a problem in the population, and we know access to mental health care is not always available in rural areas," says Josie Rudolphi, assistant professor of agricultural and biological engineering at the U of I. She notes, from a previous study she conducted, that up to 60% of young farmers and ranchers reported at least mild symptoms of depression and 70% reported at least mild symptoms of anxiety.

Rudolphi worked with the Marshfield Clinic Research Institute in central Wisconsin to deliver a program called Mental Health First Aid (MHFA) to local communities. MHFA is an eight-hour course that trains people to provide assistance to those suffering from mental health issues. The program aims to reduce stigma, and it offers a five-step action plan to assess a problem, provide recommendations, and de-escalate a crisis situation.

"We had this program but the question was who should be delivering the information to farmers," Rudolphi says. "We knew from a previous study that farmers want to receive agricultural health and safety information from people like bankers, extension personnel, insurance agents, and firefighters - people who have a really good understanding of risk."

But those results might not transfer to mental health information, she notes.

Rudolphi and her co-authors conducted a survey of 300 farmers in three counties in central Wisconsin. They received 159 responses; a 53% response rate. Respondents' median age was 56, and they were predominantly male (90%) and white (93%). This is comparable to the general demographics for farmers in the U.S.

The survey asked respondents to indicate who they wanted to receive information from and how they wanted it delivered. The researchers included both mental health and ag health and safety information in order to note any differences between the two topics.

Overall, respondents were much more open to receiving ag health and safety information from any source, including ag and health safety specialists, firefighters/ems, and extension personnel.

The survey also found that the preferred methods of delivery for both types of information are newspapers and magazines, as well as face-to-face communication. Respondents were least likely to want information from social media, the internet, and phone support lines.

"We were surprised to find that they are really uninterested in the internet when it comes to mental health information," Rudolphi says. There are many resources available online, such as webinars and fact sheets, and even one-on-one internet communication such as a virtual therapist. The survey showed these methods may not be preferred or appropriate.

"Farmers want information face-to-face, and they want it from their innermost circle. Equipping those people with as much information as possible to deal with the stress and subsequent mental health issues of our farmers is important. These results really help us inform dissemination and creation of future resources," Rudolphi says.

"It's much more labor intensive; the quick and easy solution would be to host and post a webinar that could have wide reach. But I think it speaks to this population; they're still a very close-knit group. They really rely on face-to-face contact; that's much more valuable to them," she adds.

Rudolphi led MHFA trainings in Wisconsin for families and friends of farmers. However, she notes that bankers and insurance agents also expressed interest in the classes, because they often have firsthand knowledge of stressors in a farmer's life and they want to be able to help. When trained correctly, they may become part of the farmer's close network of support.

Understanding the reasons behind the survey responses is a topic of future studies, Rudolphi says, and that may point to ways to expand the network of people who farmers trust to provide mental health information to them.

Rudophi is also planning to replicate the study in Illinois. "We're looking to see if there's a program that's more manageable but achieves the same goals and can be distributed statewide," she says.