Mechanism underlying the development of diabetes and fatty liver illuminated 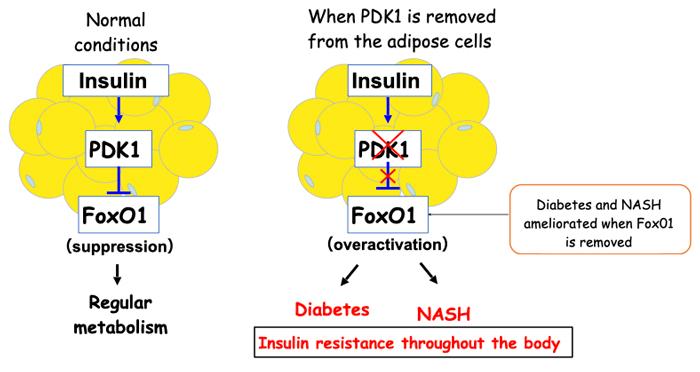 NASH is a chronic liver disease often associated with diabetes. It sometimes progresses to more serious conditions such as liver cirrhosis and liver cancer. However, the mechanism by which NASH develops is ambiguous and no approved medication for the disease is available.

These findings were published in the American scientific journal 'Proceedings of the National Academy of Sciences of the USA' on May 11, 2020.

Diabetes and NASH develop as a result of insufficient action of the hormone insulin in fat cells.

This insufficient action of insulin in fat cells leads to FOXO1 overactivation, which in turn causes diabetes and NASH to develop.

There is a demand for better diabetes medication and, furthermore, there is currently no available treatment for NASH.

The pathway uncovered in this study would serve as a potential target for the development of new medications for these conditions.

In Japan, more than 10 million people suffer from diabetes, which can lead to a wide variety of health problems. Prevention of diabetes and diabetes-associated diseases is an important medical issue worldwide. NASH is a health problem often associated with diabetes. NASH develops from fatty liver and may progress into more serious conditions such as liver cirrhosis and liver cancer. However, the mechanistic relationship between diabetes and NASH is unclear and no medication for NASH is currently available.

Fat cells, or adipocytes, play an important role in regulating the entire body's metabolism. The impairment of adipocyte functions is thought to contribute to the development and progression of various diseases, including diabetes and NASH. However, the mechanism by which adipocyte dysfunction triggers these diseases is not fully understood.

Professor Ogawa's research team has found that insufficient action of insulin in adipocytes results in the overactivation of the protein FoxO1, which in turn leads to the development of diabetes and NASH through the alteration of the entire body's metabolism. The link between insufficient action of insulin in adipocytes and NASH hasn't been proposed until now. In addition, the research team discovered that the overactivation of FoxO1 caused an abundant increase in leukotriene B4 (*1), and that this inflammation-causing substance plays an important role in the onset of metabolic dysfunction.

Summary of the Discovery

Insulin is an important hormone that regulates the metabolism of the entire body, and insufficient action of insulin, often called "insulin resistance", serves as a basis for various diseases. Professor Ogawa's team generated mice in which PDK1, a protein essential for insulin action, was deficient only in the adipocytes. These mice exhibited inefficient insulin action not only in adipocytes but also throughout the body, which lead to the development of diabetes and NASH.

Insulin is known to suppresses the activity of the protein FoxO1 via PDK1 activation. Therefore, the team generated mice which lacked FoxO1 and PDK1 only in their adipocytes to test whether overactivation of FoxO1 contributes to the development of diabetes and NASH, and found that these two conditions did not manifest in the mice at all.

These results indicate that inefficient insulin action in adipocytes triggers diabetes and NASH via FOXO1 overactivation, culminating in insulin resistance throughout the whole body (Figure 1).

The researchers further examined the mechanism as to how the overactivation of FoxO1 influences the functions of other organs. They subsequently revealed that FoxO1 is capable of increasing the amount of the protein 5-lipoxygenase (Figure 2). 5-lipoxgenase is a protein responsible for the production of the inflammatory substance leukotriene B4. In mice with adipocyte-specific PDK1 deficiency, inhibition of the production or the function of leukotriene B4 ameliorated diabetes (*1), indicating that the overactivation of FoxO1 triggers diabetes through leukotriene B4 activity. The team also revealed that the overactivation of FoxO1 and the consequent upregulation of 5-lipoxgenase also occurred in the adipose tissues of obese regular mice fed a diet containing a large amount of fat.

This research revealed that diabetes and NASH develop as a result of insufficient action of insulin (i.e. insulin resistance) in adipocytes, which led to the exaggerated activation of FoxO1 and subsequent upregulation of leukotriene B4.

The link between insufficient insulin action in adipocytes and NASH onset, as well as insulin's ability to control the production of leukotriene B4 are new discoveries that had not been hypothesized.

How can these new research findings be applied to medical care?

In Japan, at least 3 million patients suffer from NASH, however there is no approved medication available for the disease. The findings uncovered by this research may pave the way for the development drugs for NASH that target the "insufficient action of insulin in adipocytes".

Drugs that inhibit the production or the function of leukotriene B4 have already been developed; some of which have been previously utilized to treat asthma in some countries. Therefore, drug repositioning (*2) using these existing drugs presents a promising option for the development of new diabetes medication.