From meadow to plate: The cultured meat that replaces animals with grass 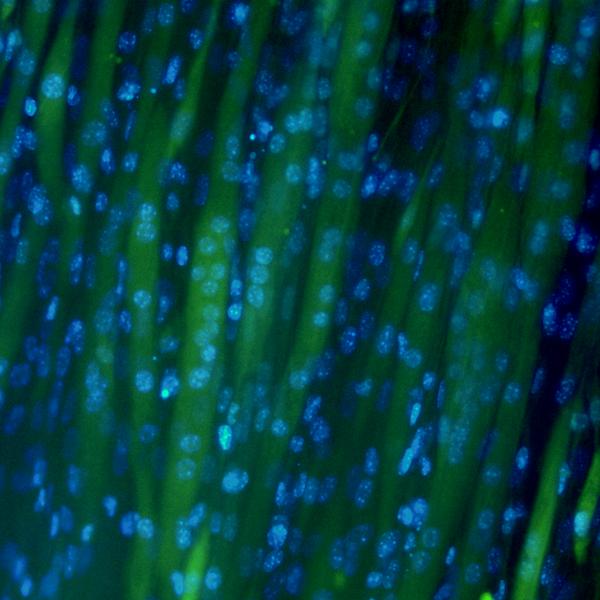 An affordable lab system that uses grass blades to turn cells into cultured meat has been developed at the University of Bath in the UK.

Researchers have successfully taken grass from the university's campus and used it to create a scaffold that animal cells can attach to and grow on. The resulting tissue has the potential to be used both as lab-made meat and as human muscle tissue to repair or replace tissue which has been damaged or lost through injury or disease.

The first step in the new bioengineering process involves emptying grass blades of their native cells in a process known as decellularisation. The decellularised blades are then seeded with a set of cells derived from a mouse cell line (these cells would eventually be replaced by bovine stem cells). The introduced cells stick to the scaffold's surface, multiply and form links with neighbouring cells, eventually growing as a cell mass to form new 3D tissue.

There are several challenges researchers must overcome when looking for a suitable scaffold on which to engineer new muscle tissue. First, the scaffold must be one cells can readily attach to the surface. It must then allow these cells to proliferate and align in a way that precisely mimics the fibres of the natural tissue they are replicating (with muscle fibres, for instance, all the cells need to contract and relax in tandem). Second, for scale-up, the scaffold must be cost-effective and straightforward to manufacture. For lab-grown meat, there is a third challenge: the scaffold must be edible to humans, even if not highly digestible (as is the case for grass).

Dr Paul De Bank, who led the research, said: "When we were looking for a scaffold for our cells, we wanted to find something that was both sustainable and edible. I thought along the lines of a decellularised natural material because cellulose (which grass is largely made of) is edible, but also because grass has aligned grooves that I hoped would allow the cells to line up together to make the fibres we needed - and it worked!"

He added: "When we eat beef, we're partly eating the grass the cows have grazed on in their lifetime. What's neat about our study is that it shows that we can directly replace the animals with the grass they eat. Our system needs to be scaled up but I'm hopeful that sooner rather than later, we could have a meat product on the market based on grass."

The adhesion of the animal stem cells to the grass surface was found to be around 35%, which is considered a good result. "Often, decellularised plant scaffolds need to be chemically modified to get cells to grow on them. The great thing we've found with grass is that we get significant adhesion without further processing steps." said Dr De Bank, adding: "We are, however, hoping to find a way to increase this adhesion - we have a new PhD student who will be working on this, exploring ways to optimise cell attachment and growth.

The next big challenge will be scaling up this process to generate sufficient quantities of both cells and scaffold material in order to produce a significant quantity of muscle tissue. If this is successful then - one day - consumers may be able to buy grass-reared meat with a clear conscience, free from the environmental and animal-welfare concerns many are wrestling with today.