Manipulating superconductivity using a 'mechanic' and an 'electrician' 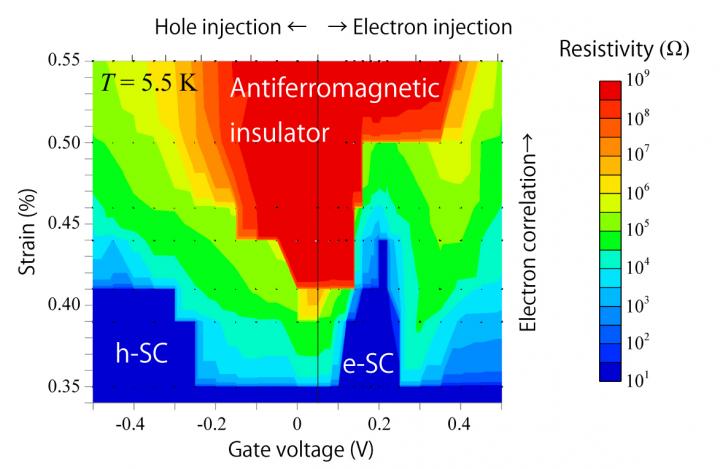 In the strongly correlated materials such as cuprate high-temperature superconductors, superconductivity can be controlled either by changing the number of electrons or by changing the kinetic energy, or transfer energy, of electrons in the system.Although a large number of strongly correlated materials have been examined with different parameters to understand the mechanism of superconductivity, the range of parameter control is always limited. A versatile experimental method to achieve simultaneous control of the number and the transfer energy of the electrons has been long desired.

A flexible electric-double-layer transistor (EDLT), or "correlated" transistor, composed of an organic strongly correlated material was constructed (Fig. 1) by researchers at RIKEN, Institute for Molecular Science (IMS), Nagoya University and Toho University. The number of electrons can be controlled by gate voltages of the EDLT, and the transfer energy of electrons can be controlled by bending the EDLT substrate. They found that the system changed from an insulator to a superconductor in both cases of increasing and decreasing electron numbers. Conditions for these superconducting states in the above two cases, however, were found to be fundamentally different. In addition, another superconducting state emerged when the substrate was bent. The present result was published online on Science Advances on May 10, 2019.

Researchers fabricated the EDLT using a crystal of the organic strongly correlated material made of BEDT-TTF (bis(ethylenedithio)tetrathiafulvalene) molecules (Fig. 1). By applying the gate voltage on to the surface of the crystal, the number of electrons can be increased (electron doping) and decreased (hole doping). This EDLT device is flexible, and the transfer energy can be controlled by applying mechanical force (strain) from the back side of the EDLT. The researchers successfully controlled superconductivity in an identical sample, by precisely changing both the gate voltage and the strain.

The two-dimensional phase diagram (Fig. 2) was thus obtained using the single sample. The diagram shows the nature of the superconducting phase transition, which has been anticipated from data collected from many different samples before this device appears. Therefore this newly developed experimental method accelerates to obtain the phase diagrams. More fundamentally, drawing the full phase diagram from the same sample enables us to obtain more reliable results regardless of the effects of impurity and of difference in crystal structures.

This experimental method can apply to various organic strongly correlated materials. One interesting example is the quantum spin liquid in which the directions of electron spins are moving randomly even at 0 Kelvin. Experiments on the quantum spin liquid will reveal the relationship between superconductivity and magnetism (arrangement of electron spins). It is also notable that the phase diagram of strongly correlated electron system is a significant target of quantum simulators. The present result provides one possible standard solution for those newly developing calculation methods.