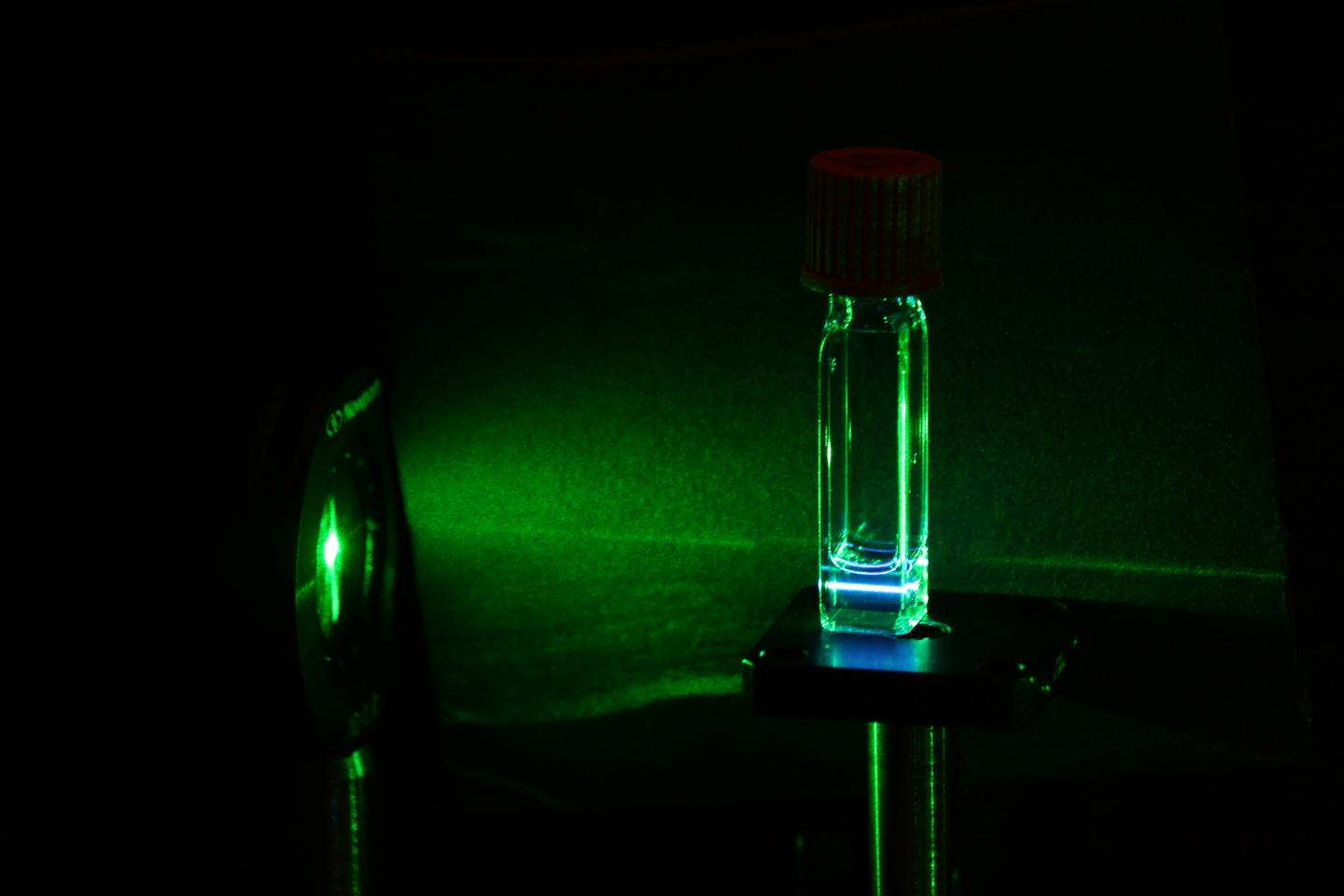 Materials scientists at the University of California, Riverside and The University of Texas at Austin have demonstrated that it is possible to achieve photon up-conversion, the emission of light with energy higher than the one that excites the material, when using carefully designed structures containing silicon nanocrystals and specialized organic molecules.

High energy light, such as ultraviolet laser light, can form free radicals able to attack cancer tissue. Ultraviolet light, however, doesn't travel far enough into tissues to generate therapeutic radicals close to the tumor site. On the other hand, near-infrared light penetrates deeply but doesn't have enough energy to generate the radicals.

While photon up-conversion can overcome this limitation, up-converted materials have either low efficiency or are based on toxic materials. Silicon is well-known for being nontoxic, but until now, researchers have not been able to demonstrate that silicon nanocrystals can up-convert photons, leaving this promising cancer treatment tantalizingly out of reach.

A group led by UC Riverside materials science doctoral student Pan Xia attacked this problem by carefully studying the surface chemistry of silicon nanocrystals. The group learned how to attach ligands, which help bind molecules together, to the nanoparticle that are specifically designed to transfer the energy from the nanocrystals to surrounding molecules.

The team then shined laser light into the solution. They found silicon nanocrystals with appropriate surface ligands can rapidly transfer the energy to the triplet state of surrounding molecules. A process called triplet-triplet fusion then converts the low-energy excitation to a high energy one, resulting in the emission of a photon at shorter wavelength, or higher energy, than the one originally absorbed by the nanoparticle.

"This work is very fundamental," said co-author Lorenzo Mangolini, an associate professor of mechanical engineering, whose group made the silicon nanocrystals. "The novelty is really how to get the two parts of this structure -- the organic molecules and the quantum confined silicon nanocrystals -- to work together. We are the first group to really put the two together."

Co-author Sean Roberts, an assistant professor of chemistry at The University of Texas at Austin, used ultrafast lasers to investigate how energy is transferred in this hybrid structure, and determined the process is both amazingly fast and efficient.

"The challenge has been getting pairs of excited electrons out of these organic materials and into silicon. It can't be done just by depositing one on top of the other," said Roberts. "It takes building a new type of chemical interface between the silicon and this material to allow them to electronically communicate."

The discovery could also lead to improved photocatalysis, which uses light to drive chemical reactions.

"Photocatalysts generally only work with ultraviolet light or violet light, so this is a way to generate that from the rest of the solar spectrum," Tang said.