The lower mantle can be oxidized in the presence of water 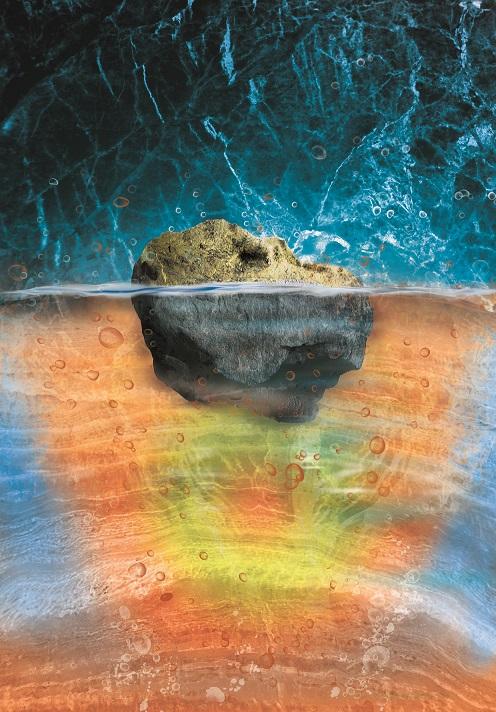 IMAGE: The schematic artwork shows a boundary within the lower mantle at the depth of 1900 km. Below 1900 km, the interaction between water and mantle is triggered.

"One of the major lower mantle compositions, ferropericlase (Mg,Fe)O, turns into a pyrite-type structure upon meeting water. This intriguing chemical reaction only occurs at Earth's deep lower mantle which is defined in depths between 1900 and 2900 km" said Qingyang Hu from HPSTAR. "The reaction produces so-called oxygen excessive phases, or simply superoxides. The lower mantle is oxidized in the presence of water." Generally, when all the oxygen atoms in a compound are bonded with metal atoms, they are called oxides. However, if a compound has paired oxygen atoms, like oxygen-oxygen bonding, it becomes a superoxide. Although superoxide is rarely found in nature, it might be common in Earth's deep lower mantle.

"We also found that olivine and its high-pressure phase wadsleyite, the dominating minerals in the upper mantle, decompose to generate superoxides when subducting down into the deep mantle with water." added by Jin Liu from at HPSTAR. Few approaches are available for scientists to probe into the lower mantle mineralogy given its depth. "Our experiments are very challenging. We input appropriate parameters like pressure, temperature, and starting minerals. Then we investigated the outputs including chemical reactions, new mineral assemblages, and their density profiles. Those parameters allow us to better constrain the nature of the lower mantle and its oxidation state." Contrary to the paradigm that the lower mantle is highly reduced, our results indicate that the deep lower mantle is at least locally oxidized wherever water is present.

The team members proceeded with minerals existing on Earth's surface, by squeezing them between two pieces of diamond anvils to generate about 100,000,000 times the atmospheric pressure at sea level, heating them up using infrared laser, before analyzing the samples using a battery of x-ray and electron probes. The experiments have mimicked the extreme pressure-temperatures conditions found in Earth's deep lower mantle.

Previous experiments explored a dry mineral assembly in the absence of water. Those experiments reported that bridgmanite (and/or post-bridgmanite) and ferropericlase are the most abundant and stable minerals throughout the lower mantle. However, when water is introduced, ferropericlase would be partially oxidized to superoxide under the deep lower mantle conditions. The superoxide is verified to stay in harmony with bridgmanite and post-bridgmanite.

This new water-mantle chemistry can be closely linked to the water cycling in the solid Earth. Every year, billions of tons of ocean water falls into the deep Earth at tectonic plate boundaries. While some water returns via underwater volcanoes and hot vents, others goes deep into the Earth's interiors. "Our experiments indicate the deep water is an essential part of mantle chemistry. The water cycling can extend to the deep lower mantle where water has extraordinary oxidation power, producing highly oxidized superoxide and releasing hydrogen." suggested by Dr. Ho-kwang Mao from HPSTAR. "The lower mantle can be oxidized and reduced at the same time."