Life at its limits 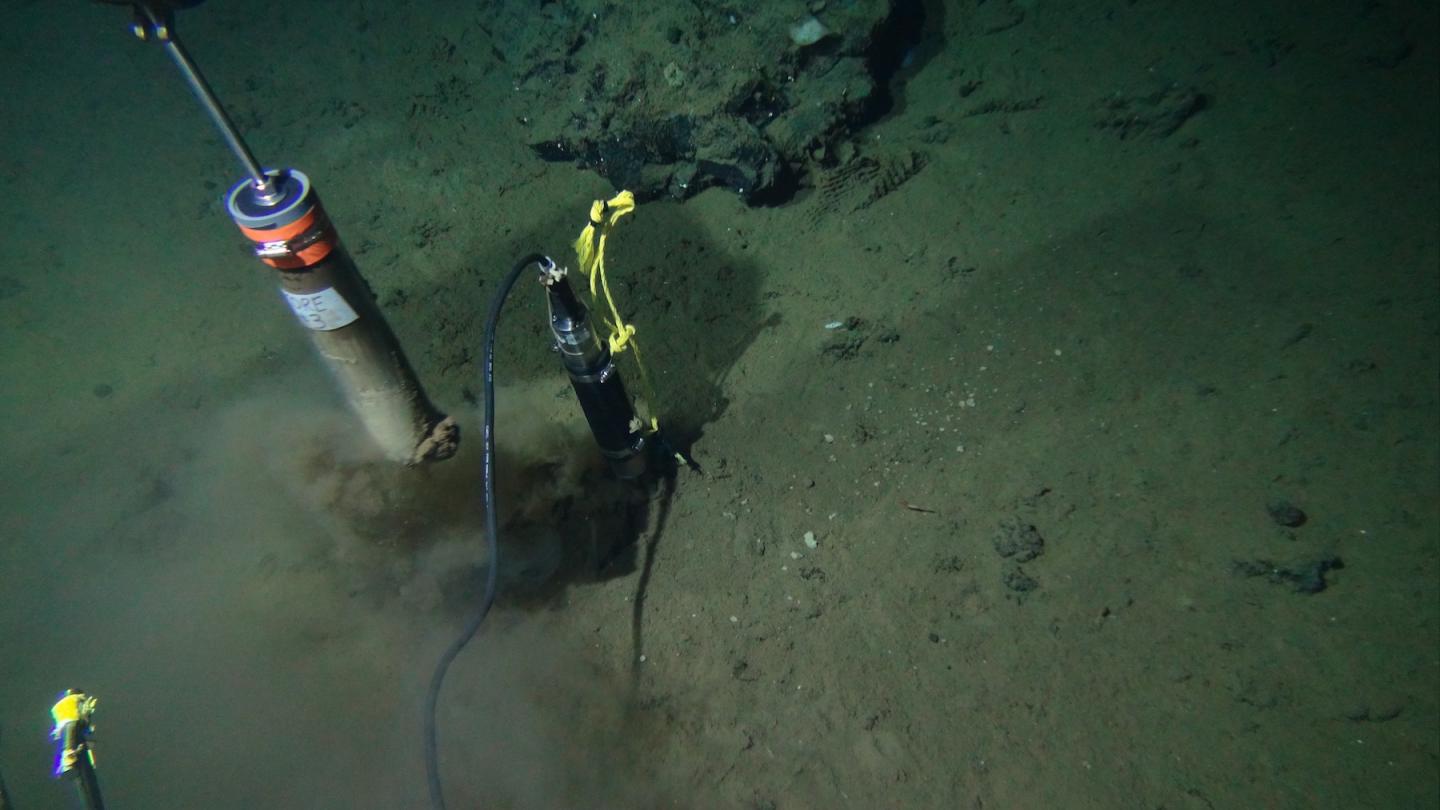 IMAGE: Photograph taken from ALVIN, a manned deep-ocean research submersible, taking sediment cores at the ocean floor of the Dorado Outcrop in 2014.
Credit: Geoff Wheat, NSF OCE 1130146, and the National...

All life needs energy. Where there is not enough energy available, there can be no life. But how much is enough?

A new study led by James Bradley of the German Research Centre for Geosciences GFZ and Queen Mary University of London provides a surprising answer: Microbes in the seabed survive on far less energy than has been shown ever before. The international team is publishing its results in the journal Science Advances.

James Bradley, who started this work at the University of Southern California (USA) and continued it at GFZ, says: "When we think about the nature of life on Earth, we see plants, animals, microscopic algae and bacteria thriving on the Earth's surface and in the oceans - constantly active, growing and reproducing. But here we show that an entire biosphere of microorganisms - as many cells as are found in all the Earth's soils or oceans - has barely enough energy to survive. Many of them simply exist in a mostly inactive state. They do not grow, do not divide and do not develop further. These microbes are not dead, but use far less energy than previously thought to survive."

The global inventory and modelling revealed another important finding: Although oxygen is the most important energy source for most familiar life on Earth, it occurs in only 2.7 percent of ocean sediments, they are "oxic". The vast majority is "anoxic". There, microbes produce methane (in 64.3 percent of the sediments), and oxidise sulphate (33 percent of the sediments) as energy sources. Methane is a powerful greenhouse gas, and the study underlines the importance of methane formation on the seabed. Although practically inactive, the microbial cells contained in the Earth's marine sediments are so numerous and survive on such exceptionally long time scales that they act as a major driver of the Earth's carbon and nutrient cycle and even influence the concentration of CO2 in the Earth's atmosphere over thousands to millions of years.

The researchers, including researchers Ewa Burwics and Andrew Dale from GEOMAR - Helmholtz Centre for Marine Research, used data from drill cores worldwide for their work, exploring the last 2.6 million years of Earth history, known as the "Quaternary" period. The data were incorporated into a model that depicts the global availability of energy in the seabed. The researchers then created a global picture of the biosphere beneath the seafloor, including the most important life forms and biogeochemical processes.

By extending the habitable limits of life to environments with lower energy availability, the results could feed into future studies of where, when and how life originated on the early Earth and where life could be found elsewhere in the solar system. The results raise fundamental questions about our definitions of what constitutes life and the limits of life on Earth and elsewhere. With so little available energy, it is unlikely that organisms would be able to reproduce or divide, but instead use this tiny amount of energy for "maintenance" - replacing or repairing their damaged parts. It is therefore likely that many of the microbes found at great depths beneath the seabed are the remains of populations that lived in shallow coastal areas thousands to millions of years ago. Unlike organisms on the Earth's surface that operate on short (daily and seasonal) time scales corresponding to the Sun, it is likely that these deeply buried microbes exist on much longer time scales, such as the movement of tectonic plates and changes in oxygen levels and circulation in the oceans.

"The results of the research challenge not only the nature and limits of life on Earth, but also elsewhere in the universe," Dr. Bradley added. "If there is life on Mars, for example, or on Europa, it would most likely seek refuge underground. If microbes require only a few zeptowatts of power to survive, there could be remnants of surviving life beneath these planets' icy surfaces. These organisms might have been dormant for a long time, but would still be technically 'alive'.