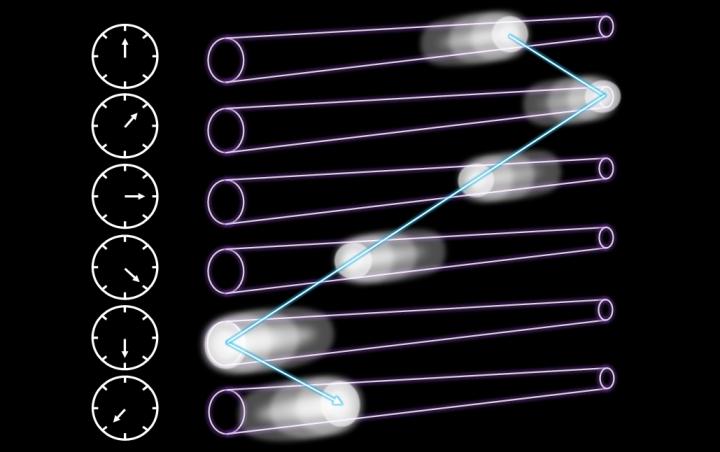 Osaka, Japan --Straight-line constant-speed propagation in free space is a basic characteristic of light. In a recent study published in Communications Physics, researchers from Osaka University discovered the phenomenon of reciprocating propagation of laser pulse intensity in free space.

Spatiotemporal couplings have been recently used to produce light with tunable group-velocity, direction, and trajectory in free space. For example, the flying focus (a moving laser pulse intensity in the extended Rayleigh length), where longitudinal chromatism and temporal chirp are combined to control the spectrum-dependent focus-separation in space and spectrum-dependent pulse-location in time, respectively, has arbitrarily tunable propagating group-velocity and direction in space and time.

However, in the previous result, the flying focus can only propagate along a certain direction either forward or backward, although the propagating group-velocity can be freely controlled.

This intriguing phenomenon changes the traditional understanding of light propagation and may be applied in both fundamental and applied physics.

"For example, in our radiation pressure simulation, it can produce an on-axis reciprocating trapping or pushing force for a small or big sphere, respectively, in the Rayleigh scattering regime," says Zhaoyang Li.