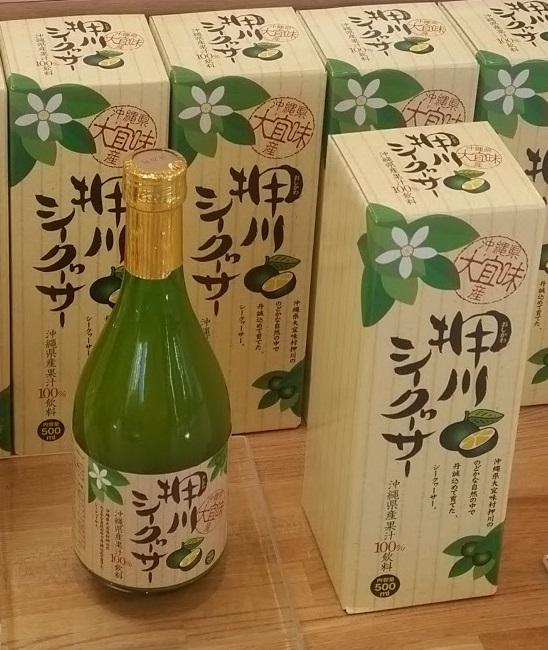 image: Shiikuwasha have an important commercial value in Okinawa and are used to create many different products. Within Okinawa, Oogimi and Katsuyama are the biggest citrus productive area in Okinawa. This image shows products from Oogimi.

Other citrus from Okinawa and mainland Japan, including shiikuwasha and tachibana, are hybrids of this newly discovered wild species with different mainland Asian varieties

Citrus fruits from the mandarin family are popular throughout the world for their tasty and healthy characteristics. Within Japan, the tiny shiikuwasha and the ornamental tachibana are of special cultural and historical importance. However, the origin of these two varieties, and other East Asian citrus, was always something of a mystery, until now.

In a new study, published in Nature Communications, scientists from the Okinawa Institute of Science and Technology Graduate University (OIST), and collaborators from other institutes, analyzed 69 genomes from the East Asian mandarin family, alongside their mainland Asian relatives, to reveal a far-ranging story of isolation, long-distance travel, and hybridization.

The story starts in the Hunan Province of southern China, which is the center of wild mandarin diversity and the genetic source of most well-known mandarins. When the scientists re-analyzed previously published genomic data, they unexpectedly found that wild mandarins of this mountainous region are split into two subspecies.

"We found that one of these mandarin subspecies can produce offspring that are genetically identical to the mother," said Dr. Guohong Albert Wu, a research collaborator at the Lawrence Berkeley National Laboratory in California. "Like many other plants, wild citrus typically reproduces when the pollen of the father combines with the egg of the mother, mixing the genes from both parents in the seed. But we found a subspecies of wild mandarins from Mangshan, in southern China, where the seed contains an identical copy of the mother's DNA without any input from a father. So, the seed grows to be a clone of the mother tree."

Back in Okinawa, the researchers looked more carefully at a strange shiikuwasha-like citrus that produces small, acidic fruit and had been ignored by local farmers since it has little commercial value. To their surprise, they found that this strange citrus represented a previously undescribed species, which they named the Ryukyu mandarin or, more formally, Citrus ryukyuensis. And in contrast to the well-known shiikuwasha, which reproduces clonally (like the subspecies in Mangshan), the new species always reproduces sexually.

They concluded that tens of thousands of years ago a mainland Asian mandarin was transported, either by people or by natural methods, to the land that would become the Ryukyu Islands. There it mated with the native Ryukyu citrus. The researchers traced the ancestry of this mainland Asian mandarin back to Mangshan, where it acquired its ability to reproduce asexually. This ability was passed on to its children.

Thus, all the shiikuwasha varieties found in Okinawa's markets today are descended from this mating, and reproduce asexually, allowing stable varieties like golden shiikuwasha to be propagated from generation to generation.

And what of tachibana and the other East Asian mandarin variations?

"They're all hybrids!" explained Dr. Chikatoshi Sugimoto, Postdoctoral Scholar in OIST's Molecular Genetics Unit. "The tachibana lineage also seems to have descended from the newly described Ryukyu species and another mandarin from China, but its birthplace was probably what is now mainland Japan."

Once they saw the genetic pattern in shiikuwasha and tachibana, the researchers also recognized another half-sibling family comprising various traditional Ryukyuan types--oto, kabuchii, tarogayo, and other unnamed citrus. This family, which the researchers called 'yukunibu' (sour citrus in the native Okinawan language), is much younger than shiikuwasha and tachibana. It arose when the famous kunenbo--also the father of satsuma mandarins--hybridized with the native Ryukyu mandarin. Kunenbo was brought to Okinawa from Indochina around 4-500 years ago by maritime trade. Like the mainland parents of shiikuwasha and tachibana, it was also able to clone itself by seeds, due to its distant Mangshan ancestry, and it passed this trait on to its children.

"It's fascinating to puzzle out the story of mandarin diversification and its relationship to the biogeography of the region," concluded Prof. Dan Rokhsar, Principal Investigator of OIST's Molecular Genetics Unit. "But it also could have commercial value. What other possibly hybrid types are there? Could we create new hybrids that are more resilient to disease or drought, or have other desirable characteristics? By looking into the past, we can create all sorts of possibilities for the future."