IPBES/IPCC: Tackling the biodiversity and climate crises together, and their combined social impacts 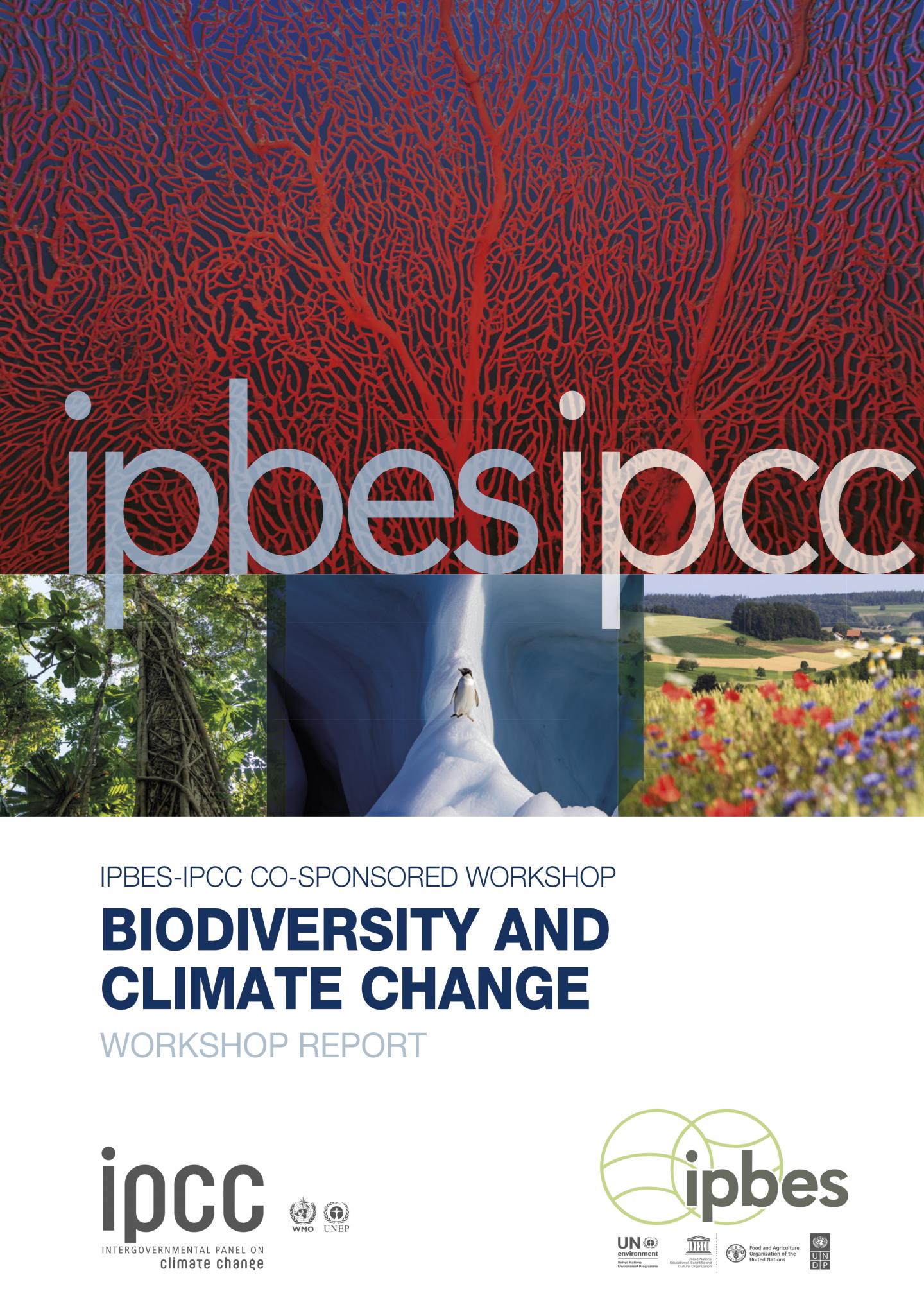 IMAGE: The peer-reviewed workshop report is the product of a four-day virtual workshop between experts selected by a 12-person Scientific Steering Committee assembled by the Intergovernmental Science-Policy Platform on Biodiversity and...

BONN, 10 June - Unprecedented changes in climate and biodiversity, driven by human activities, have combined and increasingly threaten nature, human lives, livelihoods and well-being around the world. Biodiversity loss and climate change are both driven by human economic activities and mutually reinforce each other. Neither will be successfully resolved unless both are tackled together.

This is the message of a workshop report, published today by 50 of the world's leading biodiversity and climate experts.

"Human-caused climate change is increasingly threatening nature and its contributions to people, including its ability to help mitigate climate change. The warmer the world gets, the less food, drinking water and other key contributions nature can make to our lives, in many regions" said Prof. Hans-Otto Pörtner, co-chair of the Scientific Steering Committee.

"Changes in biodiversity, in turn, affect climate, especially through impacts on nitrogen, carbon and water cycles," he said. "The evidence is clear: a sustainable global future for people and nature is still achievable, but it requires transformative change with rapid and far-reaching actions of a type never before attempted, building on ambitious emissions reductions. Solving some of the strong and apparently unavoidable trade-offs between climate and biodiversity will entail a profound collective shift of individual and shared values concerning nature - such as moving away from the conception of economic progress based solely on GDP growth, to one that balances human development with multiple values of nature for a good quality of life, while not overshooting biophysical and social limits."

The authors also warn that narrowly-focused actions to combat climate change can directly and indirectly harm nature and vice-versa, but many measures exist that can make significant positive contributions in both areas.

Among the most important available actions identified in the report are:

Stopping the loss and degradation of carbon- and species-rich ecosystems on land and in the ocean, especially forests, wetlands, peatlands, grasslands and savannahs; coastal ecosystems such as mangroves, salt marshes, kelp forests and seagrass meadows; as well as deep water and polar blue carbon habitats. The report highlights that reducing deforestation and forest degradation can contribute to lowering human-caused greenhouse gas emissions, by a wide range from 0.4-5.8 gigatonnes of carbon dioxide equivalent every year.

Restoring carbon- and species-rich ecosystems. The authors point to evidence that restoration is among the cheapest and quickest nature-based climate mitigation measures to implement - offering much-needed habitat for plants and animals, thus enhancing resilience of biodiversity in the face of climate change, with many other benefits such as flood regulation, coastal protection, enhanced water quality, reduced soil erosion and ensuring pollination. Ecosystem restoration can also create jobs and income, especially when taking into consideration the needs and access rights of indigenous peoples and local communities.

Increasing sustainable agricultural and forestry practices to improve the capacity to adapt to climate change, enhance biodiversity, increase carbon storage and reduce emissions. These include measures such as diversification of planted crop and forest species, agroforestry and agroecology. Improved management of cropland and grazing systems, such as soil conservation and the reduction of fertilizer use, is jointly estimated by the report to offer annual climate change mitigation potential of 3-6 gigatonnes of carbon dioxide equivalent.

Enhancing and better-targeting conservation actions, coordinated with and supported by strong climate adaptation and innovation. Protected areas currently represent about 15% of land and 7.5% of the ocean. Positive outcomes are expected from substantially increasing intact and effectively protected areas. Global estimates of exact requirements for effectively protected and conserved areas to ensure a habitable climate, self-sustaining biodiversity and a good quality of life are not yet well established but range from 30 to 50 percent of all ocean and land surface areas. Options to improve the positive impacts of protected areas include greater resourcing, better management and enforcement, and improved distribution with increased inter-connectivity between these areas. Conservation measures beyond protected areas are also spotlighted - including migration corridors and planning for shifting climates, as well as better integration of people with nature to assure equity of access and use of nature's contributions to people.

Eliminating subsidies that support local and national activities harmful to biodiversity - such as deforestation, over-fertilization and over-fishing, can also support climate change mitigation and adaptation, together with changing individual consumption patterns, reducing loss and waste, and shifting diets, especially in rich countries, toward more plant-based options.

Some focused climate mitigation and adaptation measures identified by the report as harmful to biodiversity and nature's contributions to people include:

Planting bioenergy crops in monocultures over a very large share of land areas. Such crops are detrimental to ecosystems when deployed at very large scales, reducing nature's contributions to people and impeding achievement of many of the Sustainable Development Goals. At small scales, alongside pronounced and rapid reductions in fossil-fuel emissions, dedicated bioenergy crops for electricity production or fuels may provide co-benefits for climate adaptation and biodiversity.

Planting trees in ecosystems that have not historically been forests and reforestation with monocultures - especially with exotic tree species. This can contribute to climate change mitigation but is often damaging to biodiversity, food production and other nature's contributions to people, has no clear benefits for climate adaptation, and may displace local people through competition for land.

Any measures that focus too narrowly on climate change mitigation should be evaluated in terms of their overall benefits and risks, such as some renewable energies generating surges of mining activity or consuming large amounts of land. The same applies to some technical measures too narrowly focused on adaptation, such as building dams and sea walls. Although important options for mitigating and adapting to climate change exist, these can have large negative environmental and social impacts - such as interference with migratory species and habitat fragmentation. Such impacts can be minimized, for instance, by developing alternative batteries and long-lived products, efficient recycling systems for mineral resources, and approaches to mining that include strong considerations for environmental and social sustainability.

The report authors stress that while nature offers effective ways to help mitigate climate change, these solutions can only be effective if building on ambitious reductions in all human-caused greenhouse gas emissions. "Land and ocean are already doing a lot - absorbing almost 50% of CO2 from human emissions - but nature cannot do everything," said Ana María Hernández Salgar, Chair of IPBES. "Transformative change in all parts of society and our economy is needed to stabilize our climate, stop biodiversity loss and chart a path to the sustainable future we want. This will also require us to address both crises together, in complementary ways."

Highlighting the significance of the co-sponsored workshop, Dr. Hoesung Lee, Chair of the IPCC, said: "Climate change and biodiversity loss combine to threaten society - often magnifying and accelerating each other. By focusing on synergies and trade-offs between biodiversity protection and climate change mitigation and adaptation, this workshop advanced the debate on how to maximize benefits to people and the planet. It also represented an important step in collaboration between our two communities."

"It may be impossible to achieve win-win synergies, or even manage the tradeoffs between climate and biodiversity actions in every single patch of a landscape or seascape," said Prof. Pörtner, "But achieving sustainable outcomes becomes progressively easier when integrating a mix of actions at larger spatial scales, through cross-border collaboration and joint consultative spatial planning, which is why it is important to also address the lack of effective governance systems and mechanisms to improve integration between solutions for climate change and biodiversity."