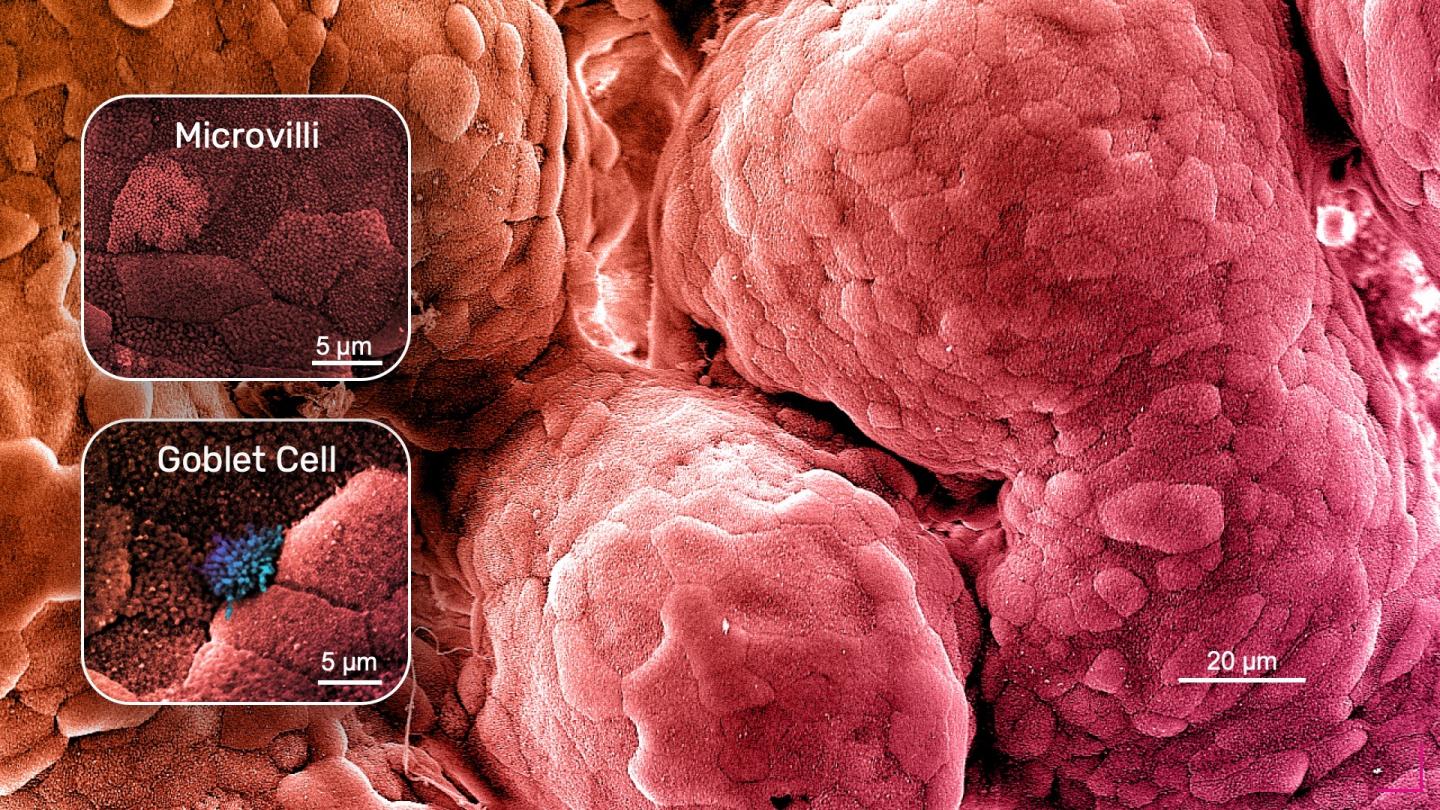 IMAGE: SEM image of the Intestine-Chip showing the presence of a well-developed continuous brush border consisting of densely packed microvilli, as well as mature specialized cell types such as mucus producing...

BOSTON, Mass., January 14, 2020 -- Emulate, Inc. announced today a published study in collaboration with Johns Hopkins University School of Medicine, that demonstrated superior functionality of the Duodenum Intestine-Chip populated with organoids, compared to organoids alone. The study, published in the peer-reviewed journal, eLife, showed that the Intestine-Chip produced a nearly identical global transcriptomic profile compared to human intestine duodenum tissue, whereas the signature from the organoids alone had significant differences from the human intestine tissue. The authors further showed that the similarities at the transcriptomic level also resulted in significantly more accurate physiological function of the Intestine-Chip compared to organoids alone. These results demonstrate the potential of the Intestine-Chip to provide a robust system to accurately recreate human intestine tissues for highly predictive and human-relevant preclinical drug assessment, including drug transport, metabolism, and drug-drug interactions.

In this research, Emulate scientists in collaboration with scientist at Johns Hopkins University School of Medicine established the Duodenum Intestine-Chip from organoids derived from endoscopic biopsies of healthy adult human donors and primary human intestinal microvascular endothelial cells derived from human small intestine. The Intestine-Chip recreated the barrier function and multilineage differentiation of adult human intestinal tissue. Global gene expression was assessed by RNA-sequencing analysis and showed that the profile of the Intestine-Chip and freshly isolated human adult duodenum tissue were remarkably similar; in contrast, the organoids alone from the same donor showed significant differences in RNA-sequencing analysis. Additionally, the biology for drug transporters and drug metabolizing enzymes of the intestine remained intact in the Duodenum Intestine-chip, which is not effectively modeled with current animal testing due to the species-specific nature of these drug transporters, drug metabolizing enzymes, and the factors regulating them.

"Using our Intestine-Chip, we are able to accurately recreate key functions of the human duodenum. These findings show a path forward to using a more human-relevant and robust system to better predict pharmacokinetics and drug-drug interaction," said Geraldine A. Hamilton, President and Chief Scientific Officer of Emulate. "Today, we see the value of using our Intestine-Chip product with organoids as a leading-edge preclinical testing method. Further in the future, we envision exciting potential applications for our Intestine-Chip to utilize cells isolated from individual patients to be used for personalized medicine."

Findings from the published functional testing demonstrated that the Duodenum Intestine-Chip more accurately recreated several aspects of the human intestine, compared to organoids or Caco-2 models, including:

Expression of drug transporters. Expression levels of several important transporters for efflux (MDR1, CVRP, MRP2, and MRP3) and uptake (PEPT1, OATP2B1, OCT1, and SLC40A1) were similar for the Duodenum Intestine-Chip and freshly isolated duodenal tissue, but not in the previously described Caco-2 Intestine-Chip which showed significant variation in expression of OATPB1 and OCT1.

Localization and function of drug transporters. In vivo-relevant localization of the luminal efflux pumps, MDR1 and BCRP, and the uptake pump PEPT1 were shown to co-distribute together with villin, a marker specific for apical cell membrane, at the intestinal cell brush border in Duodenum Intestine-Chip. The MDR1 activity was confirmed by measuring the intracellular accumulation of rhodamine 123 in the presence and absence of specific MDR1 inhibitor, vinblastine, across the Duodenum Intestine-Chip.

Study results were derived from testing of the Duodenum Intestine-Chip established from individual donors of biopsy-derived organoids. The ability to establish the Duodenum Intestine-Chip composed of the cells isolated from individual patients opens the possibility of personalized medicine. Applications include personalized preclinical testing and personalized clinical pharmacology to assess a range of measures, including: inter-individual differences in drug disposition and responses, studies of the effect of genetic polymorphisms on pharmacokinetics and pharmacodynamics, as well as decoupling of the effect of various factors such as age, sex, disease state, and diet on metabolism, clearance, and bioavailability of drugs.