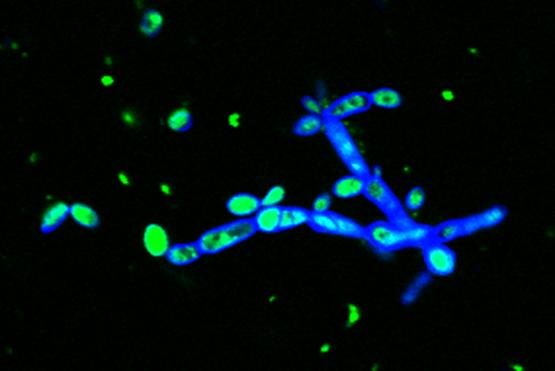 ASPB is pleased to announce the publication of research with significant implications for nitrogen nutrition in crop plants.

Nitrogen supply limits crop yields, but application of excess nitrogen fertilizer can pollute water and is expensive. Therefore, scientists are looking for beneficial microbes that could assist in providing plants with nitrogen by fixing nitrogen--converting atmospheric nitrogen to forms that plants can use. Such "green fertilizers" could improve grain yields without the need for application of chemical nitrogen fertilizers. Legumes such as soybeans have symbiotic bacteria that fix nitrogen, but most important grain crops, including rice, lack these bacteria. To address this problem, a study published in The Plant Cell used microbes that were discovered in an unusual and highly nutrient-limited environment, cattails growing in a pool of tailings from a uranium mine. The fungus Rhodotorula mucilaginosa JGTA-S1 (JGTA-S1 refers to the specific strain) was isolated from narrowleaf cattail (Typha angustifolia), and this pink-colored fungus improves growth in its host cattails. In their previous work, the authors sequenced the genome of this fungus and discovered that JGTA-S1 has several genes that support its role as a plant-associated fungus. Surprisingly, in the current study the researchers also discovered that this fungus contains nitrogen-fixing bacteria, which may allow it to fix nitrogen.

The authors of this study next set out to determine whether JGTA-S1 could use the important crop plant rice as a host and promote rice growth and nutrition, focusing on nitrogen in particular. Indeed, the authors showed that JGTA-S1 colonizes rice as a host and increases the nitrogen content in the plant. Furthermore, the authors studied the endosymbiotic bacteria and their role in fungal and plant growth. JGTA-S1 can grow in nitrogen-free media, with nitrogen fixation assisted by nitrogen-fixing bacteria, including Pseudomonas stutzeri. Nitrogen-fixing bacteria are key to JGTA-S1's viability and crucial for the increased biomass and ammonium in fungus-treated plants. The fungus associates with the plant to form filamentous structures, and the P. stutzeri bacteria then penetrate these structures. Therefore, this fascinating interaction among organisms from three kingdoms (plants, fungi, and bacteria) may hold the key to improving nitrogen nutrition in rice and perhaps other crop plants.

As next steps, corresponding author Anindita Seal said: "Improving nitrogen nutrition in crop plants is a challenge for scientists. It would be interesting to see whether this three-kingdom interaction can be used to improve nitrogen nutrition in plants other than rice or whether the beneficial role of the endofungal bacteria is plant specific."