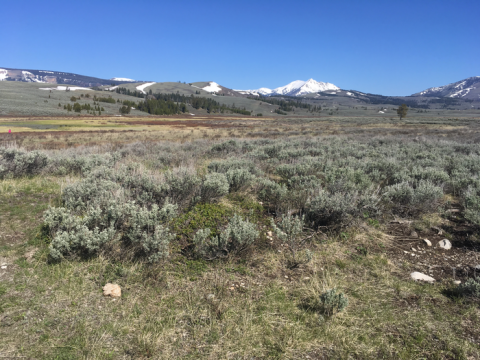 Though invasive weeds can devastate native plant communities, a recent study featured in the journal Invasive Plant Science and Management shows that efforts to manage those weeds can also cause harm.

In the arid rangelands of the western United States, winter annual weeds can negatively impact both forage production and biodiversity – altering fire patterns and disrupting natural ecosystems. One method used to control these unwanted weeds is to suppress the soil seedbank using the preemergent herbicide indaziflam. Indaziflam is nonselective and provides residual control in the top few centimeters of the soil.

A team from Montana State University set out to explore the efficacy of indaziflam in controlling nonnative annual mustard plants that were invading Yellowstone National Park. They also wanted to understand the potential effects of the herbicide on the diverse native sagebrush communities that provide forage and habitat for wildlife.

A two-year study showed that indaziflam was highly effective at controlling the emergence of annual mustard by depleting the soil seedbank. Unfortunately, though, the richness and diversity of the nontarget plant community was also significantly impacted. Specifically, forbs were impacted, but perennial grasses were not. Annual forb richness was reduced by approximately 50 percent, suggesting some annual forbs may be tolerant to the herbicide or emerge from deeper in the soil.

“Based on our findings, we recommend limiting the use of indaziflam to invaded areas where there are less forbs and where seedbanks are largely composed of undesirable species,” says Jordan Meyer-Morey, a member of the Montana State University research team.