Improving quantum dot interactions, one layer at a time 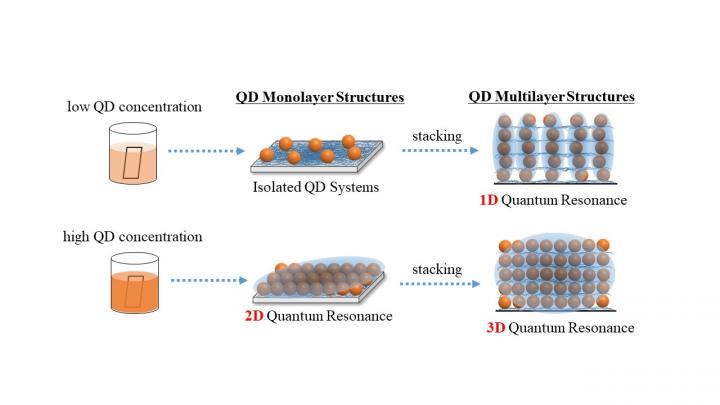 Osaka City University scientists and colleagues in Japan have found a way to control an interaction between quantum dots that could greatly improve charge transport, leading to more efficient solar cells. Their findings were published in the journal Nature Communications.

"Our simple method for fine-tuning quantum resonance is an important contribution to both optical materials and nanoscale material processing," says Kim.

Quantum dots are nanometer-sized semiconductor particles with interesting optical and electronic properties. When light is shone on them, for example, they emit strong light at room temperature, a property called photoluminescence. When quantum dots are close enough to each other, their electronic states are coupled, a phenomenon called quantum resonance. This greatly improves their ability to transport electrons between them. Scientists have been wanting to manufacture devices using this interaction, including solar cells, display technologies, and thermoelectric devices.

However, they have so far found it difficult to control the distances between quantum dots in 1D, 2D and 3D structures. Current fabrication processes use long ligands to hold quantum dots together, which hinders their interactions.

Kim and his colleagues found they could detect and control quantum resonance by using cadmium telluride quantum dots connected with short N-acetyl-L-cysteine ligands. They controlled the distance between quantum dot layers by placing a spacer layer between them made of oppositely charged polyelectrolytes. Quantum resonance is detected between stacked dots when the spacer layer is thinner than two nanometers. The scientists also controlled the distance between quantum dots in a single layer, and thus quantum resonance, by changing the concentration of quantum dots used in the layering process.